Maniera moderna. The exhibition's selection of works reflects the versatility of Mollino's oeuvre: on view are his drawings and architectural plans, furniture and furnishings, his race car "Bisiluro", his photomontages, Polaroids of female nudes, his essays on architecture, photography and downhill skiing, as well as other archival material. A photographical essay by Armin Linke provides an overview of Mollino's constructions and their state of preservation, Simon Starling presents a film in which the camera moves close up along the curves of a Mollino chair, and Nairy Baghramian the installation "Tea Room" which makes reference to Mollino's surrealistic installation Te' numero 2. 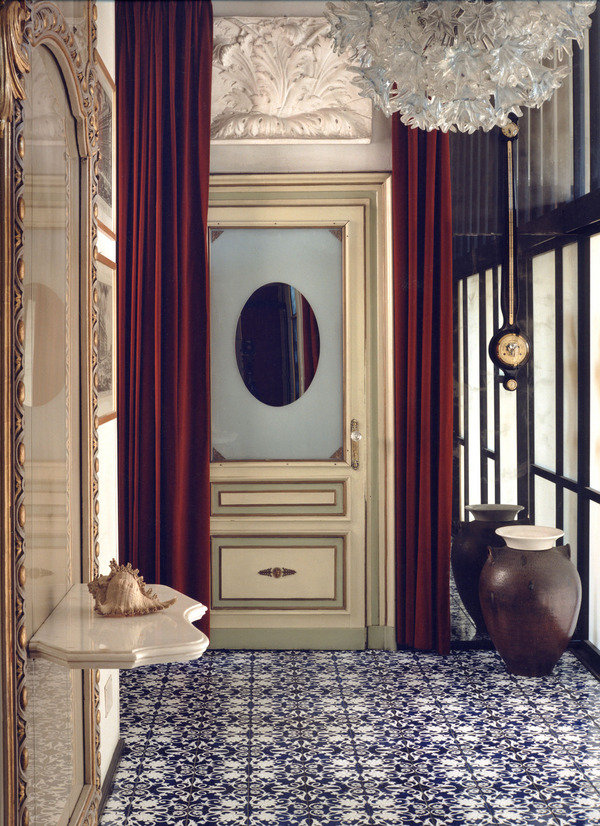 The exhibition's selection of works reflects the versatility of Carlo Mollino's oeuvre: on view are his drawings and architectural plans, furniture and furnishings, Mollino's race car "Bisiluro", his photomontages, Polaroids of female nudes, his essays on architecture, photography and downhill skiing, as well as other archival material. A photographical essay by Armin Linke created for the exhibition provides an overview of Mollino's constructions and their state of preservation.

Mollino's buildings were long handled with negligence. It is significant that in 1960 the Turin city council voted to demolish the Società Ippica Torinese, which had only been completed in 1940. Although Carlo Mollino has gained increasing attention in recent years, he is still not fully recognized as an architect. In contrast, his furniture has long been on great demand by collectors: in 2005 one of his tables was sold at auction for 3.8 million dollars. Contemporary artists, such as Karole Armitage and David Salle, Nairy Baghramian, Steven Claydon, Armin Linke, Mai-Thu Perret, Heidi Specker and Simon Starling, refer explicitly in their work to Carlo Mollino. The Casa Mollino is a popular site for shoots among photographers like Jürgen Teller and others.

Born in 1905 in Turin, Mollino's career begins before, during and after the Second World War. Mollino learns the basics of architecture from his father Eugenio, a considered engineer and architect in the first quarter of the 20th century. This eases his entry into the profession, and he enjoys a certain degree of financial freedom from the beginning. In 1931, after completing his training, his father takes him on in his office. In 1936 the interiors of Casa Miller, Carlo Mollino's residence and studio, are created. As it is the case with other architects born in the early 20th century, opposites are a characteristic element in his works: In his first commissioned work, the headquarters of the Federazione Agricoltori Cuneo (1933-35), Mollino makes use of the severity and monumentality of the fascist style. Later he distances himself permanently from political regimes. His second commission, the Società Ippica Torinese (1937-1940), already exhibits the dynamic curves that would remain typical of his work. With these Mollino lends from the Baroque.

He also repeatedly uses elements of Surrealism: When creating settings for female models in his interiors he allows materials that are soft and silky to abut onto hard and severely reflecting surfaces. The manner in which he treats light and shadow, materiality and surfaces, recalls the work of Man Ray. The effects live from artificial light, as corresponding to a night person.

Mollino's appropriation of Alpine building methods and of Baroque and Surrealistic elements is conceptual and remains equidistant from ideologies. He rejects the purely functional, geometrically simple, architecture of some of his contemporaries as sterile and mechanical. "We live unhappy because it is useful and fast", he claims, and searches for beauty in freedom of purpose. The dandyism, which some people attest him, suits to this: He repeatedly designs works for the private and intimate needs of individualists – and not least for himself.

The projects Mollino designs during the Second World War are not realized, but published in "Domus" and "Lo Stile." In 1947 he completes the mountain station and ski hut on Lago Nero located at an altitude of 2,400 meters; the hut was soon left to its own devices and the ravages of time. Structures like the auditorium for Radiotelevisione Italiana and the Lutrario Ballroom in Turin from 1959 have been greatly altered in recent years. In Turin one can still visit the Casa Mollino (1961-1970) – today maintained and run by Fulvio and Napoleone Ferrari – as well as the posthumously inaugurated Teatro Regio with its fan- shaped ceiling (1965-1973).

Mollino's fascination with the beauty of a sweeping, corporal movement is reflected in all his designs. The roof of the Lago Nero hut reaches upwards so dynamically as if it might literally take off. Mollino has recourses to his own experiences when designing these sweeping forms. From 1953, the year of his father's death, onwards he expands his athletic activities: simultaneously an amateur and virtuoso, he practices downhill skiing, air acrobatics and race car driving. Strangely even-tempered, in these disciplines he dares to perform experiments in which everything could go wrong, although nothing ever happens to him. In 1955 he participates in the Le Mans car race with "Bisiluro", a car desgined by himself. The curves of this race car, Mollino's photographs of ski tracks in deep snow (his educational publication "Introduzione al Discesismo" was published in 1950), photographs of female nudes and his aeronautical drawings prove that everything for him is, above all, a question of creating artistic, sweeping lines. One could say that, no matter what Mollino does, he draws: on paper, in the snow, in the sky or along the female body. He draws with both hands, even simultaneously, and hardly needs an intermediate step between the initial sketch and the true to scale construction drawing. His drawings can be regarded as the intellectual point of departure for his designs.

The furniture designed by Mollino is all one of a kind. The pieces do not follow the commodities logics of serially produced furniture. They thus remain alien to both industrial design and handcraft and make sense only as autonomous artworks. Mollino produces a greater number of a piece only if a client commissions this, as it is the case with the armchairs for Casa Minola (1944-1946) and the seating for Lutrario Ballroom (1959-60). For his chairs Mollino combines traditional elements – like those of the Alpine board chair – with bentwood techniques, thereby advancing to the limits of the possible.

Characteristic of the armchairs is the combination of elegant bentwood and corporal upholstery. He constructs desk frames according to aeronautical or natural organic patterns. He assembles glass plates and marble slabs with bent metal tubes. Furniture represents another high point in Mollino's oeuvre. All phases – the Surrealistic, the natural- organic and the modern style with its straighter forms – are represented in the exhibition. On view are designs for Cadma, Casa Orengo, Casa Rivetti, Uffici Lattes, Casa del Sole, Mostra USA, Casa Devalle, the RAI auditorium and Casa Mollino. Three chairs of a private collection, which were believed to be lost, can be seen for the first time.

For years Mollino photographs female nudes in the interiors he designs. Initially acquaintances like Ada Minola and Lina Modell serve as his models. A central feature of these images is the wavy, shining hair, which Mollino arranges with the precision of a high- gloss magazine. He later replaces the Leica with a Polaroid. Dark fantasies about encounters with a stranger move into the foreground: Mollino now asks prostitutes to pose for him. The Polaroids were intended to accompany him in his life after death. From 1961 to 1970 Carlo Mollino built his apartment in the Via Napione where he also shot some of the Polaroids. The apartment was possibly intended to serve as an outer shell for the transition into his next level of existence. Surrounded by the women of the Polaroids and other personal treasures, Mollino wanted to sail away in a boat-shaped bed: "I am preparing, like the Chinese of rank who in life adorns his own mausoleum, a corridor of my house to be a twilight avenue where the photographs and many other mementos of life shall follow in sequence: all beautiful, or almost", he wrote in 1973, the year in which he died of a heart attack. More than two thousand Polaroids were later found in this apartment – today the Casa Mollino, supervised by Fulvio and Napoleone Ferrari.

During his life Mollino never lived in this apartment nor did he ever invite anyone to it. The Casa Mollino thus still possesses the aura of mysterious loneliness. The other interiors also appear to be extremely private settings, created for the eye of a camera, and seem uninterested in being used by permanent residents. The Casa Miller from 1936, for instance, was a two-room apartment with a bathroom, but without a kitchen. Together with other peculiarities – he was a freemason, lifelong bachelor and interested in the occult – this continues to support the psychological interpretation of Mollino as a "holy madman".

In addition to Armin Linke, two other contemporary artists are represented: Simon Starling with a film in which the camera moves close up along the curves of a Mollino chair (Four Thousand Seven Hundred and Twenty Five [Motion Control / Mollino], 2007), and Nairy Baghramian with the installation "Tea Room", which makes reference to Mollino's surrealistic installation Té numero 2, which he created together with his artist friend Italo Cremona in 1935 in Turin.

In cooperation with Wilfried Kuehn, curator and architect, and Armin Linke, curator and artist and with the Museo Casa Mollino, Turin, the Archive of the Central Library for Architecture of the Polytechnic, Turin, and Karlsruhe University of Arts and Design.

The catalogue includes texts by Luca Cerizza, Beatriz Colomina, Fulvio and Napoleone Ferrari, Kurt W. Forster, Wilfried Kuehn and a photographical essay by Armin Linke. Kindly supported by the Schörghuber Corporate Group
With Deutsche Bahn's 'Kultur-Ticket-Spezial' travel to and from the exhibition on one day for only 39 EUR (2nd Class) and 59 EUR (1st Class).