The Contemporary Video Art Fair presents works by 28 artists represented by 28 galleries and non-profit institutions from South America, Asia, the Middle East, Europe and the United States. Presenting 19 single-channel videos and 9 larger-scale video sculptures/installations, Moving Image has been conceived to offer a viewing experience with the excitement and vitality of a fair, while allowing moving-image-based artworks to be appreciated on their own terms. 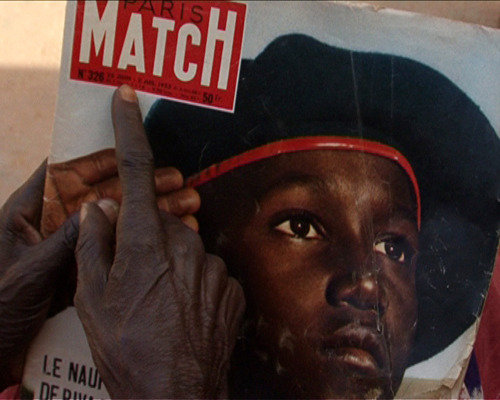 For its inaugural exhibition in London, Moving Image presents works by 28 artists represented by 28 galleries and non-profit institutions from South America, Asia, the Middle East, Europe and the United States. Presenting 19 single-channel videos and 9 larger-scale video sculptures/installations, Moving Image has been conceived to offer a viewing experience with the excitement and vitality of a fair, while allowing moving-image-based artworks to be understood and appreciated on their own terms. Taking place in the Bargehouse, a raw, four-storey warehouse space behind the OXO Wharf Tower, conveniently located within walking distance from both the Tate Modern and the Southbank Centre along the Thames, Moving Image represents a broad survey of artists invited by an international committee of curatorial advisors.

Historical works by renowned artists Dara Birnbaum and Hannah Wilke anchor the exhibition. Birnbaum's Six Movements: Video work from 1975 (presented by Marian Goodman Gallery) explores, as one critic put it, what "men can get away with, and women can't." These black & white works with fixed camera setups are still shocking today. Equally provocative is the 1977 work by Hannah Wilke, Intercourse with....(presented by Ronald Feldman Fine Arts), which documents a haunting performance in which the viewer "'eavesdrops" in on a series of phone messages intended for Wilke, recorded from her answering machine.

Among the single-channel videos in the fair is Vincent Meesen's highly acclaimed 2009 film, Vita Nova (presented by Brussels non-profit space Normal). Taking as its starting point Roland Barthes' famous 1957 essay Mythologies and the Paris Match cover photo that illustrated his critique of Modern thoughts on history, Meesen's film reveals how each new telling of a famous story breathes new life and meaning into it. The Kiss (2007) by Eve Sussman and Rufus Corporation (presented by Impronte Contemporary Art) isolates a light moment between two people in a room as if captured on a surveillance camera, their truncated bodies drifting in and out of the shot, punctuated with sounds of laughter and the ambience of a party. Jonathan Ehrenberg's 2010 video Seed (presented by Nicelle Beauchene Gallery) addresses themes of transformation and metamorphosis. Evocative of Nikolai Gogol's The Nose (an absurdist tale in which a man's nose becomes detached from his face and begins to boss around its former owner), Ehernberg's piece explores feelings of disembodiment and loss of self. And Shadi Habib Allah's 26-minute video The King and the Jester (presented by Dubai's Green Art Gallery) was shot over two weeks at a Miami autobody shop, capturing the characters of this hypermasculine world as they drift between moments banal and impassioned, revealing a riviting infrastructure of class identification and hierarchies of authority.

In Oliver Michael's multimedia work The Lover's (2010), video is projected onto a bronze bust of Abraham Lincoln, animating the sculpture, as he utters a perpetual procession of descriptive, often spurious statements. The weight and tone of the imposing black bust and its subject are hijacked by Michaels in a critique of the formal fetishization of historical objects. In their 2010 installation Mastering Bambi, Persijn Broersen & Margit Lukács (presented by Amsterdam's Akinci Gallery) strip the Disney classic of its cute, personified characters, guiding the viewer through the moods of the film via the "untrammelled wilderness, full of deceptive realism and harmony in which man is the only enemy." And in their five-channel video installation A New Silk Road: Algorithm of Survival and Hope (first commissioned by the Art Institute of Chicago and presented by Winkleman Gallery), Kyrgyz artists Gulnara Kasmalieva and Muratbek Djumaliev weave a mesmerizing, contemporary look at the inspiring resilience of poverty-stricken residents along one of history's most famous passages.

BYOB is a series of one-night-exhibitions hosting artists, their work and their projectors. As part of Moving Image, the event will include a series of artists that will collaborate on site to create a moving image performance. Each artist will choose the work to be exhibited and bring his or her own projection apparatus. This edition of BYOB will happen in the Bargehouse attic.

Artists:
• Greta Alfaro
• Richard Install
• Olga Koroleva
• Lucy Fry
• Claudia Tomaz
• Franck Trebillac
• and more to be confirmed soon
This will be the third edition of BYOB in London. The first happened in February with more than 30 artists exhibiting their work at the Woodmill and the second BYOB happened at the Roundhouse in August.

Moving Image was conceived by Edward Winkleman and Murat Orozobekov of New York's Winkleman Gallery. For more information, contact Ed Winkleman at +212.643.3152 or +1.917.517.0761 or email us at contact@moving-image.info