The solo show "Speak To Me, Walk With Me" surveys over two decades of Heng's prolific career, presenting a body of works that spans photography, installation, performance and public art. 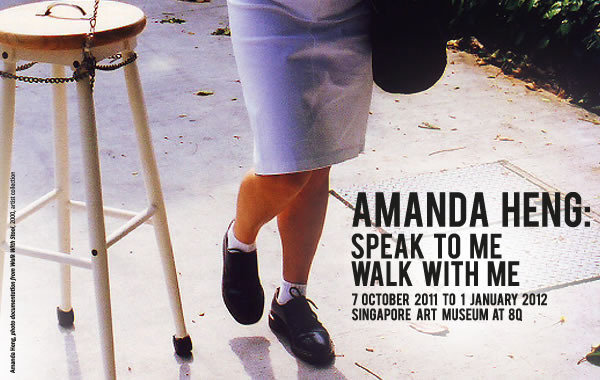 The Singapore Art Museum (SAM) is proud to present Amanda Heng: Speak To Me, Walk With Me, the first solo exhibition that charts the extensive practice of one of Singapore’s most established contemporary artists. The exhibition surveys over two decades of her prolific career, presenting a body of works that spans photography, installation, performance and public art.

Amanda Heng received the Cultural Medallion in 2010. This award is Singapore’s highest national accolade conferred to artists for their achievements and contributions. Heng is best known for adopting an interdisciplinary approach in exploring themes of self-representation, community identity and historical memory. The exhibition features more than 50 works from Heng’s illustrious oeuvre, including those from the SAM collection, two new commissions, and rare documentation of her earlier performances. Spread across five galleries at SAM’s annex building at 8Q, Heng raises questions on themes like Gender and Identity; Community and the Art of Participation; Historical Memory and Performance and The Body—fundamental components that constitute the core of her practice.

Some of her defining works that will be presented include Another Woman, Let’s Walk and Worthy Tour Co (S) Pte Ltd. Heng also looks at the use of the body as a medium for contemporary art through In Memory of June 4 and Washing Exercise.

For this exhibition, SAM commissioned Singirl Revisits and Singirl in Lorong Buangkok. Both works are a continuation from the artist’s Singirl series which began in 2000 and pay tribute to fast vanishing sites which bear cultural symbolism to the identity of Singapore.

Mr. Tan Boon Hui, Director of SAM, says, “Contemporary art is regarded by many to have first emerged in Singapore in the 1980s. Though there were many innovators at work then, The Artists Village and Fifth Passage, and the ground-breaking Trimurti exhibition, served to bring contemporary art to public view and challenged previous traditions that defined art as a thing of beauty to be contemplated at aesthetically. The main contribution of contemporary artists in Singapore was to insist that art be relevant to daily life and engage with the complex issues of society, politics, economics and culture of a rapidly modernising Singapore. Many of Singapore’s important contemporary artists have since amassed a compelling and important body of work, inspired by the very environment we live in.

Amanda Heng’s works since the late 1980s have been rallying calls for art to not just be beautiful but also relevant to issues of our times. Her practice sign-posts important crossroads and significant milestones in the development of contemporary art here, touching on topics that are sure to move visitors.”

A publication that provides commentary on Heng’s diverse practice, with essays contributed by respected curators, scholars and art commentators, has been produced. The artist and SAM curator Michelle Ho will also be leading tours of the exhibition for visitors.