For his show "Brei" Manfred Pernice presents a collection of recent work centred on the monumental 2010 architectural installation 'Tutti'. "It's a Poor Sort of Memory that Only Works Backwards" explores Johan Grimonprez' s practice as it dances on the borders between art and cinema, documentary and fiction, practice and theory. The third exhibition is a collection presentation. 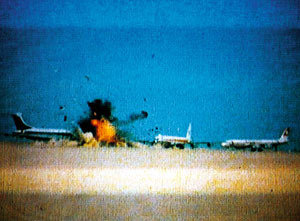 Johan Grimonprez
It's a Poor Sort of Memory that Only Works Backwards: On Zapping, Close encounters and the Commercial Break

Other versions of this exhibition have previously been shown at the Pinakothek der Moderne in Munich, in 2007, and at The Fruitmarket Gallery in Edinburgh and the Blaffer Museum in Houston in 2010. The book It’s a Poor Sort of Memory that Only Works Backwards is being published to accompany this exhibition.
Thanks to the backing of:
the Fruitmarket Gallery, Edinburgh; The Blaffer Art Museum, Houston; Artist Rooms, Tate; National Galleries of Scotland; Cultuurcentrum Strombeek; KASK, Gent; Gallerie Kamel Mennour, Paris; Sean Kelly Gallery, New York; ZAPOMATIK, Brussel