Alchemy of the Everyday is the first major retrospective on the universal thinker and artist, showing the influence of Steiner's thought in many areas of our lives today. Steiner inspired artists such as Piet Mondrian, Wassily Kandinsky and Joseph Beuys. He was one of the founders of 'organic architecture' and also developed a unique stylistic idiom in the area of furniture design. 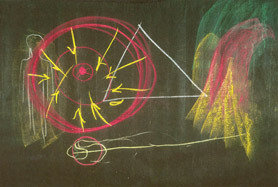 Rudolf Steiner is regarded as one of the most influential – and also one of the most controversial – reformers of the twentieth century. He founded the Waldorf schools and advocated a holistic view of humanity which shows its influence in many areas of our lives today – including bio-cosmetics, a heightened environmental consciousness and biodynamic agricultural products, to name a few examples. Steiner inspired artists such as Piet Mondrian, Wassily Kandinsky and Joseph Beuys. He was one of the founders of “organic architecture” and also developed a unique stylistic idiom in the area of furniture design. The Vitra Design Museum exhibition “Rudolf Steiner – Alchemy of the Everyday” is the first major retrospective on this universal thinker and artist.

Steiner’s most important work of architecture is the Goetheanum (1924-1928) in Dornach, Switzerland. This building alone ranks as an architectural milestone, since it marks the first use of concrete to construct a sculpturally formed edifice of such imposing size. Steiner’s so-called Anthroposophy, which propounds the close interrelationship of humanity, nature and cosmos in connection with a spiritual world whose existence is naturally assumed, has spread from Dornach around the globe. Steiner communicated his thoughts in over 5000 lectures and numerous books, which are now published in the Complete Works (Gesamtausgabe), comprising over 300 volumes. Several hundred Waldorf schools, numerous medical clinics, therapeutic facilities, banking institutions and hundreds of farms in many parts of the world bear witness to the wide dissemination and establishment of Steiner’s ideas.

The exhibition approaches Steiner’s multifaceted oeuvre from the perspective of the time period in which it was created. Within this initial context, it becomes evident that Steiner’s artistic work was influenced by Art Nouveau as well as Cubism and Expressionism, and that many of his thoughts were also propagated by other advocates of the Lebensreform movement around 1900. The second section of the exhibition demonstrates how Steiner distilled a completely new everyday aesthetic from this social and cultural environment. Based on many years of work as a Goethe scholar, he developed the principle of metamorphosis in architect-ture and design, applied further ideas from Goethe to his own colour theory, and originated the new artistic dance form of eurythmics. In a third and final section, the exhibition shows how Steiner implemented his thoughts on reform in concrete aspects of daily life, striving for a connection between art and life, which Joseph Beuys later referred to as “social sculpture”.

In its view of the work and influence of Steiner, the exhibition also takes note of the criticism he has received – whether in connection with Waldorf pedagogy or the belief in a “spiritual world”. Above all, however, the exhibition allows Steiner’s works to speak for themselves, thereby enabling visitors to form their own opinions with the help of relevant background information. For this purpose, the Vitra Design Museum has assembled an unprecedented collection of artefacts, including 45 pieces of furniture, 46 models, 18 sculptures, over 100 original drawings and plans, as well as dozens of additional documents ranging from posters to letters written to Steiner by Franz Kafka, Piet Mondrian, Richard Neutra and Else Lasker-Schüler.

The reciprocal influence of Steiner’s work and the era in which he lived is further illustrated by rare documents including early Expressionist films, excerpts from Wochenschau newsreels, and artworks by Wassily Kandinsky, Lyonel Feininger, Antoni Gaudí, Erich Mendelsohn and Frank Lloyd Wright. Among the highlights of the exhibition are a monumental model of the Goetheanum and two polygonal colour chambers designed by Steiner in 1913, which were reconstructed as walk-in models especially for this exhibition.

Taken as a whole, the objects in the exhibition trace the image of a person whose worldview and aesthetics tend to have a polarising effect, yet whose importance in the context of cultural history is undisputed. Even some of the current trends in design and architecture seem to have been anticipated by Steiner – such as the inspiration derived from growth processes and organic forms, which is experiencing a renaissance today. And particularly in times of heated debate on topics such as ecological responsibility, the search for religious meaning and an economic system that has gone awry, a holistic worldview like that of Steiner is gaining renewed attention.

Curator
Mateo Kries, curator of the exhibition, studied art history and sociology. He has worked at the Vitra Design Museum since 1995, where he served as director of its Berlin branch from 2000 to 2006. He has curated exhibitions for the Vitra Design Museum on a wide range of topics including Mies van der Rohe, Issey Miyake, domestic Arab culture, Joe Columbo and Le Corbusier. Kries is one of the founders of the Designmai Festival, has taught design theory as a lecturer and guest professor and has authored numerous essays and publications on design history and theory. Currently, he is chief curator and programme director of the Vitra Design Museum.
Rudolf Steiner – Alchemy of the Everyday

An exhibition of the Vitra Design Museum in cooperation with Kunstmuseum Wolfsburg and Kunstmuseum Stuttgart.

Catalogue
The exhibition will be accompanied by a 338-page catalogue containing numerous essays, an extensive catalogue of works and an illustrated biography. Among the authors are art and architectural historians such as Mateo Kries, Walter Kugler, Julia Althaus, Philip Urspung, Wolfgang Pehnt, Andreas Ruby, Markus Brüderlin