Heel Gezellig. The objects and works presented at the Eerste Jacob van Campenstraat deal with notions of mortality, or the material of being. The exhibition on the Keizersgracht is inspired by Andrew Guenther's first New York solo show in which he invited guest stars to exhibit work within his own exhibition. The works were point, and counterpoint to his own, thus creating a sort of devotional element. The artist has invited Larry Bamburg, Sarah E. Wood, Erin Shirreff, Jonathan Marshall, Gretchen Bennett, Andrew Guenther, Adam Helms and Kris Kollmer. 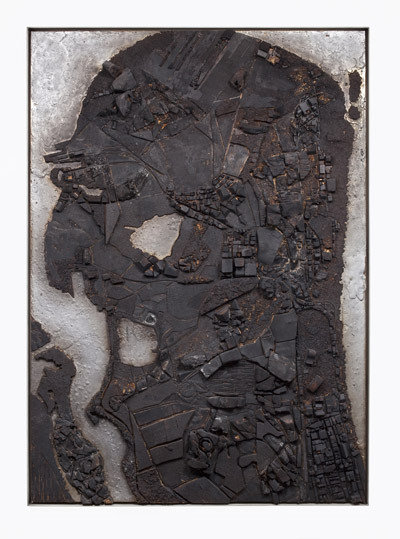 GRIMM is pleased to announce the second exhibition by Matthew Day Jackson in Amsterdam. A double bill, the exhibition(s) will feature new work in all media over both spaces. At the Eerste Jacob van Campenstraat Matthew Day Jackson will present ‘Heel Gezellig’. This part of the exhibition thematically will lie at the intersection of the interior and exterior of our natural environment. Like a Bird’s nest, or a Bear’s den, our homes are an expression of our ability to fashion what is “outside”, reordered to become “inside”. The objects and works presented deal with notions of mortality, or the material of being. Many of the works refer directly to the artist’s body, and through photography and sculpture the human form is re- imaged and re-formed. On view will be a large Study Collection work, paintings and various sculptures. The gallery itself has been transformed into a living room environment.

The exhibition on the Keizersgracht is inspired by Andrew Guenther's first New York solo show in which he invited guest stars to exhibit work within his own exhibition. The works were point, and counterpoint to his own, thus creating a sort of devotional element. This idea is mirrored in Jackson's "Heel Gezellig" exhibition at the Keizersgracht. The artist has invited Larry Bamburg, Sarah E. Wood, Erin Shirreff, Jonathan Marshall, Gretchen Bennett, Andrew Guenther, Adam Helms and Kris Kollmer.

At the center of the exhibition a new "In search of.." video work will be presented: "In search of.. Zombie’s". The 30-minute video functions as the show’s narrative thread and is based upon the late 1970s television series "In Search of.." hosted by Leonard Nimoy. Matthew Day Jackson's series consists of three videos and the "In search of..Zombies" video is the final work in the series:

The first video looks at how man conceives life as viewed from outer space and examines the literal and metaphoric aspects of artistic journeys and investigates the rise and fall of civilizations and how the past is communicated through objects. Within this narrative, this first episode tracks the artist’s mysterious (and fictional) disappearance.

The second video, ’In Search of...Ghosts’, discusses the formalisms of haunting, fear and how the specter of history makes itself known in the present. The film is a continuation from the first episode, which tackled the subject of anthropomorphism as the primary lens that we use to understand nearly everything around us. ‘In Search of...Ghosts’ was shot on the site of the Apple II House, a model home used for the early nuclear tests in Nevada.

The new ‘In search of.. Zombie’s” video deals with an investigation into a culture of fear, defined by the boundaries of the familiar. The body and its internal workings have become suspect, perhaps even dangerous, when reason is replaced by desire. We no longer need, we simply want. In suppressing the unfamiliar and the mystery of our being, we kill the very essence of what it is to be human. We kill our dreams, and kill our ability to understand ourselves, by dismembering our capacity to empathize with another... with the other. This becomes a sort of death—a lived death in which we lumber, erect... fervid but vacant... numb. The origin of the idea behind 'zombies' is mirrored in the very real fear of nuclear disaster that loomed over society during the cold war.  All three videos have an underlying theme that is an investigation into the rise of the nuclear and technological era and the resulting change to our society as a whole.