For the front space of W139 Ivan creates a narration in five chapters including already existing as well as new works under the non-title %. As usual the artists subverts reality by appropriating the constituent conditions and matter. 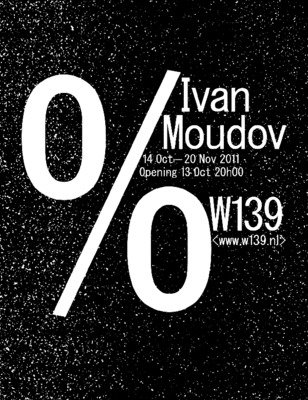 Oversaturated it is, the Dutch art scene, elitist, with enormous financial expenses, only interesting for very few people, self-righteous and coined by sparse entrepreneurial spirit. W139 together with Ivan Moudov simulate the case of emergency as a possible answer.

Ivan Moudov (Sofia, Bulgaria, 1975), subverts reality by appropriating the constituent conditions and matter. He does it with such rigorous conceptual consequence that his works start to have a life of their own which can assert themselves far beyond the addressed reality.

So for instance for his work „Fragments' (box #1-4), created between 2003 and 2007, he stole, while traveling all over the place, small parts of art installations, although only the ones that didn't jeopardize the allover appearance of the installation. He placed them in a suitcase covered in red leather, reminding of Marcel Duchamps' boxes „boíte-en-valise'. He presented the suitcase at the 52nd Biennale in Venice in the Bulgarian Pavilion.

For the front space of W139 Ivan creates a narration in five chapters including already existing as well as new works under the non-title „%'. They present themselves in a reduced manner, need closer observation, are only experienceable through our own participation and, finally, long for a lot of wind. Regarding the background of the Bulgarian situation and in relation to the Dutch cuts and their argumentation the exhibition seems like an enormous black market of its own amusing rules. In this sense: It can always be cheaper!

Also on display in the backspace of W139 until 20 November:
Magicgruppe Kulturobjekt

Considering the name Magicgruppe Kulturobjekt, we can assume that it is about an inarticulate agreement of a couple of people in order to produce something, which can be looked at as something collective later on. But in fact, it is not about an artist group, it is about a working concept intended to serve the effective continuation of studio situation into exhibition space.

At first, the architecture of the space is tested and its conditions are sorted out insofar as the new structure provides a safe place for the things to come. The invited artists, some already know each other, some meet the first time, work in the space under this dynamic working concept by gathering objects and raw materials, mostly basic construction material to some extent worked and in expansive spatial arrangements installed. What ultimately materializes as a visual outcome of Magicgruppe Kulturobjekt, is a social fabric – the organic result of negotiation between idea, space, material and players.