The starting point of this project is a reflection on museums as an institution and the underlying structures within which knowledge is generated and transmitted. It has been devised on the basis of a specific context: that of the town of Celje, its history, its cultural production, its museum structures and its here and now. There are three different situations or strategies, each corresponding to a clearly differentiated space within the town: Likovni Salon; Plevnik-Kronkowska Gallery and the Regional Museum. 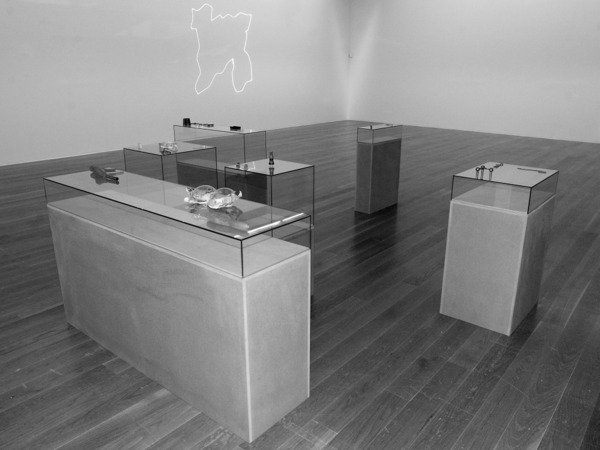 The starting point of this project, to which we have given the generic title Narratives in progress, is a reflection on museums as an institution and the underlying structures within which knowledge is generated and transmitted. In a single phrase we include the producers of knowledge, the structures that museums put into operation to ensure its transmission, and, it goes without saying, the recipients within this system of production, namely the audiences. Far from considering its goal to be an alleged infallibility regarding its contents and strategies (which would be like continuing to defend the autonomy of a work of art against the ever-increasing value attached to a variety of subjectivities), museum are undoubtedly immersed in a process of ‘fragility’, which goes much further than a momentary crisis in the social, political or economic sphere. As invariably happens in these arenas, the alternative would appear to lie in reinventing a new system alert not only to changes in the overall field of thought and ideas, but also to how these can be developed and individualised in a given context. Each museum, it would seem, must therefore be placed within the coordinates of its origins, history and development, within the geographical framework and the uniquely distinguishing situations in which it functions, within its constraints and the real possibilities open to it.

Another of the reflections that lie at the heart of this project concerns the notion of history and the way in which it can be interpreted, re-read or extended from the world of art. From this perspective, the artistic practice of a good number of creative artists today is moving towards a space for research that surpasses conventional historiographical standpoints, bringing other disciplines into play, with the aim of producing works of art (whether they be artefacts or events) that will finally be open to the multiple subjectivities from which it is possible to understand the past and act in the present.

In relation to this, and returning to museums, these are now able to play a decisive role through the various instruments at their disposal. How and in what formats and through what strategies are they to make the narratives produced by artists available to the public? The answer may have something to do with the construction of an inclusive space in which audiences are endowed with a voice equal to that coming from the artistic production or the very institution itself.

The Narratives in progress project has been devised on the basis of a specific context: that of the town of Celje, its history, its cultural production, its museum structures and its here and now. We should therefore understand the city and its various situations and perspectives as a specific framework for action rather than as a theme. We are also interested in highlighting the specificity of this project within a series of broad coordinates that go beyond the circumstances we have just referred to above in generic fashion. Applying the historiographical method of microhistory pioneered by Carlo Ginzburg to our situation, one of the missions of this project is to detect fresh and revealing clues in those events and dynamics that at first sight might appear to be merely random or insignificant.

In order to put this project into practice we have established three different situations or strategies, each corresponding to a clearly differentiated space within the town. For the first of these, we have chosen Likovni Salon as the context in which to represent the idea of a museum, and from whence to programme a variety of actions with a view to generating pressing questions about the future of the museum as institution, whilst at the same time establishing new modes of sociability.

Secondly, the Plevnik-Kronkowska Gallery has been selected as a place in which to reflect on exhibition practice itself. Here, the works of art arranged in space are not intended to establish a hierarchical or predetermined route, and even less so one in which the work of the curator occupies a dominant position. Quite to the contrary, the spectator is required to actively establish his or her own discourse, or putting it another way, to construct his or her own narrative from the individual works and the possible connections between them.
History appears as the leitmotiv for most of the artists present here, some of whom propose new ways of talking about the past through the use of strategies that are closely linked to other disciplines of knowledge.

Audiences themselves will play a particularly significant role in the third of the project’s venues, the Regional Museum. Under the umbrella of a pre-established programme that is nevertheless open to different ways of developing and different timings, each artist will establish his or her own dynamic with regard to the audiences that, whether as part of a programmed visit or as the result of a spur of the moment decision, come to the museum. This will thus be a succession of actions or interferences in the context of a fine arts museum, to all intents and purposes far removed from any kind of practice not governed by strictly defined criteria.
Juan de Nieves

Friday, 14th of October OPENING, at 19.45h
- Nika Span, Play Misty for Me (permanent piece during the time of the exhibition)
- Jasa, Drawing a Line Through the Clouds of Myth

Tuesday, 18th of October. From 10h to 18h
- Jasa, Drawing a Line Through the Clouds of Myth

Wednesday, 19th of October. From 10h to 18h
- Jasa, Drawing a Line Through the Clouds of Myth

Thursday, 20th of October. From 10h to 18h
- Jasa, Drawing a Line Through the Clouds of Myth
- at 19h Lecture of psychiatrist Dr. Gorazd Vojteh Mrevlje on Jasa's profile