For the V edition of "Chambre a Part" this exhibition is based on a reflection on figurative and abstract art, through a dialogue between Asian, and particularly Chinese, and Western contemporary art scenes. 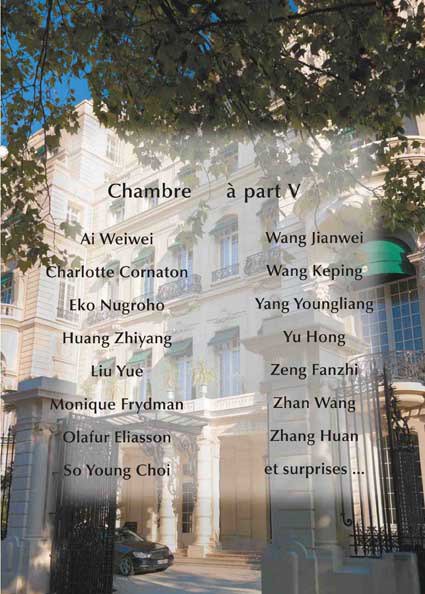 For the fifth edition of « Chambre à Part », which is part of the VIP program of Parisian contemporary art fair FIAC, Laurence Dreyfus, art advisor and curator, and Alain Borgers, director of the Shangri-La Hotel in Paris, present, from 18th to 23rd October 2011, « Lines and Figures : Conversations ». Exhibition on appointment only.

This exhibition is based on a reflection on figurative and abstract art, through a dialogue between Asian, and particularly Chinese, and Western contemporary art scenes.

Leading artists will be represented, such as Zao Wou Ki, essential artist of the exhibition, with a work on paper where abstract and calligraphy mix, Yan Pei Ming, whose Conversations Chairs illustrate that dialogue between lines and figures.

A significant painting from french artist, Monique Frydman, will participate to that exchange by addressing questions of traces and imprints.
Laurence Dreyfus will also have the pleasure of showing an ash painting produced for the exhibition specially, by the reknown artist Zhang Huan.
In comparison, Wang Keping's plain wood sculptures, with round and generous shapes, will echo the metallic and shinny sculptures of Zhan Wang.

Emerging values of the contemporary art market will also be represented, such as young artist Yang Yongliang, whose photographs of astonishing urban views float behind the mist of traditional chinese painting.
The visitor will discover the work of Yu Hong, a female artist living in Beijing, who will be showed at Ullens at the end of the year, through two paintings depicting characters in a gold background as well as Huang Zhiyang, whose paintings are characterized by dynamic lines and colours that sways between calligraphy and landscape.
Indonesian artist Eko Nugroho, in residency at Sandra and Amaury Mulliez in Paris (SAM Art Projects) proposes two broderies, a medium representative of his œuvre.

Video art will be represented by artist Wang Jianwei and photography by the elegant and refined work of Liu Yue, who is also currently displayed at the 2011 edition of the Photoquai Biennale.
An artwork from Olafur Eliasson will stress the playful relationship of light and lines, while participating to the broad diversity of mediums showed.

Loyal to her ambition to contribute to the breakthrough of young promising artists, Laurence Dreyfus will present emerging artists such as So Young Choi, who creates urban landscape made of recycled Denim cloth, or Charlotte Cornaton, whose video work, commissioned for the exhibition, retraces her impression of a recent trip in China.

The exhibition specifies and confirms the dynamic of the contemporary Chinese art scene in this dialogue with European creative practice. After a first wave of Pop influence, the second generation of artist is indeed, less politically demanding and shows more aesthetical and conceptual concerns.