Haraldur Jonsson will show photographs from the series 'galaxy' and the sculptures 'blackholes for home', two for adults and one for a child. 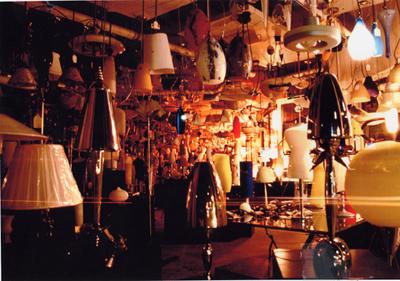 On Thursday, January 23rd, at 5 p.m. an exhibition with new works by Haraldur JÃ³nsson will open at i8 gallery.

Haraldur Jonsson will show photographs from the series 'galaxy' and the sculptures 'blackholes for home', two for adults and one for a child.

Haraldur Jonsson's "Galaxy" greets the viewer with a dense star cluster of lamps, huddled together to give and receive warmth, a temporary community of designed commodities not yet sold, arbtrarily joined by function. Despite the clamor of incommensurable "styles" of lamp, upon closer examination a touching kind of family resemblance emerges, the lamps quietly arguing amongst themselves, as families do. While the switched on appliances exchange opinions about design principles, their darkened cousins dream of the offices, homes, and apartments they may someday inhabit. Someday, but not tonight, not in the still, electric night that Jonsson observes. Seen under plexiglass and separated from the viewer by a kind of virtual storefront, the possibility of ownership is deferred and held at bay. Some of the photographs in the group push this gambit further by including the reflective storefront glass, metal panes splitting the image in half, and locking the viewer out. Prodded via email about his lamp photographs, Jonsson confirms this tactic, and expands it: "I wanted to document them as light chapels, baroque temples of vanity but also as the temporally lost paradises of the closed light shop." When viewed en masse these lamps threaten to drown the viewer in a tide of non-differentiation that is far from cozy, a paratactic plenitude of all styles ( . . . and . . . and . . . and . . . ) whose open-endedness leaks outwards and grows fuzzy as it recedes into the darkness at the back of these shops. Sidestepping the branded rationalism of Ikea or the aura of exclusivity proper to a dealer in antiques, Jonsson's light shop teems with gloriously incompatible merchandise, and this dissonance is what makes the photographs so richly dense, and more than a little ridiculous: plastic wrapped lamp shades squatting above faux-Grecian urns recline next to sleekly phallic Art Nouveau trifles, basking under the glowing jellyfish of crystal chandeliers, beside would-be rustic columnar braziers, while amoeboid modernist art glass seems to swim beneath a dense foliage of electrified rococo candles. Jonsson's reference to the baroque is telling: this overripe cornucopia of immaculate electrical commodities mirrors (ie. doubles and reverses) the shattered, fragmentary eloquence of Piranesi and Salvator Rosa's penchant for artfully disintegrating classical bric-a-brac. If they pined for a lost golden age and registered their own historical absence from it by limning its decay, Jonsson locates such emotions squarely within a marketplace in which consumer choice promises the possibility of a customized regulation of the particulars of one's designed environment, but remains haunted by the impossible superabundance of that marketplace as a totality. Choosing one lamp is no substitute for choosing ALL the lamps in the shop, and yet it is what we as consumers resign ourselves to, lest we succumb to the storefront's interminable seductions. If, as Kierkegaard tells us, "the moment of decision is the moment of madness", Haraldur Jonsson's "Galaxy" series suspends us at the the brink of such a madness, hovering in the moment of flickering consumer indecision, basking in the imagined community of objects.
Drew Daniels

Opening hours: Thursdays and Fridays from 11 am to 6 pm, Saturdays from 1 pm - 5 pm and by appointment.