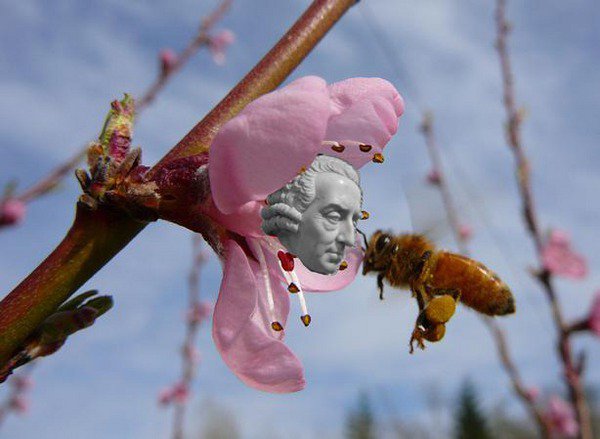 If you leave me I'm not coming, his solo exhibition, features several new commissions, each of which enters into a surprising relationship with our building. Outsized windscreen wipers will contend with a constant downpour of 'rain' over our large street facing window—the latest in a line of aberrant fountains Weber has become known for. A copy of J K Huysmans' 'Against Nature' (1886) will be bleached onto a ream of black paper through printed sheets of glass by a vertical beam of light made by a heliostat mounted on the roof. A kinetic mannequin will simulate the appearance of a man running off the parapet of our building in the manner of a cartoon character who hasn't yet realised it has run off the edge of a cliff.

Weber's work is often concerned with uncanny crossovers between what is manmade and the natural world. The abstract paintings in the exhibition are made by bees defecating onto canvases on their 'cleansing flights' out of the hive. A domestic vacuum cleaner makes a pintsized tornado. The popular reception of Darwin's theory of evolution is told from the perspective of the ape in a museum of small contemporaneous sculptures. Discredited scientific ideas or metaphysical convictions are resuscitated for their imaginative values. Our epistemological certainties are made to erode, and our controlled urban and institutional systems appear on the brink of chaos.

For Already there! Weber has assembled disparate objects spanning disciplines, cultures and epochs from the Ashmoleon museum, Science Museum, Tate and other collecting institutions. His dense, two-gallery display will resemble an unruly museum curated according to obscure but revealing interpretative schema. Odd formal coincidences between otherwise quite different objects will give rise to surprising 'third meanings.' Anatomical wax dolls in Regency clothing will rub up against defunct psychological testing instruments, a march of outdoor Modernist sculptures, the aquatic choreography of sea horses, Rabies warning signs, dozens of elaborate clay pipes, and an empty birdcage from a lunatic asylum. It is not so much the objects themselves that are bizarre, but their suggestive orchestration in a single space. Where is the 'there' that Weber will breathlessly transport us to? Already there! is both a weirdly diagonal route through our imploded collective archive and a tour via other objects of the intellectual backstage of the artist's own practice.

The exhibition will be accompanied by a catalogue with essays by Diedrich Diedrichson and Joerg Heiser co-published by Koenig and a free programme of talks on tritones, bees, bad science, fountain history, Darwinian pop culture, the Berlin squatter scene of the 90s, the free university movement, chimpanzee cinema, and what it means to have a body. There will be evenings of films by Jean Painlevé, Maya Deren and Kenneth Anger.