The basic assumption ofâ€œre:viewâ€is that in video, film and multimedia there are several overlapping (sub-) types, and distinct boundaries no longer exist. The area in which film assumes some of the features of installations and art videos have cinematic qualities is therefore being promoted in a special competition. 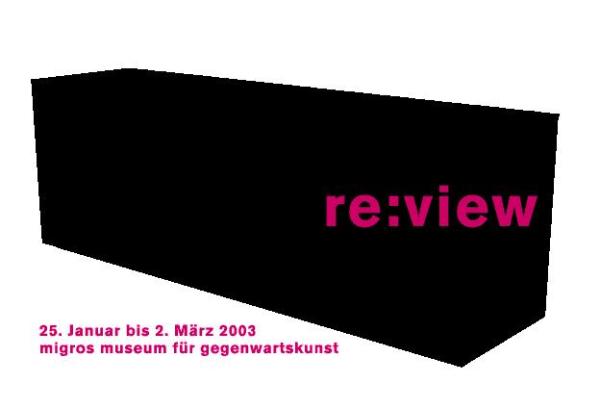 
At a time when film projections are venturing into the Museum and artistic video installations are becoming cinematic, there is a demand for new ways of looking at things. The basic assumption of â€œre:viewâ€ is that in video, film and multimedia there are several overlapping (sub-) types, and distinct boundaries no longer exist.The area in which film assumes some of the features of installations and art videos have cinematic qualities is therefore being promoted in a special competition.The aim of â€œre:viewâ€ is to support innovative working methods and forms of presentation.

An external jury for 2001, comprising the artist Muda Mathis, the cineaste Yves Yersin, Mario Casanova, head of the Centro dâ€™Arte Contemporanea, Bellinzona, came together for a two-day meeting. The jury was supported by the programme designer and art director Frank Hyde-Antwi.

The now completed winning projects are:

Helbling/Marusic â€“ balkanTV
â€œbalkanTVâ€ is the fictitious and mobile television station of Andreas Helbling (1967) and Zeljka Marusic (1967). On their travels in the former Yugoslavia and Switzerland, they use their video camera to collect their own pictures. When they arrive somewhere, they build a simple house out of battens and plastic film, balkanTVâ€™s mobile studio. This house is the setting for discussion, eating and drinking coffee; it becomes a place for meetings and exchanges. At the same time, the mobile studio also serves as an exhibition room for their own or other artistsâ€™ works. With balkanTV they are creating a platform for other reports from the Balkans and Switzerland. In their work they concern themselves with the area of conflict between images from the media and the impressions of their own subjective and private experiences.

Keller/Wittwer â€“ Ruhe im Schatten
Dagmar Keller (1972) and Martin Wittwer (1969), who both studied at the Kunstakademie in DÃ¼sseldorf, have been working together as a team since 1997. The basis for their work â€œRuhe im Schattenâ€ [â€œSilent Shadowsâ€] are the court records of an unsolved murder that took place in Switzerland in 1955. But the video work makes no attempt either to reconstruct the sequence of events or to provide a possible solution of the case. Instead, it raises the question of how an event can be removed from reality and embedded in our consciousness in a fictionalised form.

Peter Volkart â€“ Terra Incognita
The filmmaker and designer Peter Volkart (1957) explains his project as a homage to the writer Raymond Roussel. A film about the fabrication of memory. A story about an expedition and a mysterious bequest. For â€œre:viewâ€, the project will be compacted by a further level, in the form of a three-dimensional staging, and with the addition of artefacts and found items.

Ingrid Wildi â€“ Les choses Ã©tranges
The film project from Ingrid Wildi, born in Santiago de Chile in 1963, tells the story of the search for her mother, Eliane Merino Ibanez, a parapsychologist, who lives alone in the Chilean town of Arica, close to the Atacama Desert, and who disappeared several years ago. The viewer joins the artist in the search for clues, the return to her homeland, a meeting with her mother, grandmother and uncle by means of tales told by third persons. The film also offers an insight into the history, politics and everyday life of Chile.

Tom Menzi / Marc Meyer â€“ Auf Gegenseitigkeit
In their video installation â€œAuf Gegenseitigkeitâ€ [â€œItâ€™s mutualâ€] the artist Tom Menzi (1963) and the architect and designer Marc Meyer (1962) show social manners and a specific type of communication by a global player based on the ZÃ¼richsee. Here dangers are transformed into risks and the world depicted in terms of events. It may seem strange, if it becomes apparent what this communication is all about.

Elodie Pong â€“ Secrets for sale and 0900-secret
Over several weeks in December 2001, Elodie Pong, artist, anthropologist and sociologist, bought a secret from each of the visitors to her installation ADN/ARN, by recording the process of selling and narrating on video camera. The narrator could, if he or she so wished, make him/herself invisible. The artist has condensed the collected video material into a 64-minute film. At the same time a telephone box will be installed which will enable visitors to listen in to even more secrets.

A selection of the winning projects is due to be shown as part of the International Film Festival â€Visions du RÃ©elâ€ in April 2003 in Nyon.