Probables. The first solo exhibition of the South-African artist in the Netherlands features photography, film-animations, drawings, sculptures and performance. The playing man is the protagonist in many of Rhode's works. Using techniques of street art and some formal aspects of constructivism the artist creates dreamlike urban landscapes and lets the viewer himself sense the probability of catching a dream. 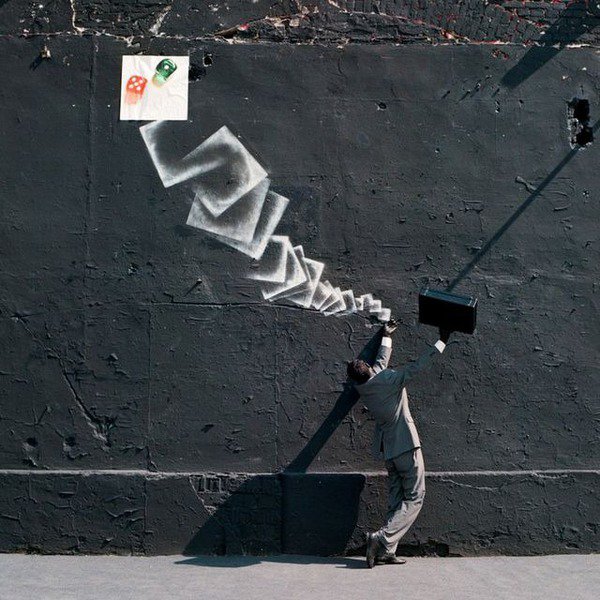 Galerie Fons Welters is proud to announce the first solo exhibition of the South-African artist Robin Rhode in the Netherlands. Combining the rich variety of media such as photography, film-animations, drawings, sculptures and performance the artist has created diverse art works, which in a subtle manner all refer to the subject of what he calls probabilities in human life.

What is this notion of probabilities? Rhode’s Probables have many faces. The sculpture of a white chalk bike, shown in the exhibition, symbolizes a dream object from the artist’s youth. At school in Johannesburg, where Rhode got his early education, the young pupils were forced by their senior pupils, as a kind of initiation rite, to interact with an object drawn on the bathroom walls with chalk stolen from the classroom. Riding on a drawn imaginary bicycle was thus part of the early daily life of Rhode’s; owning a bike was a common desire that for some of the pupils seemed a real probability. In this current show the dream materializes into a real object. An object that manifests itself furthermore as an extension of the artist’s body, not just a vehicle to ride but a vehicle in which to construct his probable body double. Interestingly enough, the white bicycle has for a long time carried a special meaning in Amsterdam. Right there in the 60’s the first plan for free white bicycles was launched as part of an anarchistic movement in which the idea of homo ludens, the playing man, came into force.

The playing man is the protagonist in many of Rhode’s works. Using techniques of street art and some formal aspects of constructivism the artist creates dreamlike urban landscapes and lets the viewer himself sense the probability of catching a dream. In 36 Ways a Dice can Roll the protagonist, dressed in a business suit and compulsively holding a briefcase in his right hand, is throwing two dice against the dark outside wall. A constellation of playfully drawn geometrical shadows of the green and red dice forms a background for the 36 sequences in which the viewer can capture a dance of joy, a celebration of hope, a fear of losing, a juggle with fate –life as a game full of chances. In this work, like in all Rhode’s works made for this exhibition, the absurdity is not absurd but represents simply universal human desires and longing for new realities.

Robin Rhode (Cape Town, 1976) studied at the South African School of Film, Television and Dramatic Arts, Johannesburg in 2000, as well as Fine Art at the Technikon Witwatersrand. He has been included in several notable group exhibitions such as How Latitudes Become Forms, Walker Art Centre, MN (2003), New Photography, MoMA, NY (2005), The Experience of Art, Italian Pavilion, 51st Venice Biennale, Venice, IT (2005) and Prospect.1 New Orleans, The New Orleans Biennial, LA (2008). His solo exhibitions were held in the Haus der Kunst, Munich, Germany (2007), Hayward Gallery (2008), Castello di Rivoli (2011), Together with the pianist L.O. Andsnes he realised the piano concert project Pictures Reframed (2009) inspired by the composer Modest Mussorsgky’s piano suite. The artist won the AT Kearney Award this year.