Behind That Person. For over thirty years, Mullican has been exploring the themes of cosmology, consciousness, and materiality through performance, video, drawing, sculpture, archives, among other media. That person, an alter-ego that emerges when the artist undergoes hypnosis, has become a driving force behind Mullican's output, tapping into an alternative consciousness where the lines between reality and fiction become obfuscated. 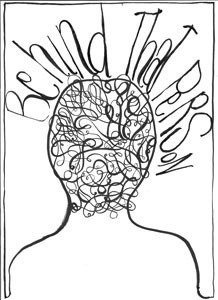 Tracy Williams, Ltd. is pleased to present Matt Mullican’s third solo show with the gallery, Behind That Person. This exhibition comprises new work using recent performances at Haus der Kunst as well as the Tate Modern as an entry point to further examine performative action and subjective experience.

For over thirty years, Matt Mullican has been exploring the themes of cosmology, consciousness, and materiality through performance, video, drawing, sculpture, archives, among other media. that person, an alter-ego that emerges when Mullican undergoes hypnosis, has become a driving force behind Mullican’s output, tapping into an alternative consciousness where the lines between reality and fiction become obfuscated.
Bulletin boards, a familiar presence in Mullican’s oeuvre, stand as hinged pairs, filled with transcriptions of the monologue of that person from a recent session of hypnosis. A low wall partitioning the space into color-coded areas transforms the space into a chamber of the schematized universe of that person— his corporeal existence affirmed by an abraded copy of The Financial Times, the remainder of a performance in July 2011 at Haus der Kunst where Mullican, under hypnosis, rubbed the pink paper so vigorously against his skin that the boundaries between flesh, paper, and ink commingled.

Mullican’s predilection for archives and references is evident in oilstick rubbings of lyrical, decorative script, after the plates of Encyclopédie, a 18th Century general encyclopedia edited by Denis Diderot. Across from this grouping hangs an ink-wash painting made during a performance at the Tate Modern in 2007 and recent rubbings made based on the performance. The installation is completed with a sound element of audio clips collected by Mullican.

The south gallery features projections of footage from a selection of Mullican’s performances, where common tropes, such as the minutiae of daily routine, are punctuated by diatribes about compulsion, sex, authenticity, and expression.

Matt Mullican was born in Santa Monica, California and currently lives and works in Berlin. He received his B.F.A. from the California Institute of the Arts in 1974. His latest retrospective, Organizing the World, just concluded at Haus der Kunst, Munich. He has been part of solo and group exhibitions, most recently at The Drawing Center, New York, The Metropolitan Museum of Art, New York, S.T.U.K. Kunstencentrum, Leuven, Pompidou-Metz, Lorraine, Hedah Maastricht, de Appel, Amsterdam, and Museum of Contemporary Art, Los Angeles. In 2012, Rizzoli will publish a monograph on Mullican’s work from 2000 to the present.