'The Private Collection of Robert Rauschenberg' selections from Rauschenberg's personal art collection and an exhibition of recent paintings by Howard Hodgkin. In Hodgkin's paintings, abstraction and figuration are held in perfect tension. 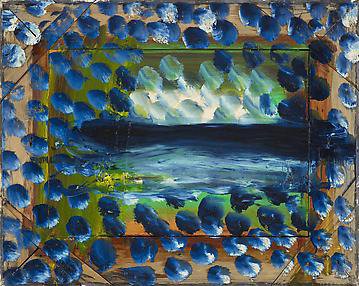 The Private Collection of Robert Rauschenberg

Proceeds from the collection help fund the endowment established for the Foundation’s
philanthropic activities. An artist’s collection is a rare resource, charged with anecdotes of how and why and where works were acquired, as well as whether they represented epistemic interests, or they were used for reference in the creation of new works. This fascinating exhibition provides special insight into Rauschenberg’s broader inspirations as well as his friendships and affinities, the causes he supported, and his personal philanthropic initiatives.

A game-changing figure in post-war American art, Rauschenberg bridged all traditional
boundaries between medium and genre and forever changed the relationship between artist, image, and viewer. He quickly identified as his driving energies and motivations the incidental, the immediate, and the perception of a presence greater than his own artistic virtuosity. Rauschenberg truly believed in the communicative and transformative potential of art and throughout his life he devoted his creative energies equally to artistic and philanthropic activities.

In 1970 he founded Change, Inc. to assist artists financially in emergency situations, and in the 1980s he inaugurated ROCI (Rauschenberg Overseas Culture Interchange), a pattern-breaking, collaborative, global exhibition project that forged entirely new artistic territory in international dialogue and peace-keeping. In 1990 he formed the Robert Rauschenberg Foundation to benefit and promote awareness of the causes and groups close to his heart. Activities included educational art programs, environmental and humanitarian campaigns, as well as grants and direct assistance to artistic collaborations. Since Rauschenberg’s death in 2008, the Foundation is responsible for maintaining this legacy as well as the expansion of philanthropic activities consistent with his personal view that “Art can change the world.”

Some of these artworks—such as Duchamp’s Bottlerack (1960), Cage’s original scores, Marden’s Choice (1967), and Ruscha’s Romeo, With Contraceptive Ghost (1980), represent milestones in recent contemporary art history; others, such as Warhol’s Portrait of Robert Rauschenberg(1967), John Chamberlain’s jewel-like sculpture Homer (1960) and Trisha Brown’s vigorous notations are of a different order, intimate and highly personal, though no less potent. Whether masterpiece or token in the general order of things, Rauschenberg ascribed equal importance to all and this exhibition of the art with which he surrounded himself seeks to reflect the breadth, openness and sincerity of his vision.

A catalogue of selected works from the collection is currently being prepared by Gagosian Gallery and the Robert Rauschenberg Foundation.

I don't think you can lightly paint a picture. It's an activity I take very seriously.
Howard Hodgkin

Gagosian Gallery is pleased to present an exhibition of recent paintings by Howard Hodgkin. In Hodgkin’s paintings, abstraction and figuration are held in perfect tension. Assertive compressed gestures, sweeping complex textures, a lush palette, and the dynamic interchange of light and dark are all hallmarks of his distinctive signature. Embracing spontaneity and directness in equal measure to the processes of reflection and capitulation, it may take a year of preparation to execute a single and instantaneous brushstroke. Containing maximalist gestures and saturated colors expressed in the effects of the brush, the more intimately scaled paintings appear jewellike, while larger works are sumptuous and theatrical. With their incorporated frames and painted wooden supports, they operate as both objects and images.

In each painting, Hodgkin’s subject is a presence that is sensed rather than apprehended, remaining resistant to interpretation, allusive, and fragmentary. Vibrant traces of experience inspired by everyday memories, places, and encounters are called by name in titles such as Breakfast (2010-11), In Egypt (2007-08), Opera (2003-11) and Knightsbridge (2009-11). By intimating the world beyond the confines of the frame, he creates works that are at once composed and autonomous wholes and synecdoches of the greater aesthetic reality that lies beyond their limits.

Howard Hodgkin was born in London in 1932 and attended Camberwell School of Art and the Bath Academy of Art, Corsham. His work is included in major public and private collections all over the world. Major museum exhibitions include “Paintings 1975-1995,” organized by the Modern Art Museum of Fort Worth, Texas (1995, opened at the Metropolitan Museum of Art, New York, traveled the Modern Art Museum of Fort Worth, Kunstverein of the Rhineland and Westphalia, Düsseldorf, and the Tate Modern, London in 1996); a major retrospective at the Irish Museum of Modern Art, Dublin (2006, traveled to Tate Britain and Museo Nacional Centro de Arte Reina Sofia, Madrid); “Paintings: 1992-2007,” Yale Center for British Art, New Haven (2007, traveled to the Fitzwilliam Museum, Cambridge). Most recently, “Time and Place, 2001-2010,”
opened at Modern Art Oxford in 2010, and traveled to De Pont Museum of Contemporary Art, Tilburg, The Netherlands, and to San Diego Museum of Art in 2010-11.