Hot earl green sausage tea barbie (first flush). The exhibition includes a large-scale installation in which photographs, posters, painted panels, bronze sculptures, paintings and wooden structures, act as a contemplation of himself as artist, a personal exploration of his assumed role. 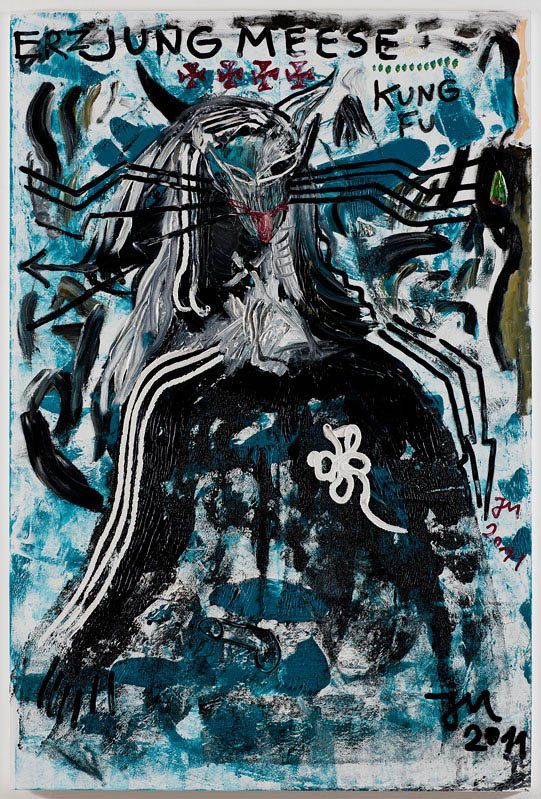 We are proud to present Jonathan Meese's third exhibition at the gallery, conceived as a continuation of his current Total Self-Portrait show at GEM (Museum voor Actuele Kunst) in The Hague, Netherlands. The exhibition includes a large-scale installation in the main space, in which photographs, posters, painted panels, bronze sculptures, paintings and wooden structures, act as a contemplation of himself as artist, a personal exploration of his assumed role. Since Meese's days as a student, performance and installation have been a pivotal part of his art, both formally and in content, always related to theater and film. His installations have been platforms for his ideas about the autonomy of art, which he expresses in the ubiquitous term "Dictatorship of Art."

As remarked in the catalogue of his exhibition at GEM: "At first glance, Meese's art has a raw, unscrupulous feel. It has the air of an exorcism, an artist responding to the violence and perversion of the modern world. On closer inspection, however, one discovers humor and a childlike approach. Meese's likeness appears in almost all his work. At first he would have himself photographed or depict himself in his role as artist, in his studio, along with paint and brushes. But Meese gradually began to assume roles: the prophet 'Meesiah', a dictator, a soldier, Dr. No, Humpty Dumpty. Increasingly unrecognizable and wearing masks, Meese became an uninhibited collector of characters." His new self-portrait paintings presented in our second gallery embody this freedom of role-playing and his inherent expressive flamboyance.

Jonathan Meese was born in Tokyo in 1970. He currently lives and works in Berlin. In the last three years Meese has held solo exhibitions at the GEM (Museum voor Actuele Kunst) in The Hague, Netherlands; Center of Contemporary Art Bukovje, Postojna, Slovenia; Staatsschauspiel in Dresden; North Miami Museum of Contemporary Art; Centro de Arte Contemporáneo in Málaga, Spain; the Arp Museum, Remagen and Vittoriale degli Italiani in Gardone, Italy. Recently he designed the stage for "Dionysos" at Gasometer/State Opera in Amsterdam, and inaugurated a permanent sculpture at Alte Nationalgalerie in Berlin.