'Adrian Piper. Since 1965'. The first major retrospective of Adrian Piper's important oeuvre in France, in fact, the largest ever to be shown in Europe. 'Valerie Jouve Â­ Resonances'. Valerie Jouve belongs to a new generation of young artists in France who have bid farewell to their country's great tradition of humanistic, reportorial photography while retaining its still useable essential elements. 'Collection 001'. This show casts light on works by artists who, in the 1970s, transgressed the limits of the classical aesthetic field with the introduction of physical presence and the gestures of performance, and others who carried out systematic samplings of socio-economic spaces with a view to analysing the systems that structure society. 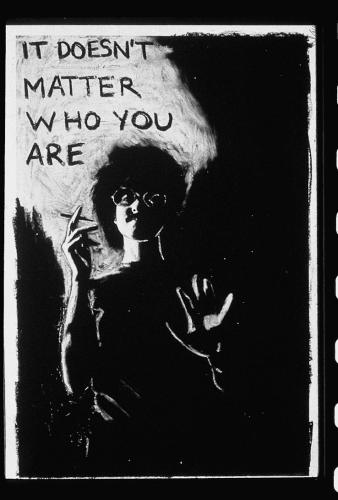 This exhibition is the first major retrospective of Adrian Piper's important oeuvre in France, in fact, the largest ever to be shown in Europe Â­ first in Austria at the Generali Foundation in Vienna, and then at the Institut d'art contemporain in Villeurbanne. A broad spectrum of her works will be displayed, ranging from paintings and early conceptual works of the sixties and her performances of the seventies to recent works. Amongst those, which will be shown for the first time in Europe, are a large number of conceptual pieces as well as a series of audio works, which Adrian Piper created in the sixties.
Even as a relatively young artist, Adrian Piper, born in 1948 in Harlem/New York, USA, already had an impressive career as a conceptual artist. The majority of her early conceptual pieces are works on paper, using text, numbers, drawings, and/or photographs where an examination of the aspects of time and space takes place. In reaction to various political events, Adrian Piper started to analyze her social position as an artist, a woman, and an African-American. The medium of conceptual art was no longer suited to her concerns and she aimed above all to introduce her art unobtrusively into non-art contexts. In the seventies Adrian Piper began to conceive as well as realize performances.

Since the eighties, Adrian Piper has been known for her interrogations of themes such as racism, xenophobia, and the nature of the self. Her works-photo/text collages, drawings, performances and (video) installations-are conceived as an act of political communication. The artist wants to provoke viewers into reacting directly to their own often deeply rooted impulses and answers regarding these topics. Rather then employing an elitist 'art-jargon,' she strives to create a situation, which allows the viewers to react directly. Piper refers to this concept as the 'indexical present.' Amongst those, also very popular works, are the so-called Funk Lessons (1982-84), where Piper invited the participants to collectively listen to and dance to funk music and in doing so to simultaneously reflect upon racist stereotypes of African-Americans. Her latest group of works, the Color Wheel-Series (2000), starts with large tableaux to exercise self-awareness. which will also be on show at this years documenta 11 in Kassel. In this series Adrian Piper uses the Pantone-Color Wheel as a matrix to establish skin tones.
Exhibition organized by the Generali Foundation, Vienna (Austria).
Curator: Sabine Breitwieser

- Lecture by Adrian Piper. Wednesday 19 February 2003 at 7:00 pm. In english, with simultaneous translation.

- Lecture on the work of Adrian Piper by Elvan Zabunyan. 19 March 2003 at 7.00 pm.
Elvan Zabunyan teaches art history at the University of Rennes 2.

ValÃ©rie Jouve (born in 1964) belongs to a new generation of young artists in France who have bid farewell to their country's great tradition of humanistic, reportorial photography while retaining its still useable essential elements ; i.e., she photographs landscapes, and above all cityscapes and ultra-dense urban situations, in a documentary manner.
At the same time Â­ and this often means in the same picture Â­ she takes photographs of people in the middle of a movement, an act, a backward glance, a laugh, an appearance. Landscapes and portraits, two classical themes in painting and photography, here brought together in one picture in such a way that they constitute a choreographic scenario in and before the backdrop of documented urban space. The collision between the staged and portrayed elements, between the metropolitan urban framework and the expressions, gestures and actions of the individual opens up a fictitious space that tastes of reality ; its theme is the relationship, allusion and resonance between space and time, between man and his surroundings.

- Screening of her new film 'Grand Littoral' by Valerie Jouve at the cinema thÃ©atre Le Zola, Villeurbanne on wednesday 2 April.

- Lecture by Dean Inkster on the work of Valerie Jouve on 17 April at 7.00 pm.
Dean Inkster is a writer and teacher at the art school in Valence.

- Collection 001
The Institut d'art contemporain will be putting on regular shows of selected works from the FRAC RhÃ´ne-Alpes collection which it normally exhibits in towns around the region. The intention is that these shows should stimulate new readings of the works, and renew the kinds of experience that are generated by them. The perspective is twofold: on the one hand, that of generating crossovers between the different works and, on the other hand, that of reinforcing and clarifying the ideas behind the other exhibitions presented at the same time through historical, formal, thematic and critical references, and artistic attitudes.
This 001 show casts light on works by artists who, in the 1970s, transgressed the limits of the classical aesthetic field with the introduction of physical presence and the gestures of performance, and others who carried out systematic samplings of socio-economic spaces with a view to analysing the systems that structure society. This initial selection is made up of works by AndrÃ© Cadere, Rebecca Horn, Helen Levitt, Annette Messager, Orlan, Gina Pane, Lygia Pape and. Stephen Willats