The show presents four artistic positions that shift attention to the art market under varying premises: Maria Eichhorn and Daniel Buren are joined by Diego Castro and Katja Staats, the two 2011 winners of the Daniel Frese Prize for Contemporary Art. 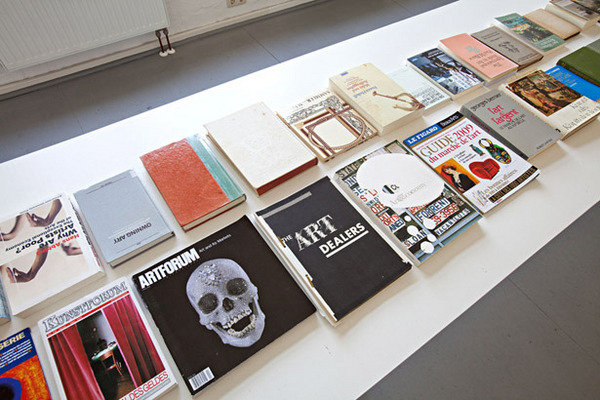 Besides Reproduction
Phase 3 of the exhibition series "Demanding Supplies"

Following a long critical tradition, the art market has been understood as art’s contaminating "other". More recently, there have been increasing attempts to subject the dichotomy between art and economy to a more differentiated analysis: the art market appears as a highly ritualized, segmented system marked by complex social processes. Whereas it resembles other markets in some respects, its unique characteristics include intransparency, as well as distinctive value regimes and hidden symbolic commodification processes in the interplay of a variety of actants. There is a widespread awareness of these conditions in the artistic field, and many artists are still critically investigating the intricacies of that very market—without falling into euphoria or phobia. In the thicket of an accelerated art market that is perceived as diffuse, explicit positioning seems decisive for reflecting on one’s own involvement.

In 2011, the Kunstraum of Leuphana University of Lüneburg, Germany, has devoted three exhibition projects entitled "Demanding Supplies – Nachfragende Angebote" to this exploration of art and its markets. In the first phase, "Enabling Space," nOffice (Markus Miessen, Ralf Pflugfelder, Magnus Nilsson) developed a new spatial structure and thereby questioned how the conditions of art’s presentation predetermine its ambivalent relationship to its markets.

The second phase, "Trans-Actions," developed in collaboration with Halle für Kunst Lüneburg and Magnus Schäfer, was a double exhibition focusing on a phenomenon of the most recent history of art. Taking the example of the New York gallery "American Fine Arts, Co."—founded by Colin de Land (1955–2003)—the exhibition looked at the merging of commercial and artistic practices generally considered at odds with each other. Exhibition participants included Art Club 2000, Patterson Beckwith, J. St. Bernard, Stephan Dillemuth, John Dogg, Loretta Fahrenholz, Karl Holmqvist, Jackie McAllister, James Meyer, and Phillip Zach. Besides these reflexions on the mechanisms of art markets, artist Carissa Rodriguez highlighted the problem of professional positioning in the art world in her installation "Secrétaires". The works of three of these artists are kept for the current exhibition.

The third phase, "Besides Reproduction," will now present four artistic positions that shift attention to the art market under varying premises: Maria Eichhorn and Daniel Buren are joined by Diego Castro and Katja Staats, the two 2011 winners of the Daniel Frese Prize for Contemporary Art, which was awarded for the first time this year.

Maria Eichhorn has been examining the artistic field since the 1990s. A famous example of her work is "Maria Eichhorn Aktiengesellschaft" (Public Limited Company) (2002) for documenta 11. Consisting of a stock company using its allotted production funds, the work leads its system ad absurdum by freezing its own assets. For the show at the Kunstraum of Leuphana University of Lüneburg, the artist revisits an exhibition series she presented four times at her gallery Barbara Weiss, Berlin, between 1995 and 2001. The exhibitions staged a kind of "remnant sale" that operated according to the principle of successive reduction. Every object sold was missing from the inventory of the following exhibition. For each of the exhibitions, an updated invitation card listing all of the works in alphabetical order gives insight into the dynamics of supply and demand. Ten years after, Eichhorn updates this invitation card once again. It is presented next to the four previous cards in a new display conceived by the artist. In this way, Eichhorn develops a partial continuation – a simultaneous reproduction and retrospection.

With his 2005 work "Immaterialistische Internationale" (Immaterialist International), Diego Castro has created a progressively expanding movement of performances, videos, installations, pamphlets and hundreds of drawings, all of which have come to form a complex of works that critically targets the standard forms of distribution and representation systems in art. Castro’s design, which emerged from this body of work, was awarded the 2011 Daniel Frese Prize for Contemporary Art by a jury chaired by Beatrice von Bismarck and acknowledged by laudator Robert Fleck. "Immaterialist International" discusses the ritualistic value of art and advocates ways of bypassing the various filters of the field. Castro employs the means of reproduction by updating them while holding back the original as discussed by Walter Benjamin. For the exhibition, Castro develops an overview of his project which opens up references to the "Situationist International," its impulses critical of capitalism, and its political demands in the 1960s. A copy machine allows the viewers to access posters, audio recordings and drawings on subjects such as "art and art trade" or "working conditions for cultural workers".

The intransparency of the art market and the social mechanisms of the art world are also a central field of interest for artist Katja Staats, winner of the 2011 Daniel Frese Prize for Contemporary Art in the young emerging artist category. For the exhibition, she visited artists in her geographical context to represent several of their works in different sites. Each of the black-and-white images depicts Katja Staats as a rear figure, gazing at the artwork seen in the photograph. Further allusions in this composition include the "picture in the picture" as well as the artist's self-depiction. The reproduction of persons in the picture allows to incorporate the players of the art market network. What is multiplied are the perspectives of a system whose protagonists are following specific conventions and pursuing interests often veiled. In this way, Staats questions not only her own position; by recontextualizing those artworks, she forces a shift in the attention economy through a symbolic inversion of center and periphery.

Daniel Buren looks at the partial homology of artworks and other passion objects. In 2008, the first-generation Conceptual artist and early proponent of institutional critique triggered a daring liaison between the art and fashion markets. Buren designed 365 silk scarves for the luxury brand "Hermès," the same kind that serves as the company’s hallmark. The motifs Buren employs are drawn from a selection from his bundle of thousands of "photo-souvenirs". Buren has been taking these photographs of his own ephemeral and site-specific art projects since the 1950s, though until that point they had only been seen in books. Besides the "photo-souvenirs," the scarves were also printed with another "brand" by Buren himself: the always 8.7 cm-wide stripes that he had originally taken from a customary awning fabric and has been using ever since. As part of the "photo-souvenirs" on the silks, the stripe pattern now occupies a new territory in the inherent logic of the work. As surfaces of various spatial and social situations, Buren generates his critical intersections of art, design, craft, and fashion. In an arrangement developed for the Kunstraum, the artist seizes on this threefold reproduction: the ephemeral art project through the "photo-souvenir," the "photo-souvenirs" in the silk cloth and the awning fabric pattern as well as the artistic identification symbols as a framework for both that is nonetheless set to work – questioning the margin between artwork and luxury good. This also leaves room for Buren's own inquiry into the sphere of the logic of distinction and the constantly re-evaluated edge of criticism—that, however, continually defines the difference between works of art and luxury objects.

The exhibition "Demanding Supplies" is based on a cooperation of the Kunstraum of the Leuphana University of Lüneburg with the project KIM. This project is part of the Innovation-Incubator Lüneburg, which is an EU major project, financed by the European Regional Development Fund and co-funded by the federal state of Lower Saxony.