For 'Falling Off a Cliff' the gallery presents a sound piece by Muller, that explores the dissolution and shaping of identity through language, two 'Sonas' from 1973 and an installation / documentation of Horwitz's early performances. 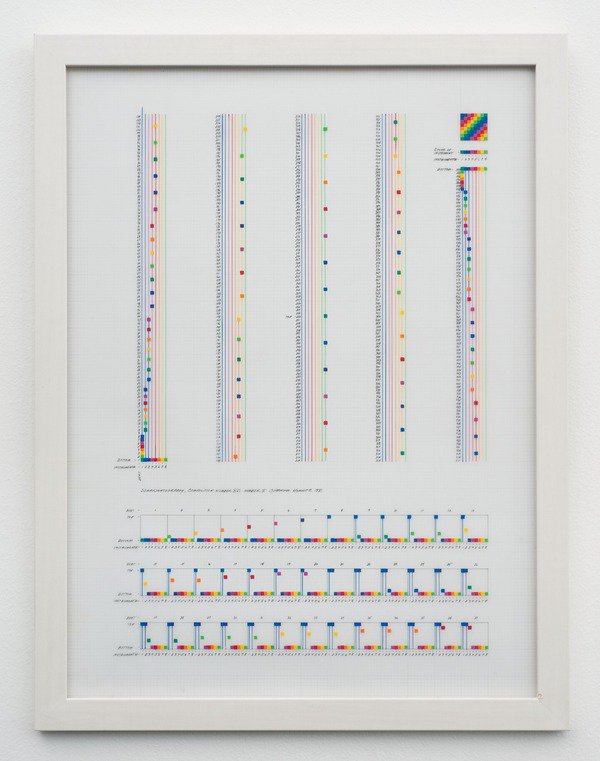 This exhibition was born out of a symbiotic relationship that the two artists have developed since their initial meeting in 2007.

Michael Müller was born in Germany in 1970 of Indian descent, and has over the past 15 years developed a compelling body of work, which explores the origins and boundaries of language, and the cultural identities (or the lack-of) shaped around it. Best known for his drawings and written work, the artist has been expending his means of expression to incorporate sculptures, installation, and most recently sound work.

In his most recent body of work, Müller has rooted out the origin of language, and archived linguistic systems from the dawn of civilization up until most recent days. Each system is paired with a portrait of its alleged creator, when found. Drawn from this extensive research project, which occupied the artist’s past 3 years, the sound piece presented in the gallery immerses the visitors to the gallery with the sound of the Id Opera, which was composed by Thom Willems and performed by Kate Strong. In this work Ocean Boy: Id Opera, Michael Müller explores the dissolution and shaping of identity through language.

Channa Horwitz has created a visual philosophy by working with deductive logic drawn from a need to control and compose time through her drawings and painting work. To do this, she uses graphs as the basis for this description of time; one inch, equals one beat or pulse in time.
From this, the artist has created over the past 50 years, a unique language of compositions that depict rhythm visually. The cornerstone for this quest lies in her series of works titled “Sonakinetography”, which starts as a drawing that can then be expressed through performances, musical compositions and installations, created by the artist herself, or with collaborators, who then become interpreters of her creations.
What looks like a rigid geometric grid structure, with assigned numbers, and linear logic becomes a fertile ground for sound, rhythm, and dance, an open-source code language that allows perpetual changes and re-arrangements. Horwitz keeps extending her system infinitely like a beat that never stops, the mind game by the artist never ceases, and invites viewers and collaborators to join the game.

The gallery will present two “Sonas” from 1973, and an installation / documentation of her early performances. Channa Horwitz was born and raised in Los Angeles, recent exhibitions include a solo at Aanant & Zoo, Berlin, and FRIEZE Frame in London.

She will be having an upcoming retrospective exhibition at the Kunsthalle Dresden in the fall of 2012. Michael Müller, born in Ingelheim in 1970, now lives and works in Berlin. He currently has a solo exhibition at Thomas Schulte in Berlin, and has shown in various group shows in Germany and elsewhere: most recently at the Land art Biennial held in Ulan Bator, Mongolia, as well as at shows at Kunstsaele in Berlin, Kunstmuseum Kloster Unser Lieben Frauen, Magdeburg, and in the exhibition Dopplereffekt: Bilder in Kunst und Wissenschaft at Kunsthalle zu Kiel.