A Centennial Celebration. The exhibition focuses on the later years of the artist's life, featuring 14 paintings, with the largest measuring 13 by 27 feet and many of which have never before been on public view outside Europe. Pushing beyond the Surrealists' typical Freudian-inspired work, Matta sought to create an art that was not purely introspective, but that instead spoke to a broader social context. 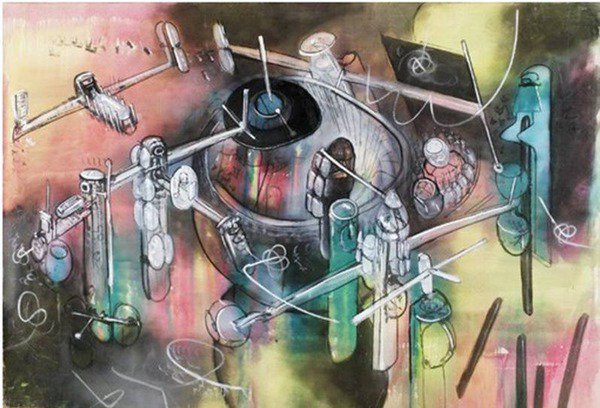 On the occasion of the one-hundredth anniversary of Matta’s birth, The Pace Gallery is honored to present Matta: A Centennial Celebration, on view at 534 West 25th Street from November 7, 2011 through January 28, 2012. An opening reception will be held at the gallery on Tuesday, November 8th from 6–8 pm. The exhibition focuses on the later years of the artist’s life, featuring 14 paintings, with the largest measuring 13 by 27 feet and many of which have never before been on public view outside Europe. The show follows Matta 1911–2011, a major museum show at the Institut Valencià d’Art Modern and Museo de Bellas Artes de Bilbao and precedes Centenario Matta: 11.11.11 at the Centro Cultural Palacio La Moneda in Santiago, Chile (November 11, 2011–February 26, 2012), celebrating the special occasion on both sides of the Atlantic. The exhibition has been organized in close collaboration with the artist’s children Pablo Echaurren, Federica Matta and Ramuntcho Matta.

A catalogue with an essay by writer Justin Spring will accompany the exhibition. In 2010 Spring was a finalist for the 2010 National Book Award and his work was featured as a New York Times Notable Book of the Year, a Top 10 Biography of the Year on Amazon, an ARTFORUM Top 10 pick, and a Top 10 Book of the Year in the San Francisco Chronicle. Spring also recently received the American Library Association Stonewall Honor and the Lambda Literary Award in Biography and was a runner up for the PEN America Center/Weld Prize for Distinguished biography.

Chilean-born Matta is considered one of the great Surrealists and is widely acclaimed for his critical—and catalytic—influence on the development of Abstract Expressionism and on his contemporaries, including Jackson Pollock, Arshile Gorky, Mark Rothko and Robert Motherwell. “This year, the centenary year of Matta’s birth, cultural historians are finally coming to a fuller understanding of this restless international genius, and in so doing, starting to situate his life and work not only in the context of European art history, but also within the increasingly linked cultural histories of Latin America, the United States, Italy, Spain, and France,” Spring writes. An introduction to Salvador Dalí via Federico García Lorca led to Matta’s invitation from André Breton to join the Paris-based Surrealist circle as its youngest member in 1937. Matta participated in the Paris Exposicion International du Surrealism in 1938 and, with the the onset of World War II, moved to New York the following year, where he quickly established a strong presence in the New York art world. After nearly a decade in the United States, Matta returned to Europe in 1948. The artist resided in Rome until 1955 and lived the rest of his life in Paris, London, and Tarquinia (an ancient Etruscan city north of Rome). Throughout his life, Matta traveled widely and synthesized the influences of the many profound thinkers, artists and revolutionaries, as well as the diverse cultures that he encountered, into his work. As Matta’s daughter Federica explains, “He created his thinking in the waves of the different languages mixing…[and] his thought was built in the moment of his speaking. He was doing the same in painting…He was letting the languages and the forms carry him.”

In 1957 the Museum of Modern Art, New York recognized Matta’s significance in shaping the trajectory of modern art with a major retrospective devoted to his works until that date. Although the artist exhibited widely throughout Europe, Asia and Latin America during the second half of the twentieth century, the works produced in the later years of his life remain largely unseen in the United States. Matta: A Centennial Celebration provides an opportunity to examine these later masterpieces and re-establishes Matta’s rightful position as a seminal figure in the canon of modern art. The exhibition follows The Pace Gallery’s presentation of five decades of the artist’s work in 2009, which focused more heavily on the earlier years of his career.

“The function of art,” Matta once said, “is to unveil the enormous economic, cultural, and emotional forces that materially interact in our lives and that constitute the real space in which we live.” Pushing beyond the Surrealists’ typical Freudian-inspired work, Matta sought to create an art that was not purely introspective, but that instead spoke to a broader social context. From his earlier landscapes of the tumultuous Chilean geography to his portrayal of the horrific realities of World War II, the racial violence in the United States in the 1960s and the war in Vietnam, Matta’s energized canvases reflect a profound awareness of the world and a unique ability to portray the realities of our shared social history.

The Centre Georges Pompidou, Musée National d’art Moderne, Paris, mounted a major retrospective of Matta’s work in 1985 and in 1999 the Museo Nacional Centro de Arte Reina Sofía, Madrid presented Matta, which later traveled to the Fundació Caixa de Catalunya, Barcelona. More recently, in 2002, exhibitions of Matta’s work were presented at the Museum of Contemporary Art, Los Angeles (which traveled to the Miami Art Museum and the Museum of Contemporary Art, Chicago) as well as at the Musée d’Art Moderne et Contemporain, Geneva.

In 2009, the Los Angeles County Museum of Art announced the acquisition of Matta’s Burn, Baby, Burn (1965–66), a monumental mural that covers more than 320 square feet. The painting is installed on the fourth floor of the museum’s building for Art of the Americas.