The exhibition Out of town draws together a selection of works and documentation from Monastyrski's spatiotemporal practice as an artist, poet, theoretician, and member of the still-active group Collective Actions. 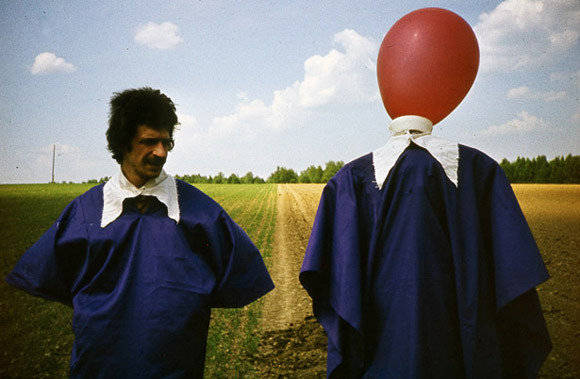 e-flux is pleased to present "Out of Town: Andrei Monastyrski and Collective Actions," curated by Boris Groys. In conjunction with Performa 11, the opening on November 5 will inaugurate e-flux's new space on Manhattan's Lower East Side.

As the first comprehensive presentation in the US of this central figure in 1970s Moscow Conceptualism, the exhibition draws together a selection of works and documentation from Andrei Monastyrski's spatiotemporal practice as an artist, poet, theoretician, and member of the still-active group Collective Actions. Documentation of the continuing project Trips Out of Town, created and performed with Collective Actions are presented along with a selection of the artists photographic series Earth Works (1987) and Monastyrski's more recent performances Podjachev's Youtube channel (2010–2011).

Founded by Monastyrski in 1976 and still active today, Collective Actions is comprised of artists Nikita Alekseev, Elena Elagina, Georgy Kizevalter, Igor Makarevich, Andrei Monastyrski, Nikolai Panitkov, Sergei Romashko, and Sabine Hänsgen. CA have since undertaken over 125 planned performances together with many of Russia's leading avant-garde theoreticians, thinkers, and artists. These are compiled in an ongoing series of books entitled Trips Out of Town, of which 10 volumes exist so far, with an 11th in progress.

The aesthetic events that make up CA's "actions" have been developed both in vast rural spaces (fields, forests, rivers and so on) and in the texts that introduce the actions, accompany them, and comment on the events of an action. However, some actions have also been held in the city and in closed spaces when the process of developing a contemporary aesthetic language has called for it.

These performances were key in the development of Monastyrski's Earth Works, a series of black and white photographs of Moscow's high-rise buildings, underpasses and sanitary system constructions. This collection of works, together with a selection of Monastyrski's recent performances from Podjachev's Youtube channel (2010–2011) exemplify the artist's commitment to a practice in which art and life are bound, and which evades the fetishization of the art objects and the artist alike.

Please join us on Saturday, November 5 in New York for the opening of the exhibition and the new e-flux space at 311 East Broadway, 2nd Floor, 7pm. On Thursday, November 10, 6pm Boris Groys will present on the work of Andrei Monastyrski and Collective Actions, in conjunction with the launch of e-flux journal issue 29: Revisiting Conceptual Art, guest-edited by Groys.

This collaboration takes as its starting point the exhibition "Empty Zones," curated by Groys for the Russian Pavilion at the 54th Venice Biennale, 2011.