Yvon, El tuerto and Pretty Eyes. "Pretty Eyes refuses to unload her husband whose bad rep is attracting the evil eye onto the town. I don't know why, but I start scouring Tijuana for this couple". 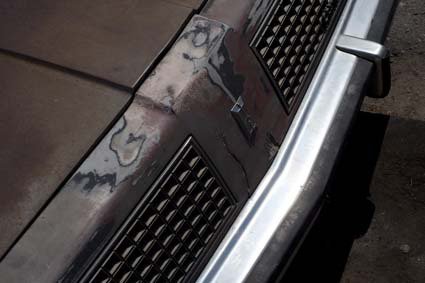 Where's David? "Is dead, man!" I'm weeping as Bryan pockets my 15 bucks for the information and gives me directions for the grave: Pathway C, number 817. "David's there," he says, "in that little cemetery on the hillside covered with pretty trees." A great spot, for sure. So I head off to his cemetery and find a neglected grave with David's surname on it: Perri. Then I'm crying as hard as I can next to some Mexicans who are opening a bottle to celebrate with their corpses. But behind the flowers is a chick's name, something or other Perri. And then the guard tells me there's no Pathway C, no number 817. "This is ridiculous," I tell him. "I paid that moron Bryan real money for this info." Bryan who idiotically pointed me to this hillside cemetery. The guard sends me off to another one, which has graves numbered something like my C817. I do a recap with the new guard: "A gringo, my friend David, died a year ago, moronic Bryan" – the whole thing. I explain the way things have been for me lately and he's doing the best he can – he can see my problem. He wants to help out, but when he realises he's running a cemetery with a C816 and a C818 but no C817, he's pretty pissed off. I don't want to make things worse, but I'm all keyed up myself and I can't help pointing out that his cemetery's a fucking mess. The personnel are slipshod. A few minutes ago I was in a better kept cemetery than this, and putting all these graves on hillsides is a recipe for disaster. "You'll lose the lot that way," I tell him. That really makes the poor guy cry. To put his mind at rest I say that maybe the grave isn't lost at all, it maybe just slid down to the paupers' plot at the bottom of the slope. This gets a smile out of him. In return he cheers me up by telling me maybe David isn't lost either, he just slid down among the paupers along with grave number C187. Mexicans like to be reassuring.

I go back home and have a beer while I tell my friends. They feel for me. In their opinion things are taking a bad turn here. They say it's because of the new couple in town. El Tuerto (One-Eye) and his wife Pretty Eyes, who's pregnant to the eyeballs and has been for two years now. What they mean is, Pretty Eyes refuses to unload her husband whose bad rep is attracting the evil eye onto the town. I don't know why, but I start scouring Tijuana for this couple the way I did for David. And I run into the woman who sells One-Eye sexy underwear – presents for his missus, Pretty Eyes, who just loves the stuff. "Garters for the devil," the woman tells me, or something like that.