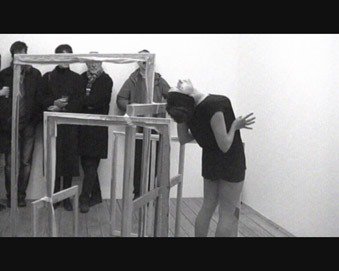 Scaramouche is pleased to present the group exhibition "Aesthetic Anarchy." Working site-specifically with found objects and non-traditional materials such as jigsaw puzzles, wax, and stretcher bars, Elena Bajo, Sara MacKillop, and Cristiana Palandri, install work that's latently, and often literally, performative. As opposed to a conception of art that's closed off from time and space and restricted to specific mediums and histories, "Aesthetic Anarchy" upends these values, exchanging pictorial space for a present-time that's in-flux, contingent, and engaged with the body.

Elena Bajo's A Script For a Form articulates an anarchist manifesto as a regimented structure of glass panes and wood blocks. In tandem with paintings and other appropriated objects, her quotidian building materials become the armature for "blind performances," in which dancers, actors, and musicians interpret a text through bodily movement and sound.

Cristiana Palandri also derives her work from the corporeal. A series of pen, white plaster, and ink drawings resemble tendrils of hair, while her Diatomea series, drawings of India ink on wood board, derive their title from microscopic alga, evoking similarly illegible forms. Applying uneven layers of paraffin wax to the drawings' surfaces, not only is her source material de-signified, drawing itself is deconstructed.

Evoking the floor-based works of Carl Andre, Sara MacKillop's installation jigsaws is composed of flat, large jigsaw puzzles that overlap and distribute along the floor of the gallery. Each is composed of hundreds of pieces, and much like the common materials used by many minimalist practitioners, MacKillop's use of everyday objects reconfigures their former, interactive utility for newfound artistic purpose - one that, much like the other artists in Aesthetic Anarchy, invasively encroach upon "white cube" conventions.

During the opening reception on November 13th, Elena Bajo will perform A Script For a Form as part of Performa 11's Fluxus Weekend. Orchestrating her manifesto in real-time with improvised movement and music, dancers and musicians will perform around Bajo's installation.

Opening: Sunday, November 13, 5 - 8pm. As part of Performa 11, Elena Bajo performs 'A Script For a Form' at 6:30pm
http://11.performa-arts.org/plan-your-visit/venues/scaramouche