The photographic work 'Delirious City' addresses the urban space from a visual, geometrical perspective with images in which buildings and architectural elements are deformed, multiplied and shrouded in mystery. 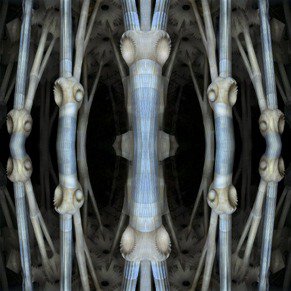 Delirious city is a work in progress. As Girbés himself has said, he is after ‘the construction of an excessive, unreal city out of time’ and to this end the artist culls fragments of architecture from his travels to Paris, Moscow, Naples, New York, Shanghai, Barcelona and Vienna.

Girbés’ work reworks the city planning and architecture of seminal names like Lluís Doménech i Montaner, Antoni Gaudí or Johann Fischer von Erlach, as well as contemporary architects like Norman Foster or the Russian architect Alexey Dushkin. ‘I reinterpret these bits of reality, bestowing them with a new function, distinct from what the architect planned for the original building’. Lines multiply and transform the perspective, as if they have gone through the prism of a kaleidoscope.

‘The outcome, often mistakenly believed to be a collage of various images, is always based on one single photo, which I still take with the same analogue camera I’ve always used’, Girbés explains. As a result, starting out from a snapshot captured on his Hasselblad, each image is scanned and meticulously processed by the artist to create divisions, repetitions and mirror plays.

This exhibition is another step in the work Antonio Girbés has been developing in collaboration with Ivorypress. The artist took part in the first series by C International Photo Magazine, as a member of the C Action programme and his work was included in the exhibition C on Cities curated by Ivorypress for the Venice Biennale in 2006. He was also selected for the project C Photo Real Venice, included in the 54th Venice Biennale 2011 with a large exhibition, also curated by Ivorypress, on the island of San Giorgio Maggiore in Venice.