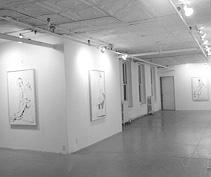 Please join us on February 6 at the opening Reception.

Florence Lynch Gallery. After a full year of gallery activities in a residential space on the Upper East Side, On February 21, 1998, The gallery relocated to its current location at 147 West 29th Street; on the third floor of a loft building, in Chelsea. Its location, within a two block radius of three major subway lines (N & R, 1 & 9, A, C, & E), places the gallery in an ideal location, giving it more visibility and accessibility to all. In its new exhibition space the gallery has resume its ongoing operation of bringing new talent to the forefront and initiating relationships with emerging and established artists. Paramount among its various goals is to create a comprehensive dialogue between the works of local, national and international artists. A parallel goal is to make Florence Lynch Gallery a prominent name on a national and international level.

Florence Lynch Gallery was founded by and is under the curatorial and administrative direction of Florence Lynch, formerly of the Salvatore Ala Gallery, New York. Ms. Lynch has a Master of Arts degree in Art Administration and a Bachelor of Science degree, and has worked as an independent curator since leaving the Salvatore Ala Gallery in 1994. She has worked extensively in Japan, Germany, France, The Netherlands, and Italy; and has done numerous curatorial projects in commercial and non-profit spaces in New York City.