The exhibition entitled "imprint/field/surface" shows film and sound installations, photographs and photo collages by Luke Fowler and Toshiya Tsunoda; what unites them is a shared interest in displaying simple objects, states and phenomena, which can be observed under shifting conditions. For his project Gareth Moore has asked 5 international artists to produce short films for children. The artists invited are: Ulla von Brandenburg, Keren Cytter, Geoffrey Farmer, Julia Feyrer and Harrell Fletcher. 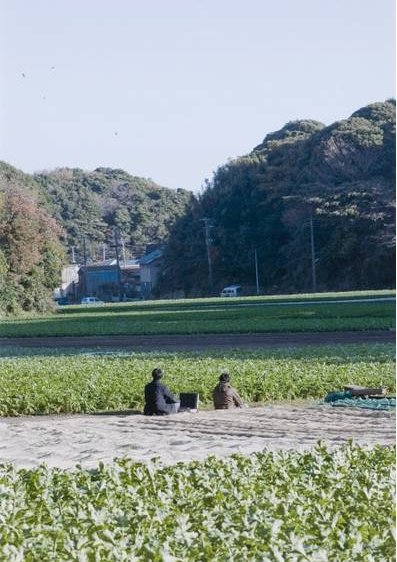 The exhibition entitled "imprint/field/surface" shows film and sound installations, photographs and photo collages by the artists, Luke Fowler (*1978, lives and works in Glasgow) and Toshiya Tsunoda (*1964, lives and works in Yokohama). Their works function at the threshold between sound and image. An installation spread over four spaces at Bielefelder Kunstverein forms the exhibition’s centre, consisting of four works, both recent and newly produced.
One of the central questions arises as to how a significant dialogue between seeing and hearing can come about today. Fowler’s and Tsunoda’s collaboration is not just characterised by the technical combination of 16mm film and acoustic systems of reproduction. Much rather, what unites them is a shared interest in displaying simple objects, states and phenomena, which can be observed under shifting conditions.

Luke Fowler works predominantly with the medium of film. His film installations mark a departure from the traditional approaches of documentary films and the ways such films can be presented. Partially forgotten concepts and experiments, be they from Scottish psychiatrist, R.D. Laing (1927–1989) or avantgarde composer and later political activist, Cornelius Cardew (1936–1981), stand at the centre of Fowler’s film portraits. These are not conventional portraits, as we know them from journalism or documentary filmmaking. All of his portrait-films consisted of found-footage, his own shots, archive material, and new interpretations of texts. This process shifted the subject of the portrait increasingly into the background, so that the film itself became an organ of speech through its composition in editing and soundtrack. Fowler has been shooting on 16 mm for six years and in his latest works he takes up film’s materiality and its /historical conditions in relation to sound and image. His works reveal both a particular interest in structuralist film and in the directness of the filmic presentation techniques in the Expanded Cinema projects of the 1960’s. His artistic work is further characterised by intensive collaboration with other film and sound artists – as in this exhibition project with Toshiya Tsunoda.

Colleagues like to describe Toshiya Tsunoda, who originally studied painting in Tokyo, as a "Field Recording Sensei". A new understanding of "Field Recording" characterises his approach. As a rule, this genre of contemporary music concerns itself with recording ambient sounds outdoors. However, instead of restricting himself to naturalistic recordings, Tsunoda has developed his pieces into unique compositions dealing with the relationship of humans to nature and of space to experience. Many of his earlier works concentrate on individual phenomena, like oscillations in solid materials or vibrations arising from the air. They become audible and reveal their hidden beauty in every sonic and structural detail. Tsunoda gathers never-before heard sounds from things and landscapes with the fastidious approach of a scientist. Yet his work is concerned with philosophical, rather than scientific questions about the constitution of places how we experience them.

Since 2008, Luke Fowler and Toshiya Tsunoda have been working together regularly in the context of exhibitions, film projects or publishing music. Together, they have so far created the "Composition For Flutter Screen", a film installation produced for the Yokohama Triennial (2008) and shown in the Serpentine Gallery in 2009; the film, "A Grammar For Listening Part 3" (2009), the album, "Familial Recordings" (Edition.t, 2010) or "Helen" (part of the series: Tenement Films, produced and broadcast on British Channel 4).

For his project "Children’s Films" Gareth Moore has asked five international artists to produce short films for children. The artists invited, Ulla von Brandenburg (*1974), Keren Cytter (*1977), Geoffrey Farmer (*1967), Julia Feyrer (*1982) and Harrell Fletcher (*1967) were free to focus on any particular topic, shaping the content and form of their respective film. Gareth Moore collated the five contributions into an episodic film and provided it with open and closing credits. In this way, an entertaining children’s film of more than 20 minutes came about. One point of reference for this project was, alongside his own fascination with the formats of popular children’s television, the "Children’s Tapes" (1974) of the American artist Terry Fox.

The particular quality of Moore’s concept does not, however, lie in the collaborations and in working with the film medium. The form of presentation and the fact that only children can come to the film are just as important. Grown- ups are only allowed to watch it, if an individual child needs accompaniment. The exhibition format Moore has developed for "Children’s Films" moves between children’s cinema, pedagogical film and travelling circus. That is because the film is not just being shown in the Kunstverein, but is going on tour throughout Bielefeld city. Weekly showings with a 16mm projector will take place in different locations in schools, centres for children and young people. The place and time are announced via posters in the exhibition space of the Bielefelder Kunstverein and in the Bielefeld municipality, as well as over the internet via the project’s own website. For that reason, only the announcements and the film posters designed by the artists are on display in the upper floor of the Bielefelder Kunstverein.

In this way, children are the “exclusive” target-group for Moore’s project. Regular visitors remain debarred from entering the actual body of the exhibition. With a certain charm, Moore thus subverts not just the usual form of presentation of an individual exhibition in an institution but also the communication itself. There are not many grown-up visitors, or art critics too, who will experience the episodic film by seeing it for themselves. "Children’s Films" is commissioned by Bielefelder Kunstverein (D), International Project Space, Birmingham (GB) and Contemporary Art Gallery, Vancouver (CND). Subsequent to the exhibition in the Bielefelder Kunstverein, the project will be shown in England and Canada in 2012. Further information on the project’s website: http://www.childrensfilms.ca/

To mark the exhibition, a 32-page brochure will be published (German/English), followed by a publication at the beginning of 2012 that will document the lecture program at the University of Applied Sciences in addition to the exhibition.