On this occasion, together with van Dongen's large format drawings, the artist presents a series of small sketch drawings. At the same time on view the work by Kimberly Clark, group founded by the artist, where she develops a more perfomatic and sculptural side of her work. 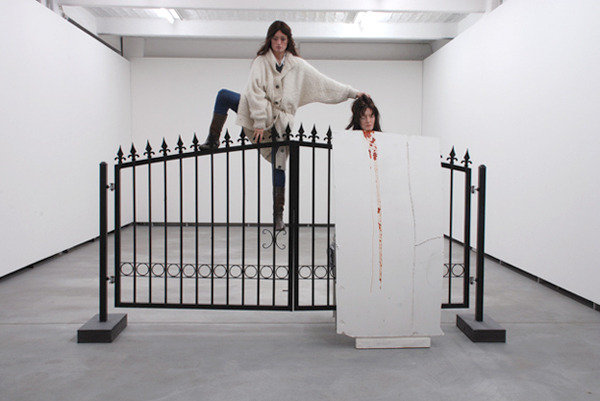 From the innocent face of a young woman to abstraction and from abstraction to eternity. Different dimensions of time through which Iris van Dongen slides the portrayed women in her recent works.

Well known for her pastel portraits, Iris van Dongen (1975 Tilburg, Netherland) achieves joining reality with elements of a transitory character –the expression of apathy, the captured vitality, wrapped in white sheets, trying to make time stand still and beyond that, to remove it completely. We see women who seem to hide behind curtains, absorbed in their worlds. Van Dongen takes us on a never ending journey through time, never alone but always accompanied by the flowering of youth.

In her technique we find glimpses of a renaissance style, through the use of warm and golden colors, characterized by painters as Raphael and Da Vinci, she creates a link to a time known for its humanist aspect and for its craving for immortality.

On this occasion, her first solo show in Spain, together with her large format drawings where color and light are distinctive elements of her work, we also find a series of small sketch drawings (10x5 cm), which are fundamental to the understanding of her creative process and at the same time define her personal ideology.

The working project of van Dongen is expanded beyond the pictorial drawings when she in 2005 founds the artist group “Kimberly Clark” where she develops a more perfomatic and sculptural side of her work. The group, consisting of Iris Van Dongen, Eveline van de Griend and Ellemieke Schoenmaker, generates their projects from street performances which characterize not only the role of young women today, but also the clichés she carries.

Focusing on their appearance, they show themselves wearing flashy clothes from luxury designers, drinking alcohol, smoking cigarettes or listening to rock music, portraying powerful women who personalize the stereotypes and clichés of the eternal teenager or a unique blend between femme fatale and "bad girl ". Ultimately, performances of a narcissistic lifestyle outside the rules of society, supported by elements of youth consumption, fashion, drugs, or the pure pleasure of provocation.

Despite her age, the artistic career of Iris Van Dongen is noted for its international scope and rigor, developing a constantly changing style, always taking into account the current circumstances of a generation driven by the role of young, beautiful and mysterious women. After studying at the "Academie voor Kunst" in Hertogenbosch, the Netherlands, the artist won two scholarships for successive residencies at "Kunstlerhaus Bethanien" in Berlin. Among the many group exhibitions both in galleries and museums we highlight: the Berlin National Museum, the Van Gogh Museum Amsterdam, Stedelik Museum of Amsterdam, The CGAC in Spain, The Flag Art Foundation in New York, La Biennale Tinara, White Box in New York ... Individual projects include: The center of the Netherlands De Hallen, Diana Stigner Gallery in Amsterdam, the Stedelik Museum, Gallery and Cargnel Bugada French, Greek gallery The Breeders well as in the Salon Gallery 94, New York among others.