Hommage a CAN. Visual artists reflect on the pioneering role of CAN, the avant-garde rock band from Cologne. The group show remembers the extraordinary potential of a band from Germany whose playing gained them cult status all over the world - in terms of composition, sound, musical skill and group dynamics. 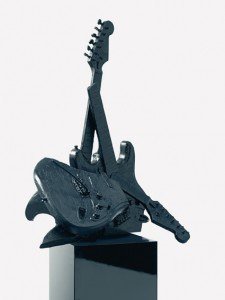 In 1971 CAN, an avant-garde rock band from Cologne, caused an unprecedented stir with their third studio album "Tago Mago". At that time, no other band from the international spectrum of experimental rock had achieved such a remarkable degree of sound and structural awareness, and they continue to inspire music pioneers to the present day. It is little wonder, therefore, that CAN enjoy particular admiration among fine artists.
To mark the 40th anniversary of the appearance of "Tago Mago", now fine artists from all over the world have created new works reflecting on the path-breaking role of CAN and showing their reverence for the band. The show remembers the extraordinary potential of a band from Germany whose playing gained them cult status all over the world - in terms of composition, sound, musical skill and group dynamics.

CAN members Jaki Liebezeit (drums), Irmin Schmidt (keyboard) and Holger Czukay (bass) still continue as active musicians, devoting themselves to successful individual projects. Malcolm Mooney, a member of CAN in the band’s early phase, has worked primarily as a fine artist for more than 30 years now; of course he is one of those exhibiting here.

More detailed information on the band and their label Spoon Records U.K. ltd. can be found on the CAN website http://www.spoonrecords.com
A catalogue (g/e) + audio cd accompanying the exhibition have been published by modo Verlag, Freiburg i.Br.

Curator of the exhibition "Halleluhwah! Homage à CAN", which was shown previously in the Stuttgart gallery ABTART, is Christoph Tannert, well-known since the 1980s for his projects and publications on border-crossing between art and rock music.