For more than forty years, the photographers Bernd and Hilla Becher worked on creating an inventory of industrial architecture. The couple have always held particular interest for the Ruhr region. The exhibition Mines and Mills - Industrial Landscapes systematically examines this aspect of their work for the first time. 'Cloud Studies - The Scientific View of the Sky' presents six stages of meteorological photography up to the newspaper images in the US that were captured by the first weather satellites in the 1960s. 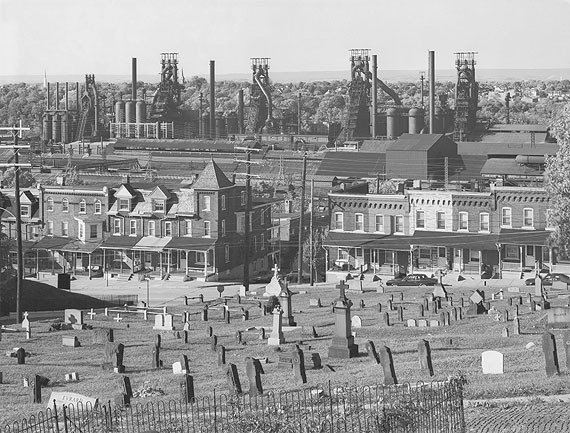 For more than forty years, the photographer couple Bernd und Hilla Becher (*1931-2007/*1934) worked on creating an inventory of industrial architecture. Warehouses, shaft towers, gas tanks, blast furnaces as well as half-timbered houses are among the subjects they photographed throughout Germany, England, France, Central Europe, and the USA. Calling these buildings “anonymous sculptures,” they refer to the artistic quality of the constructions, which played no role for the buildings’ largely unknown builders and users. Their photographs attempt to draw attention to these hidden sculptural qualities and to document them historically as a building tradition in decline.

Bernd and Hilla Becher have always held particular interest for the industrial architecture in the Ruhr region. The exhibition Mines and Mills – Industrial Landscapes systematically examines this aspect of their work for the first time. Even today, names such as the Concordia and Hannibal collieries or Gutehoffnungshütte stand for the industrial history of the Ruhr region. Instead of concentrating on individual buildings, the exhibition approaches the mining facilities as a whole and in the context of their urban or natural surroundings. This typology, which the Bechers described as “industrial landscape,” compares the Ruhr region with similar complexes elsewhere in Europe and the USA.

As with their typological multiple and serial views of buildings, Bernd and Hilla Becher strive for a comparative perspective in their industrial landscapes. Demonstrating great photographic restraint in their approach and in the name of a “New Objectivity” dedicated solely to the object, they stand in a long tradition of proponents of the documentary gaze that includes Eugène Atget, Karl Blossfeldt, Walker Evans, Albert Renger-Patzsch and August Sander. Their influence on the history of photography extends from the establishment of the “Düsseldorf School” into the present. “The main aim of our work is to show that the forms of our time are technical forms, although they did not develop from formal considerations. Just as medieval thought is manifested in the gothic cathedral, our era is revealed in technical buildings and apparatuses,” stated Bernd and Hilla Becher in a conversation from 2005.

The industrial landscapes can be read from historical and social perspectives, to an even greater extent than the familiar photographs of simple building typologies. Next to the monumental, industrial buildings one often sees residential constructions, gardens, and allotment gardens, which convey how intertwined the organization of life and work was at the time and how deeply rooted people were in this city-like structure. Photographed at waist-height, the broad, open views of the horizontally composed photographs have an aesthetic that is almost atypical of the Bechers. However, the images adhere to a systematic approach also employed in this exhibition, to the archival thinking of the artist couple.

The exhibition curated by Heinz Liesbrock was organized by the Josef Albers Museum Quadrat in Bottrop and presented there in 2010. The exhibition at Fotomuseum Winterthur is curated by Thomas Seelig.

The accompanying publication Bernd & Hilla Becher – Bergwerke und Hütten with a text by Heinz Liesbrock has been published by Schirmer/Mosel Publishers in Munich.

Artist’s Talk
An artist’s talk with Hilla Becher (together with Lothar Schirmer and Thomas Seelig) will take place on Sunday, November 27, 2011 at 11:30 am.

Film Screening
The film “Die Fotografen Bernd und Hilla Becher” by Marianne Kapfer will be shown on January 11, 2012 at 7 pm

Cloud Studies
The Scientific View of the Sky

The English pharmacist and meteorologist Luke Howard wrote in 1802 in the preface to his manuscript On the Modification of Clouds: “Clouds are subject to certain distinct modifications, produced by the general causes which affect all the variations of the atmosphere; they are commonly as good visible indicators of the operation of these causes, as is the countenance of the state of a person’s mind or body.” Eighty years later, meteorologists had still not reached a consensus on how to classify, label, and read the forms of clouds. It was during this time that scientists first began using photography to record and measure clouds. With its help, they attempted to gain precise and accurate images that would provide insight on the interplay between clouds and the atmosphere and which could be used to create and convey a classification of cloud forms.

The exhibition CLOUD STUDIES – The Scientific View of the Sky presents six stages of meteorological cloud photography, from its infancy in the 1880s – in Switzerland with the first images by Albert Riggenbach photographed from Mount Säntis – up to the newspaper images in the United States that were captured by the first weather satellites in the 1960s. At the beginning of the 20th century, cloud formations and cloud systems were investigated foremost by the military and led to fundamental insights into interrelated weather situations.

CLOUD STUDIES – The Scientific View of the Sky is a rich collection of photographs, notes, records and atlases from diverse research sources and depicts the origins of contemporary weather forecasting. Each of the six parts of the exhibition represents a different scientific and photographic view of clouds while reflecting on the “history of the gaze” as well as the history of the medium with its various photographic mechanisms and reproductive technologies.

An additional theme running throughout the exhibition is the development of science and its varying ideas about clouds. The protagonists and working methods change over time—from the ambitious, wealthy amateur Ralph Abercromby to the anonymous teams of weather satellite technicians. Whereas Riggenbach still wished to capture images of ideal cloud types, the view of the cloud constellations and their chaotic systems expands with the introduction of film, at the latest, and with the constant recording and measuring capacities of digital cameras, which transmit images to earth, where they are evaluated and publicized.

Conceived by curator Helmut Völter (Leipzig), the exhibition CLOUD STUDIES – The Scientific View of the Sky explores the question as to how all these changes influenced the intentions, concepts, and technical developments associated with images of the clouds. It shows how similar or dissimilar photographs of clouds can be, when photographed according to individual specifications. Ultimately it is left to the viewer to decide if and how scientific cloud photography differs from related and frequently published motifs from the history of art and photography.

The exhibition has been developed in cooperation with the Museum für Photographie Braunschweig.

An accompanying publication Wolkenstudien – Sechs Stationen der wissenschaftlichen Wolkenfotografie with a text by Helmut Völter is being published by Spector Publishers, Leipzig.

Accompanying program:
An image focus at noon is offered for the exhibition:
January 24, 2012, 12:15–12:45 pm with Astrid Näff: Raggy Inky Cloud – Photographic Fixations of the Ephemeral

Friday, 25.11.2011, 6-9 p.m. Bernd and Hilla Becher: Mines and Mills – Industrial Landscapes. Cloud Studies – The Scientific View of the Sky.
Opening with introductions to the exhibitions at 7.00 p.m.