The second of 3 exhibitions associated with It Happened at Pomona: Art at the Edge of Los Angeles 1969-1973. It demonstrates how concerns with perception and phenomenology intersect with and develop differently in the post-conceptual work. Winer, as gallery director and curator, championed a group of artists who were channeling the experiential qualities of minimalist and post-minimalist sculpture into performance art, video and conceptual photography. 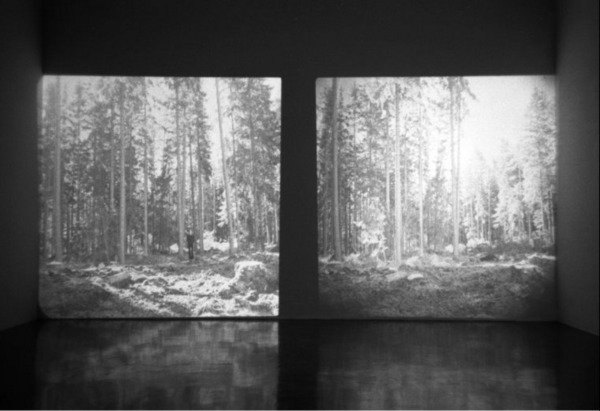 Pomona College Museum of Art is pleased to announce the opening of the second of three exhibitions associated with It Happened at Pomona: Art at the Edge of Los Angeles 1969–1973. "Part 2: Helene Winer at Pomona" opens December 3 and continues through February 19, 2012. The public reception will be on Saturday, December 3, 2011 from 5 to 7 p.m. A press preview will be held Saturday, December 3, 2011, from 3 to 5 p.m.

In addition to the public reception, the Museum will host an artist conversation moderated by Helene Winer with artists in the exhibition including John Baldessari, William Leavitt and Allen Ruppersberg, on Sunday, February 19, 2012 at 3 p.m. in Pomona College's Rose Hills Theater, followed by a reception at the Museum. All events are free and open to the public.

Building on the insights suggested in "Part 1: Hal Glicksman at Pomona," the exhibition "Part 2: Helene Winer at Pomona" demon­strates how concerns with perception and phenomenology intersect with and develop differently in the post-conceptual work of a group of Southern California artists working in the early 1970s. Whereas Glicksman focused on artists who were producing phe­nomenologically-oriented abstract sculptures and environments, Winer championed a group of artists who were channeling the experiential qualities of minimalist and post-minimalist sculpture into performance art, video and, most significantly, conceptual photography featuring staged scenarios, realistic environments, and innovative, often wryly humorous uses of language. This tran­sition has been specifically associated with the appropriation artists of the later 1970s, active in New York and often referred to as "The Pictures Generation."

"Part 2: Helene Winer at Pomona" demon­strates the crucial link between Southern California artists in the early 1970s and the theoretically-informed investigations of post­modernism that would follow in New York and elsewhere. The exhibition documents Winer's curatorial vision and her recognition of a uniquely Southern Californian interpre­tation of post-minimalism and post-Conceptualism that would alter the course of art history.

The influence of John Baldessari on the development of appropriation art in New York has been well documented; however, rarely is this influence explored in depth and across the horizon of the Southern California landscape. In fact, as Baldessari has acknowledged (in Richard Hertz's Jack Goldstein and the CalArts Mafia), he regu­larly took his CalArts students on the 60-mile journey from Valencia to Claremont to see the exhibitions that Helene Winer curated at Pomona College: "She would show work no one else was interested in." This exhibition includes two early works by Baldessari, including Evidence: A Potential Print (1970), which scatters, in a corner, ashes from Baldessari's 1970 Cremation Project (a work in which he burned all of his paintings made before 1966 in a mortuary crematorium).

Another highlight of "Part 2" will be the re-creation of two important early sculptures by Jack Goldstein. For his 1971 solo exhibition at Pomona, Goldstein exhibited a series of geo­metric constructions using large wooden blocks, nails, glass, and photographic paper. The current exhibition will re-create two of Goldstein's early sculptures—freestanding wooden constructions stacked precariously high, which in their potential threat of col­lapse, elicit physical responses in the viewer. While these sculptures have been all but for­gotten, by Goldstein's own testimony they were instrumental in shaping his approach to his films, which are seen as a cornerstone of the Pictures Generation. Goldstein's sculp­tures illustrate how compositional forms can allude to images that do not necessarily appear in their material expressions, but through subtle references become images in the minds of viewers.

"Part 2" will also include major works from Winer's exhibitions of Bas Jan Ader, Ger Van Elk, William Leavitt, Allen Ruppersberg and William Wegman, which were among the earliest exhibitions of significant work by these artists. The exhibition will bring togeth­er pieces which have rarely or never been exhibited since their creation, and works that have not been exhibited together since their original presentations at Pomona. This will include Bas Jan Ader's monumental two-screen slide projection work, Untitled (Sweden), which has not been exhibited in the United States since its first presentation in 1971 at Pomona. The exhibition also includes Leavitt's seminal California Patio and Ruppersberg's conceptual masterwork, Where's Al?, both of which were shown for the first time at Pomona.

In addition to her focus on the newest directions in conceptual art, Winer also intermittently programmed shows by a slight­ly older generation of leading Los Angeles artists, often exhibiting works that were unusual within the artists' bodies of work. "Part 2" will include works from Joe Goode, John McCracken and Ed Moses, including a rare wall-hanging plank by McCracken, a staircase sculpture by Goode, and a resin painting by Moses. Winer's interest in per­formance art will be represented by documentation of projects by Chris Burden, Hirokazu Kosaka, Wolfgang Stoerchle and John White, including a never-before screened fragment from the controversial performance by Wolfgang Stoerchle that was long rumored to be the reason for Winer's departure from Pomona in 1972.

"Part 2: Helene Winer at Pomona" will be supplemented by the January 21, 2012 "Performance at Pomona" as part of the Pacific Standard Time Performance and Public Art Festival. "Performance at Pomona" consists of a series of three perfor­mance pieces by artists represented in each of the three segments of the exhibition. John White will represent "Part 2" with the recre­ation of the 1971 performance Preparation F, involving the Pomona College football team. Also included are A Butterfly for Pomona, a new pyrotechnic performance by Judy Chicago, based on her Atmosphere perfor­mances of the early 1970s, and Burning Bridges, a recreation of James Turrell's 1971 flare performance.

The catalogue for the exhibition It Happened at Pomona: Art at the Edge of Los Angeles 1969–1973 chronicles the activities of artists, scholars, students and faculty associated with the College during this period. The first exploration of a creative hotbed of 1960s and 1970s Southern California art, it provides new insight into the relationship between post-minimalism, Light and Space art and various strands of Conceptual art, perfor­mance art and photography in Southern California, while contributing substantial new information about interconnections between artistic developments in Los Angeles and New York. Featuring scholarly essays by Thomas Crow, Rebecca McGrew, Glenn Phillips and Marie Shurkus, new interviews with Hal Glicksman and Helene Winer, archi­val reprints and 18 new interviews with artists of the era, the book contains 280 images, many never before seen. The cata­logue is available for purchase for 49.95 USD through D.A.P./Distributed Art Publishers and Artbook.com.