Mexico 2000/2012. A look at the young Mexican artistic scene that has consolidated itself into a new aesthetic and discursive approach. The 24 artists included, most of them born after 1975, with works representing a variety of media (installations, videos, design, photography, and film) reveal the sharp awareness they have of today's circumstances and how art lives and works, revealing its states of emergence and demanding everyone's participation. 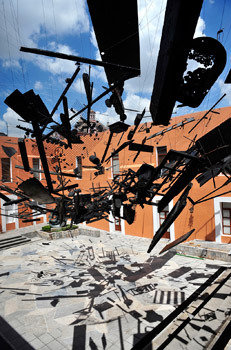 Resisting the Present: Mexico 2000 / 2012 offers a look at the young Mexican artistic scene, active since 2000, that has consolidated itself into a new aesthetic and discursive approach.

Heirs to the previous generation, which had taken and reinterpreted the entire repertoire of Western art (from American Modernism to Minimalism, through European movements such as Fluxus or Situationism to Conceptualism and South American Neo-constructivism), and having acquired an incontestable position internationally through figures such as Gabriel Orozco and Francis Alÿs, these young artists are confronted with a darker and increasingly violent historical context. For them, the reformulation of art in its interaction with life, in an active social environment, is the essential proposal. The artists in this exhibition fully commit themselves to their actuality, and their most significant works directly question the political and social conditions in which they live.

The revolution produced by economic globalization (signing of NAFTA- 1994) and technology, the failed hope of access to a democratic society, as well as increasing social tensions linked to corruption and violence have become a part of the daily life of Mexican civil society. Through different strategies in the form of fictions, poetic activism and the use and reinterpretation of symbols, the works of these artists visually translate the tensions and multiple paradoxes that societies today are dealing with as they succumb to the problems of globalization.

The 24 artists included, most of them born after 1975, with works representing a variety of media (installations, videos, design, photography, and film) reveal the sharp awareness they have of today's circumstances and how—now more than ever—art lives and works, revealing its states of emergence and demanding everyone's participation. The presence of four filmmakers in the project emphasizes the fact that the last decade has also been witness to the rise of a refined, lucid and critical cinema in Mexico.

This exhibition is also an opportunity to recall some of the bonds established between Mexico and France through unique figures, poets, and intellectuals such as Man Ray, Jean Genet, Robert Desnos, André Breton and Roger Caillois, whose presence is manifest in the works of some of the artists (Iñaki Bonillas, Mariana Castillo Deball, Jonathan Hernández, Pablo Sigg).

Resisting the Present. Mexico 2000/2012 is curated by Angeline Scherf and Ángeles Alonso Espinosa, and is the result of a joint effort between the Musée d'Art moderne de la Ville de Paris and Museo Amparo. It will be presented at Museo Amparo from October 15th, 2011 through January 15th, 2012 and at the Musée d'Art modern de la Ville de Paris from March 8th through July 8th, 2012.

As part of the activities accompanying the exhibition, Museo Amparo will host a series of lectures with artists in the exhibition from October 18th through January 12th. Additionally, film presentations will be held on November 12th and 19th, and December 3rd and 10th at the Capilla del Arte UDLAP in collaboration with the Universidad de las Americas-Puebla, with screenings by four filmmakers: Natalia Almada, Amat Escalante, Carlos Reygadas and Nicolás Pereda. Lastly, there will be a video presentation by Alejandro Jodorowsky at the Universidad de las Americas-Puebla auditorium on Thursday, December 1st, with the participation of Mr. Jodorowsky.

The exhibition includes a catalogue with texts by Serge Gruzinski, Alejandro Jodorowsky, Magalí Arriola, Guillermo Fadanelli, Michel Blancsubé, Angeline Scherf and Ángeles Alonso Espinosa. The catalogue will be available at the Museo Amparo Store and distributed internationally through Editorial RM.