The UK premiere of her recent work, Arabesque, 2011, a multi-channel video installation which reflects on the legacy of two compositions; one composed by Robert Schumann for his wife Clara, the other composed by Clara Schumann for her husband Robert. 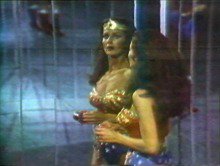 American artist Dara Birnbaum was one of the first to subvert the language of television and is internationally recognised for her pioneering video works made over the past three and a half decades.  For her South London Gallery exhibition she presents the UK premiere of her recent work, Arabesque, 2011, a multi-channel video installation which reflects the legacy of two piano compositions; one composed by Robert Schumann for his wife Clara, the other composed by Clara Schumann for her husband Robert.  Spanning the SLG’s main exhibition space and first floor galleries, the show also includes the seminal work, Attack Piece, 1975, Birnbaum’s first surviving installation, and a series of her single channel works from the 1970s.  A survey of Birnbaum’s analysis of television through the 1980s, including Technology/Transformation: Wonder Woman, 1978-79, will also be presented as a one-off screening on 11 January 2012.

Birnbaum’s Arabesque, 2011, surveys and re-presents multiple perspectives on Robert Schumann’s Arabesque Opus 18, 1839, through a multi-screen video installation occupying the SLG’s main exhibition space.  Still footage from the 1947 film Song of Love, a melodrama featuring Arabesque, is set against Birnbaum’s edit of a broad selection of performances of the piece taken from YouTube clips and excerpts from Clara Schumann's diary. In Birnbaum’s words, “the more the viewer is exposed to the Arabesque masterwork, the more it becomes neutralized by the diverse range of musicians attempting to reach for it”. In the course of her research Birnbaum became increasingly interested in the relationship between Robert Schumann and his wife Clara, an accomplished pianist and composer who cared for him through phases of depression and madness, as well as for their eight children, supporting them through her playing. For Birnbaum, the relative obscurity of Clara Schumann’s composition Romanze 1, Opus 11, which might be argued to be of similar virtuosity to Robert Schumann’s widely acclaimed masterpiece, symbolises the power struggle between men and women, a concern which has informed her practice for more than thirty years.

In the SLG’s first floor galleries a series of Birnbaum’s earliest single channel works from the 1970s are shown alongside the double projection installation, Attack Piece, 1975. In Attack Piece Birnbaum is shown ‘armed’ with a still camera while she is filmed by her mostly male collaborators (including David Askevold, Dan Graham and Ian Murray), who attempt to invade her territory. Other works use video to create psychological self-portraits, or explore the tension between the performative and the psychological.  All of the works are in different ways underpinned by the artist’s exploration of the relationship between the camera, performer and viewer, and many reveal her questioning of gender stereotypes and the exploitation in the media of women’s roles.

With thanks to Marian Goodman Gallery, New York – Paris, and Wilkinson Gallery.

Born in New York in 1946, Dara Birnbaum received a Bachelor of Architecture from Carnegie Mellon University, Pittsburgh in 1969; a B.F.A. in Painting from the San Francisco Art Institute in 1973; and a Certificate in Video and Electronic Editing at the Video Study Center at the New School for Social Research, New York, in 1976. She has received many distinguished awards, most recently Anonymous Was A Woman and the Rockefeller Creative Artist Residency earlier this year, the highly prestigious United States Artists Fellowship in 2010, and a Pollock Krasner Foundation Grant in 2011. A retrospective of her work was presented at S.M.A.K. / Stedelijk Museum voor Actuele Kunst, Ghent  in 2009 and this travelled to the Museo de Arte Contemporaneo de Serravles in 2010. Published in conjunction with this exhibition is the catalogue Dara Birnbaum: The Dark Matter of Media Light. Solo exhibitions have been seen at the Whitney Museum of American Art, NYC; The Jewish Museum, New York; IVAM Centre Julio Gonzalez, Valencia; Kunsthalle Vienna; and a solo screening at MoMA, NYC.

Film Screening: Early Video in the US Wed 25 Jan, 7pm, £5/£3 conc
This screening focuses on early works by video artists including Vito Acconci, Ant Farm, John Baldessari, Lynda Benglis, Nancy Holt, Richard Serra and TVTV. In the late 1960s and early1970s these artists began to experiment with video as an art form, making performative films and TV intervention pieces which introduced a critique of television as a powerful new medium.

The South London Gallery has an international reputation for its programme of contemporary art exhibitions and live art events, with integrated education projects for children, young people and adults. Exhibitions profile the work of established international figures such as Alfredo Jaar, Rivane Neuenschwander, Tatiana Trouvé and Superflex; as well as that by younger and mid-career British artists such as Eva Rothschild and Ryan Gander. Group shows bring together works by established and lesser known British and international artists. The gallery’s live art and film programme has included presentations by Rachel Gomme, Nathaniel Mellors, Gail Pickering, Gisele Vienne and Charles Atlas.