Thw group show "Paris: Works from California" suggests rediscovering some artists of the Californian scene which contributed to this forming. In the project room some works by Ed Moses and Ed Ruscha, which bring another light to the exhibition. 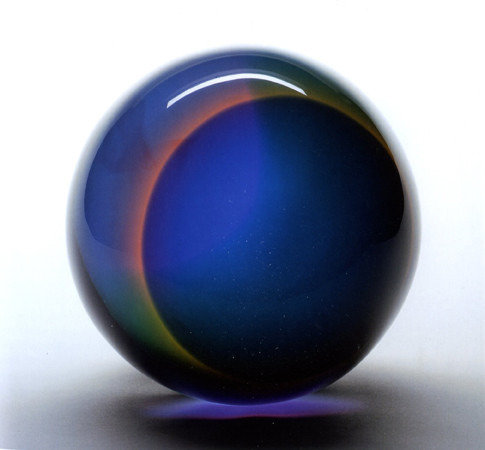 As the epicenter of the art world of the art shifted from Paris to New York following World War II, a new scene emerge in California. Dominique Fiat Gallery is now at the time of the West Coast, in echo in the collaboration of sixty cultural nstitutions, which celebrate the history of postwar Southern California art. “Pacific Standard Time // Paris” suggests rediscovering some artists of the Californian scene which contributed to this forming.

At the end of the 1960s, giving up the traditional forms of sculpture and painting, the «Light and Space» artists are intrigued by questions of perception that by notion of crafting discrete objetcs. Whether by directing the flow of natural light through the use of reflective, translucent, or transparent materials, these artists each created situations capable of stimulating heughtened sensory awareness in the receptive viewer.

Within the context of Southern California in the late 60s, Laddie John Dill quickly pushed his way into the conversation of how to evoke the region’s unique landscape, a collision of natural and architecural beauty, and industrial toxic waste. The « light sentences » were experiments in alchemy : wielding the presence and absence of mercury, uranium and hélium as a wizard waves. The ambience of the light was carrefully controlled to keep the work contained in its immediate footprint.

Fred Eversley’s sculptures aimes to combine the inherent beauty and unique physical properties of a material object with the concept of mathematical purity and also encourage the participatory role of the spectator, in turn creating live kinetic sculptures. His scientific and aesthetic understanding of form prevails, as does his desire to encapsulate parabolic structures and represent of a formal manifestation of the principles of energy and kinetics.

Peter Alexander has consistenly explored issues of transparency, illumination and color optics throughout his career, using imagery that is frequently based on his response to the California landscape and the Pacific Ocean. The «Window» work acts as a prims, reflecting his own edges to kaleidoscopic effect.

Throughout her career, Helen Pashgian has worked in what once was deemed a distinctly West Coast set of preoccupations—light, color, and the phenomenon of vision. She continues to make the ineffable somehow present and apparent.

In parallel, will be presented some works by Ed Moses and Ed Ruscha, which bring another light to the exhibition.

Direct inheritor of abstract expressionism and minimalism; Ed Moses, at over 80 years old, remains a prolific fixture of the Los Angeles art scene, and is respected for his inventiveness as an artist and his attentiveness to new developments in contemporary art. Always working with process and experimenting with materials as a painter, he has been critically lauded for his bold composition and innovation.

In the « Vacant lots» series, Ed Ruscha evokes his ambivalent relation in Los Angeles. Attentive to the plastic aspects of the city and the townscape, he reveals its obsessions, frustrations and dilapidations.