Circa 1971: Early Video & Film from the EAI Archive. Comprising 20 moving-image pieces from the Electronic Arts Intermix (EAI) collection of over 3,500 media artworks -spanning the 1960s to the present- Circa 1971 initiates provocative exchanges with the art from the same time period that is in Dia's collection. The exhibition, which celebrates EAI's 40th anniversary. 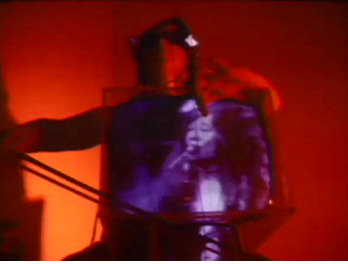 Dia Art Foundation is pleased to present Circa 1971: Early Video & Film from the EAI Archive at Dia:Beacon, Riggio Galleries in New York’s Hudson Valley from September 17, 2011–September 4, 2012. Comprising 20 moving-image pieces from the Electronic Arts Intermix (EAI) collection of over 3,500 media artworks—spanning the 1960s to the present—Circa 1971 initiates provocative exchanges with the art from the same time period that is in Dia’s collection and on view at Dia:Beacon. The exhibition, which celebrates EAI’s 40th anniversary, is organized by guest curator Lori Zippay, Executive Director of EAI.

The selections for Circa 1971 reflect this first generation’s interest in the conceptual, political, formal, and cultural implications of video’s immediacy and reproducibility. They also reveal several key themes, including the political activism that informed much of the early video subculture; inquiries into the production, reception, and circulation of media images; and explorations of identity, gender, and self. Therein, the works themselves are remarkably eclectic: while many of the pieces engage with the prevailing discourses of contemporary art at the time–including body art, performance, Process art, Minimalism, and Conceptual art–others reference avant-garde cinema, and still others take the form of “guerrilla television” documentaries or experiments in image processing.

By focusing on a specific period in time (1970–72), Circa 1971 presents a snapshot of a diverse cultural moment—or, more accurately, a countercultural moment—and the fertile political and artistic landscape from which these works emerged. EAI was created as an alternative paradigm to support a burgeoning art form that was neither supported by the commercial art market nor the commercial television system. In this respect, its founding parallels Dia’s own. Taken from the Greek prefix meaning “conduit” or “through,” Dia was launched to enable artists to create projects that due to their scale or scope could not be accommodated by traditional galleries or museums.

Circa 1971 offers a framework for reconsidering the multiple histories, artistic practices, and cultural contexts that have informed moving-image art over the past four decades. It reflects Dia’s commitment to presenting innovative special exhibitions at Dia:Beacon, and follows earlier screenings at the museum, including Lives of Performers: Art, Film, Performance around 1970, a series that was organized by Douglas Crimp in 2006.

Founded in 1971, Electronic Arts Intermix (EAI) is one of the world's leading nonprofit resources for video art. A pioneering advocate for media art and artists, EAI fosters the creation, exhibition, distribution, and preservation of video art and digital art. EAI's core program is the distribution and preservation of a major collection of over 3,500 new and historical media works by artists. EAI's activities include viewing access, educational services, extensive online resources, and public programs such as artists' talks, exhibitions and panels. The Online Catalogue is a comprehensive resource on the artists and works in the EAI collection, and also features extensive materials on exhibiting, collecting and preserving media art: www.eai.org.