To celebrate the 150th anniversary of the birth of the poet and painter the V&A will hold a display of about 50 of his paintings from the period 1928 to 1939, never before displayed outside India. 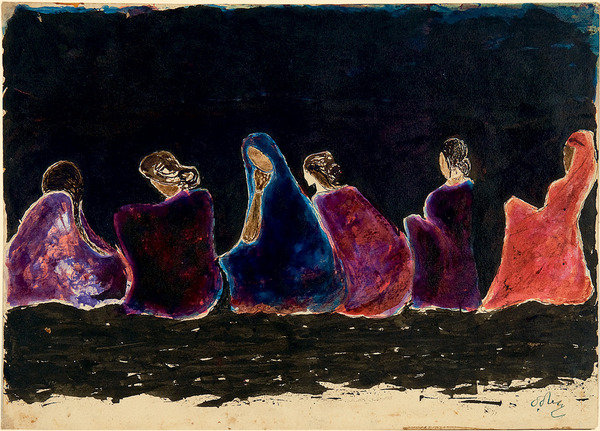 To celebrate the 150th anniversary of the birth of Rabindranath Tagore (1861-1941), the V&A will hold a display of about 50 of his paintings from the period 1928 to 1939, never before displayed outside India.

Tagore is best known as a poet and in 1913 was the first non-European writer to be awarded the Nobel Prize for Literature. Highly prolific, Tagore was also a composer and wrote the national anthems for both India and Bangladesh, as well as an educator, social reformer, philosopher and painter. In India, he is regarded as a national figure whose achievements are as important as those of Gandhi.

Tagore began painting relatively late in his career when he was in his sixties. Nevertheless he produced thousands of works and was the first Indian artist to exhibit his works across Europe, Russia and the United States in 1930. His painting style was very individual, characterised by simple bold forms and a rhythmic quality, and later served to inspire many modern Indian artists.

The works included in the exhibition are arranged around four themes of his oeuvre. His first paintings are highly imaginative works, usually focusing on animals or imaginary creatures, which are imbued with vitality and humour. Human figures are depicted either as individuals with expressive gestures or in groups in theatrical settings. In portraits produced during the 1930s, he renders the human face in a way reminiscent of a mask or persona. Landscape subjects represent the smallest output among Tagore’s works, and this display will include four of the finest of this group.

Animals / Composites
Rabindranath Tagore’s artistic adventure began with doodles that turned crossed-out words and lines into images that assumed expressive and sometimes grotesque forms. They were unplanned and shaped by accidents and intuitive decisions but often seem to carry memories of ‘primitive’ art objects he should have seen in books and museums. Something of this spilled into his early paintings. Many of them represent animals, but they are seldom of the real ones we know of; more often they represent what he has described as ‘a probable animal that had unaccountably missed its chance of existence’ or ‘a bird that only can soar in our dreams’. This led him to the creation of an antediluvian menagerie. Spurred by the same spirit of inventiveness he also took to cross projecting the movement of a living animal on to an imagined body, or a human gesture onto an animal body and vice versa. This exchange between the familiar and the unknown, the inhabitation of one in the other has led him to forms that are as expressive as they are inventive.

Landscapes
Although he was untrained as an artist and sometimes referred to his paintings as foundlings, painting also made Rabindranath more observant and sensitive to the visible world. More than ever before, he now saw it ‘as a vast procession of forms.’ This new engagement with the visible world found a definite expression in his landscapes, which in turn also linked up with one of his older passions. As a child confined to a large home and left to himself, Tagore spent a lot of his time observing nature through the windows. The world outside then gave him a sense of companionship and freedom, and later when he roamed the vast rural landscapes of Bengal he felt he was in contact with the infinite. It was also his lifelong practice to be up before sunrise and watch the world wrapped in the morning twilight. In these landscape paintings done at the evening of his life he more often shows nature bathed in the evening light; with radiant skies and forms coagulating into ominous silhouettes they invoke mystery and foreboding silence.

Gesticulating Figures / Dramatic Scenes
Rabindranath did not name his paintings, by leaving them untitled he tried to free them from literary imagination, and to free them from his own concerns as a writer. He also wanted the viewers to encounter his paintings with their own sensibility and fund of experience and read them in their light. Yet his rendering of the figures are informed by his experience of the theatre as a playwright, director and actor. Animated by gestures which do not suggest everyday activities even his individual figures have a dramatic presence, sometimes their costumes and the furniture and the objects that surround them play a role in this transformation of the ordinary into a dramatic motif. They do not move into narration but invoke narrative potentiality, especially when one figure is juxtaposed with another or when they are shown in groups. The wordless theatre they invoke does not mimic life. Movements and gestures in his paintings are usually more sombre than mime; they tease us into thinking and empathetic immersion rather than mere recognition.

Faces / Characters
The human face is an obvious constant in Rabindranath’s work. As a motif that persists right through his artistic career, it demonstrates his undiminished interest in human persona. Here again, as in his dramatic juxtaposition of figures, without turning literary his paintings show an overlap with one of his literary concerns and is enriched by it. As a writer, especially as a writer of short stories, he was used to linking human appearance with an inner human essence. When he took to painting he found a similar opportunity in the representation of the human face. In the beginning this usually led him to turn the face into a mask or a hieratic symbol of a social type, later as his representational skills and expressive assurance grew shadows of faces he encountered or remembered began to meld with the painted faces and give them the resonance and expansiveness of characters. His painted faces are varied in appearance and social stature but each one encapsulates within its small compass the lineaments of a vaster human experience.

About displays
Complementing our permanent collections, there are many free temporary displays around the V&A. They range in size from a single case to a room.

Further information can be obtained by contacting our Press Office at press.office@vam.ac.uk
For further Press information please contact Alice Evans or Elinor Hughes in the V&A press office on 020 7942
2508 / 2500 or email a.evans@vam.ac.uk / e.hughes@vam.ac.uk