Fudong's epic seven-screen installation, The Fifth Night. The majestic video work, created in 2010, is a dramatic black-and-white film reverie of old Shanghai, projected on seven large synchronised screens, spanning 21 meters in length. Facing seven cameras, actors' expressions in each shot are uncontrolled. The randomness presents a subtle as the viewer's experience of the space. 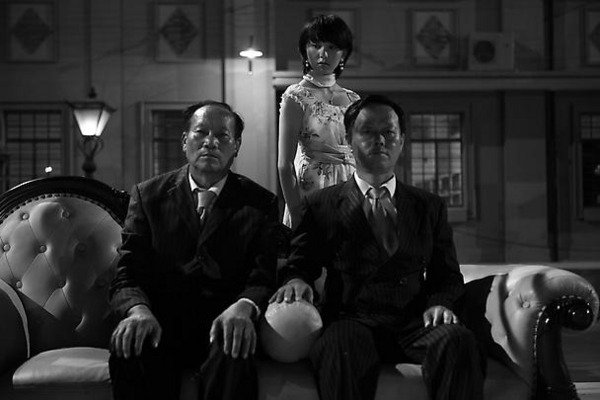 For the first time in Hong Kong, and as a pre-launch event to Spring’s autumn 2012 opening, Spring (Workshop) is proud to present The Fifth Night, by internationally-acclaimed artist Yang Fudong. The installation at Spring (3/F Remex Centre, 42 Wong Chuk Hang Road Hong Kong) is open to the public, free of charge, from Sunday, December 11, 2011 to Sunday, January 8, 2012. The Fifth Night is presented in partnership with Videotage and its One World Exposition.

The majestic video work, created in 2010, is a dramatic black-and-white film reverie of old Shanghai, projected on seven large synchronised screens, spanning 21 meters in length. The Fifth Night emerged from the artist’s reflection on film production, resulting in his use of a new multiple-camera method for creating a video installation that Yang Fudong calls "multiple-views file." Facing seven cameras, actors' expressions in each shot are uncontrolled. The randomness presents a subtle and unpredictable aesthetic; the piece is as much about the videos as the viewer’s experience of the space.

The artist Yang Fudong and curator Li Zhenhua will attend the brunch.

Yang Fudong (b. 1971, Beijing) is among the most successful and influential Chinese artists of his generation. His works are filled with psychological and existential questions. Stylistically, Yang’s videos, which are originally shot on 35mm film, recall both the black-and-white pre-war films of the 1930s and 1940s and post-war avant-garde film noir. Yet, any perceivable references to past film traditions seem to be largely subconscious on the part of the artist, and stem from his love of film. Yang has participated in prestigious international art events including the 52nd Venice Biennale (2007). He has had solo shows at acclaimed institutions and galleries such as the Stedelijk Museum (Amsterdam, 2005), Parasol Unit (London, 2006) and Marian Goodman Gallery (New York, 2009). Yang lives and works in Shanghai.

In the autumn of 2012, Spring will open as a non-profit arts space committed to an international cross-disciplinary program of artist and curatorial residencies, exhibitions, music, film and talks. Anchored in the Wong Chuk Hang industrial neighborhood of Hong Kong, Spring will serve as a platform and laboratory for exchange between the vibrant artists and organizations that define Hong Kong's rich cultural landscape and the emerging and established artists and organizations around the world that seek to engage in far-reaching dialogue. www.springworkshop.org

About One World Exposition:

It is the first substantial project that aims to explore the development of Chinese media art from regional, national and global perspectives. Through a series of exhibitions, screenings, performances, artist talks and symposia, this project hopes to enrich the public’s understanding of contemporary Chinese media artists and their works from different context and cultural backgrounds, and hopefully bridge artistic and cultural exchange between regions and across time. www.oneworldexposition.org

Ahead of the preview, organizers will host a private Press and Art Professionals
Brunch at Spring on December 11, from 10:30 am to 12:00 noon (please RSVP by December 6 to ada@springworkshop.org).

For other queries, high-resolution images or to arrange an interview with Yang Fudong or Li Zhenhua, please contact:
Ms. Ada Lam on +852 9219 0921 or ada@springworkshop.org