Nordstrom's political and social commitment is reflected in works that depict our environment and mankind's impact on it; whilst these works are not as direct in their criticism as those in which he depicts war and cruelty, they take a clear stand against the environmental destruction and wastefulness that threaten our natural world. The best-known graphic work of Spanish artist Francisco Goya (1746-1828) is Los Desastres de la Guerra, which consists of 80 etchings. Produced between 1810 and 1820, the series contains gruesome illustrations of the Spanish struggle for independence. 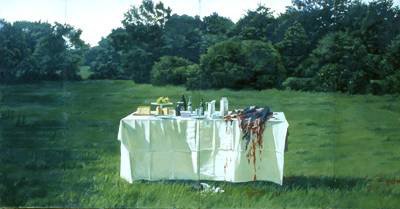 Born in 1925, Gerhard Nordström has taken a clear stand for much of his career against the abuse of power and the destruction of the environment. In his art he depicts in a direct and unavoidable way social injustices and the consequences of consumer society. He made his big public breakthrough in the early 1970s with a suite of paintings entitled Sommaren 1970 (The Summer of 1970), which are now regarded as some of the most important examples of 20th-century Swedish art.

Nordström began his artistic career at a young age. As a fourteen-year-old he became a student, at Skånska Målarskolan in Malmö. Three years later he was accepted into the Royal Swedish Academy of Fine Arts in Stockholm, where he studied for several separate periods of time during the years 1943 to 1949. At the student exhibitions he was noticed and appreciated by critics, who regarded him as a young and talented painter. Despite his successes with painting, it was graphics that came to play a central role for Nordström during the 1950s and ’60s. The 1950s’ experiments with colour and form led him to eventually regard painting as empty stylising, with too narrow a focus on geometry and abstraction. His belief that painting was an insufficient form of expression caused him to experience an artistic crisis.

Graphics became the turning point Nordström needed to progress in his artistry by offering him a freer relationship with art. Instead of focusing on the set of problems associated with the act of painting, he could concentrate on the black-and-white colour scheme and the possibilities it offered for creating form and volume. During the 1950s, his graphic works featured a Cubist style, which gradually became more and more abstract. In the 1960s, the political message became increasingly prominent in his graphic works, and the contents became more important than the form. With pictures like Hjälten (The Hero), Maktspelet (The Power Game), Konsumentupplysning (Consumer Information), and Kunskapens frukt (The Fruits of Knowledge), Nordström depicts the brutal and meaningless aspects of military ideals and war. He does so as directly and plainly as Francisco Goya did 200 years earlier in his graphic works Los Desastres de la Guerra (The Disasters of War).

At the end of the 1960s, at the same time as he was working as a graphic artist, Nordström also began to use painting as a way to criticise war and its futility. To do this, he created anti-militaristic “wall charts”, whose clear, pedagogical imagery resembles that of the wall charts formerly used in schools. In his paintings he linked images with texts, such as quotations from military instruction manuals, to make his message even clearer. In this way he succeeded in conveying the total absurdity and inhumanity of all forms of warfare.

Nordström’s anti-militaristic message recurs even more strongly in his suite of paintings entitled Sommaren 1970. Moved by images from the American Life magazine’s reportage on the Vietnam War and the Song My massacre in 1968, he decided to depict such ruthless violence in a way Swedes had not previously experienced. War and its terrible consequences have never been so present to us as in these paintings, set in an environment we recognise. At the heart of the idyllic Swedish summer landscape we see mutilated bodies, dead women and children – the result of completely incomprehensible cruelty and violence.

Nordström’s political and social commitment is also reflected in works that depict our environment and mankind’s impact on it. Whilst these works are not as direct in their criticism as those in which he depicts war and cruelty, they take a clear stand against the environmental destruction and wastefulness that threaten our natural world. These works include a series of paintings in which he depicts one of the most crucial prerequisites for our survival – the soil.

The best-known graphic work of Spanish artist Francisco Goya (1746–1828) is Los Desastres de la Guerra, known in English as The Disasters of War. Its message remains just as relevant today. Goya’s etchings depict for the first time war from the viewpoint of the civilian population’s suffering, without any attempt to soften the impact. We are ruthlessly presented with the brutality of war and the inhumanity of mankind. The etchings are an intense visual report of a barbaric behaviour that has since been repeated and is still continuing around the world today.

Goya began working for the Spanish royal court painting cartoons* for tapestries, before gradually becoming the official court painter. Concurrently with his career as a portrait painter, he did a number of commissions for the Catholic Church in Spain. After suffering a severe illness that confined him to his bed and left him deaf, Goya changed his work method in about 1793. He continued to do commissions but also began working on his own choice of subject matter. In these latter works he expressed his own thoughts and ideas, and his style became freer and more expressive. In 1824 he moved to France for political reasons and died four years later at the age of 82.

These more personal works by Goya include the graphic series The Disasters of War, which consists of 80 [82] etchings. Produced between 1810 and 1820, the series contains gruesome illustrations of the Spanish struggle for independence. The French army had invaded Spain in 1808 and Napoleon had placed his brother on the Spanish throne. This led to an uprising in Madrid and sparked off Spain’s war of liberation (part of the Peninsular War), during which guerrilla-like methods were used up until 1814.

The Disasters of War was first published in 1863, 35 years after Goya’s death. This delay was probably because Goya himself did not dare to publish such images – which would have been political dynamite at that time – for fear of the consequences. The pictures can be divided into three main topics: events from the war (nos. 1–47), the famine in Madrid during Napoleon’s siege of the city (nos. 48–64), and critical comments on the political situation in Spain (nos. 65–80).

The wartime events are depicted with a powerful realism and a mercilessness that are hard to protect oneself against. The impact is reinforced by the short comments engraved beside the pictures, such as “It’s impossible to look at this” or “This is too much!” It is thought that these comments are based directly on Goya’s own notes. He presumably witnessed many of the horrendous scenes that he depicts or heard about them from friends and acquaintances.

The famine in Madrid from 1811 to 1812, which in Spanish is usually called “Año del Hambre”, the year of hunger, took more than 20,000 human lives. Madrid’s civilian population suffered terribly during Napoleon’s long siege of the city. Goya’s strongly drawn moments in time give hunger a face. Their focal point is always on the individual rather than on the historical course of events. We encounter emaciated people, both alive and dead.

The last etchings in the series focus on the situation in Spain immediately after the war, and are a devastating criticism of the subsequent power struggle between the country’s new rulers and the Church. In his satire, Goya uses various allegorical scenes and addresses topics such as the Inquisition and the use of torture.

The black-and-white graphic style suited Goya and he was a master at building up an image by using sharp contour lines combined with the chiaroscuro technique used in painting. He is said to have stated: “in art no colour is needed, I just see light and shadow.” Goya always based his copper plates on drawings, and a number of the original drawings for The Disasters of War are extant. Often, as in The Disasters of War, he combined various graphic techniques such as line etching, aquatint and engraving.

Over the years many artists have been influenced and inspired by The Disasters of War. One of them is Gerhard Nordström, whose works can be experienced at the same time at Malmö Konsthall in a major retrospective.