The Power of Doubt

The exhibition superposes site-specific installations and existing works -in various media but relating to photography as a model of perception- that embody the necessity of doubting the 'mainstream' way of seeing, recording and communicating the real world, which, once again, oscillating between spectacular 'truths' and dramatic fictions. 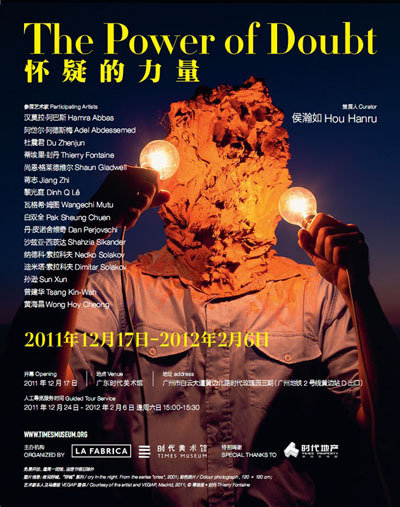 Our era is the one dominated, shaped and determined by digital technologies. Our existences and identities are continuously transformed and redefined by interfaces in the form of flux of digitalised images and texts. These interfaces are oscillating between facts and fictions. They construct the contemporary substance of reality and truth.

Art and artists today, like the world itself, are largely “globalised”. Digital media – from still and moving images to the internet – are both the resources and materials for artistic production. Artists continue to confront, embrace and inquire the nature of reality, truth and dreams. But the processes are unprecedentedly fluid, uncertain and precarious while the outcomes are generating more suspense, doubt and critique than conclusion and resolution.
This is a seemingly open and liberated globalised world that, in turn, violently imposes fictions of happiness and peace through flattening the reality into an interface that compress every human activity into act of communication of a single truth. Behind the “freedom” of expression and communication provided by Google, Facebook, Youtube and iPhone, etc., in the field of economy, we can only accept to survive in a neo-liberalism system while politically we are encouraged to embrace the hegemony of a kind of “democracy” dictated by the logic of global imperialism. This is particularly articulated in locations that are experiencing social transformations.

The Power of Doubt superposes site-specific installations and existing works – in various new and old media but relating to photography as a model of perception – that embody the necessity of doubting the “mainstream” way of seeing, recording and communicating the real world, which, once again, oscillating between spectacular “truths” and dramatic fictions. Most of the artists are from countries such as China, Eastern Europe, that experience drastic changes from communism to capitalism and South East Asia, Africa, who are constantly negotiating between post-colonial memory and geopolitical conflicts , searching solution to deconstruct the double-bind status quo blocked into post-colonial and neo-liberal systems. They are also highly individualised and singular voices that cry out the collective doubts and desires of their societies while expressing highly different and diversified interests in artistic and intellectual pursuits.
It’s the hybridity and multiplicity produced by the encounter, dialogue and debates within this multitude – which represent most intensely the formation of a new global multitude of people who refuse to trust the imposed truth of the dominant system and struggle to achieve an emancipated truth – that will form a fantastic space of meeting with the public and extend invitations to their participation in the process of struggle. Here, we’ll all share the very power of doubt!

Times Museum, formerly known as Times Branch of the Guangdong Museum of Art, was funded by the Times Property in 2003. In 2005, during the D-Lab project in the 2nd Guangzhou Triennial, the Times Property decided to invite Rem Koolhaas and Alain Fouraux to work together towards designing a permanent museum. The Museum was completed and put into use in October, 2010, later became known officially as Times Museum. It is registered with the Guangdong Administration Bureau of Civil Organizations as a non-governmental organization, which is under the category of non-profit institution.