The Paper Trail. The various pieces took shape in spring 2010, a time when the artist was researching the unique network of authors, characters, magazines, bookshops, publishers, leaders and censors that make up the social history of comic books in Egypt, as well as the world of print media, which let him explore the country's complex political and religious sides in depth. 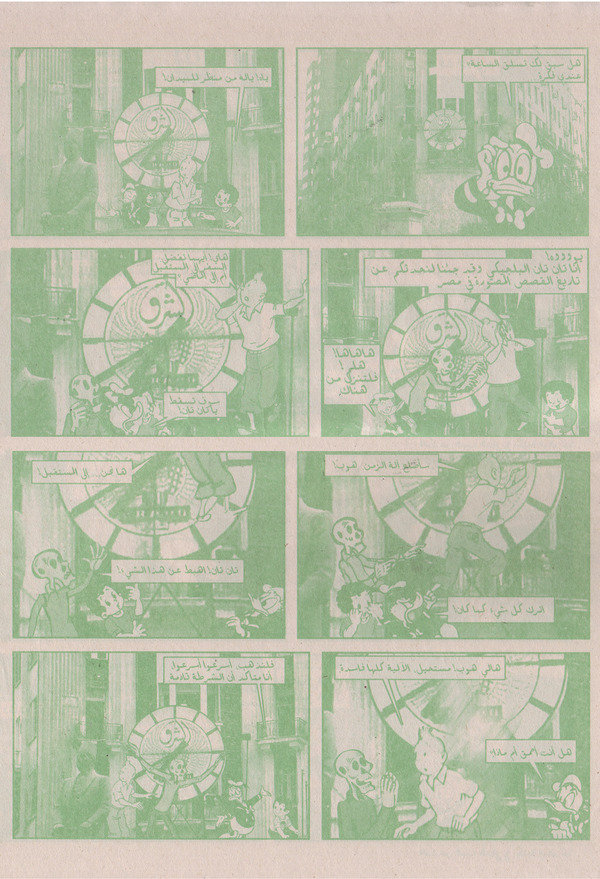 Fundació Suñol’s Nivell Zero presents ACTE 21: Francesc Ruiz, The Paper Trail, an installation originally presented at the Contemporary Image Collective in Cairo on 15 October 2010. The various pieces took shape in spring 2010, a time when the artist was researching the unique network of authors, characters, magazines, bookshops, publishers, leaders and censors that make up the social history of comic books in Egypt, as well as the world of print media, which let him explore the country’s complex political and religious sides in depth.

Within this fairly clearly defined research setting he was able to record the changes that were already taking place in the subjective perspectives of the reporters and other people he talked to and worked with, as well as events such as the extension of the emergency law, the police brutality against Khaled Saeed and the widespread corruption, amongst many others, followed by the domino effect sparked by the protests in Tunisia, which led to the popular uprising on 25 January 2011. The pieces presented here can be read as a portrait of prerevolutionary Cairo and, to a certain extent, offer thoughts on both the past and future of the country.

The Green Detour is a multiple-issue comic book that acts as a crossover between the Cairo adventures of four of the main characters in the history of Egyptian comics: Tintin, Donald Duck, Samir and the Crushed Citizen. These characters also symbolise key moments in the history of the country and the city of Cairo: Tintin represents its colonial past; Donald Duck, the United States’ presence and control of the region; Samir, Nassar’s 1952 revolution; and the Crushed Citizen, who appeared in the late 1980s in Flash! comic, a starving civil servant in a country where the revolution appears to have failed.

Each issue was distributed at a different point and readers were guided from one place to the next by the story in the comic itself, following in the characters’ footsteps through some of the key locations for potentially telling a story of Egyptian comics.

Cairo Newsstand reproduces one of the typical kiosks found on pavements across the city. A community of paperweights seems to have taken over this space and is using speech bubbles to voice their opinions on the city, life in the newsstand and the news around them, with comments ranging from folklore to political allegory: “Both money and newspapers are made of paper”, “The earth trembles every time someone buys a newspaper”, “Oh, my love, I’d like to marry you and go and live in a faraway newsstand”, neatly subverting the general journalistic tone of ever-present propaganda and censorship.

The First Comic Shop in Egypt, is ultimately a reflection on what was to be the first specialist comic shop ever in Egypt, a project that came up against many hurdles and wasn’t actually able to be carried out.

Francesc Ruiz (Barcelona, 1971) is a plastic artist. Since the 1990s his work has centred on drawing and he now uses comics as an expanded medium. By applying a series of strategies from conceptual art and situationism traditions, he creates installations and interventions linked to specific contexts. His latest solo exhibitions include The Yaois (Galeria Estrany - de la Mota, Barcelona, 2011), 100 i més (etHall, Barcelona, 2011), Gasworks Yaoi (Gasworks, London, 2010), The Paper Trail (Contemporary Image Collective, Cairo, 2010) and Big Boom (Centre d’Art La Panera, Lleida, 2008).