Date Painting(s) in New York and 136 Other Cities. The exhibition features over 150 works selected by the artist, comprising a seminal presentation of his renowned date paintings from 1966 to the present (known collectively as the Today series). 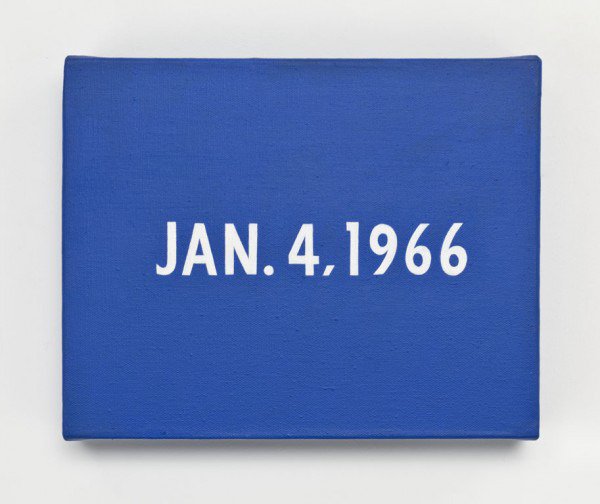 David Zwirner is pleased to present the exhibition On Kawara: Date Painting(s) in New York and 136 Other Cities, on view at the gallery’s 525 and 533 West 19th Street spaces. The exhibition will feature over 150 works selected by the artist, comprising a seminal presentation of his renowned date paintings from 1966 to the present (known collectively as the Today series).

Spanning both of the gallery’s exhibition spaces at 525 and 533 West 19th Street, the exhibition will address the temporal and geographical scope of the artist’s continuing practice, which is characterized by its meditative approach to concepts of time, space, and consciousness. Date paintings from each year since the inception of the Today series will be brought together in an expansive, evocative installation: a comprehensive selection of works painted in New York will be displayed in one gallery, while the second exhibition space will be devoted to the presentation of works painted in almost all other cities ever visited by the artist. For over four decades, On Kawara has created paintings, drawings, books, and recordings that examine chronological time and its function as a measure of human existence.

The artist began making his now signature date paintings in 1966 in New York City, and continues to make them in different parts of the world. Following the same basic procedure and format, each of these works is carefully executed by hand with the date documented in the language and grammatical conventions of the country in which it is made (Esperanto is used when the first language of a given country does not use the Roman alphabet). The artist has created a version of the sans serif typeface, which he uses to meticulously paint the letters and numbers in white on a monochrome surface. Each painting, when not on display, is encased in a cardboard box handmade by the artist. On certain days, a newspaper clipping from the city in which the painting is executed is selected and used to line the interior of the box.

The particular syntax with which any given date is recorded evokes specific locations and subtly reflects the regional differences that exist despite the universality of time. With works on display from over a hundred cities in more than thirty countries, the grammar of the paintings emerges as a code to be deciphered. The global dimension of the Today series is further evidenced by the local newspapers accompanying many of the works, whose headlines add to the virtually endless events encompassed by the given date recorded by Kawara (presentation binders with facsimiles of the newspapers clippings will be accessible for visitors to read).

New York occupies a central importance within the Today series as the city where the first date painting was made (JAN. 4, 1966) and where the majority of the works have been executed. It also marks the location of three significant paintings produced on the days surrounding the first manned moon landing in July 1969 (JULY 16, 1969; JULY 20, 1969; and JULY 21, 1969); each presents the largest canvas size Kawara has used for the date paintings (61 x 89 inches). The actual newspaper clippings accompanying these works are exhibited alongside the paintings and offer a narrative component, with the headline of one reading “MAN WALKS ON MOON.”

Also on view will be one-hundred-year calendars: one from the twentieth century and another from the twenty- first. Starting with the date of his birth, Kawara systematically marks each day of his life with a yellow dot on the calendars, and registers a completed date painting with a green dot (red dots signify that more than one painting was completed on that given day).

Japanese writer Lei Yamabe notes in the catalogue accompanying the exhibition that each date painting “is like a letter whose delivery has been delayed, or one might say that each work resembles a star.” Conversely, for each day in which a date painting is not produced, “Kawara is shut in the closed room of time, simultaneously alive and dead...[T]he flickering between life and death, existence and non-existence, is transferred intact to the entire Today series made up of date paintings. This is because the series will be complete when Kawara’s body ceases to exist—when superposition finally collapses completely and Kawara has entered the irreversible phase of ‘death.’ Or conversely, because until that moment the series itself is a superposition of existence and non-existence.”1 On Kawara: Date Painting(s) in New York and 136 Other Cities will be accompanied by an eponymous, fully illustrated catalogue published by Ludion. Since 1999, Kawara’s work has been represented by David Zwirner, and On Kawara: Date Painting(s) in New York and 136 Other Cities marks his fifth solo exhibition at the gallery. On Kawara is a prominent figure in contemporary art, and his work has been included in numerous conceptual art surveys from the seminal Information show at The Museum of Modern Art, New York, in 1970 to 1965-1975: Reconsidering the Object of Art at the Museum of Contemporary Art, Los Angeles, in 1995-96. The artist’s work has been the subject of recent solo exhibitions at prominent institutions worldwide, including the Dallas Museum of Art in 2008. On Kawara: Consciousness. Meditation. Watcher on the Hills was a major solo exhibition, which traveled to a dozen international venues between 2002 and 2006, including the Ikon Gallery, Birmingham, England; Le Consortium, Dijon, France; Kunstverein Braunschweig, Germany; Institute of Contemporary Arts, Singapore; and The Power Plant, Toronto. A long-term installation of the artist’s date paintings is currently on view at Dia:Beacon in Beacon, New York.

1 Lei Yamabe, “On Kawara’s Quantum Gravitational Body, or the Confinement of Space-Time and the Liberation of Consciousness,” in On Kawara: Date Painting(s) in New York and 136 Other Cities. Exh. cat. (Antwerp: Ludion, 2012).