In each artist's work, the amount of control the artists take in tilting the narrative to their respective ends varies from the eloquently subtle to the dramatically directed. 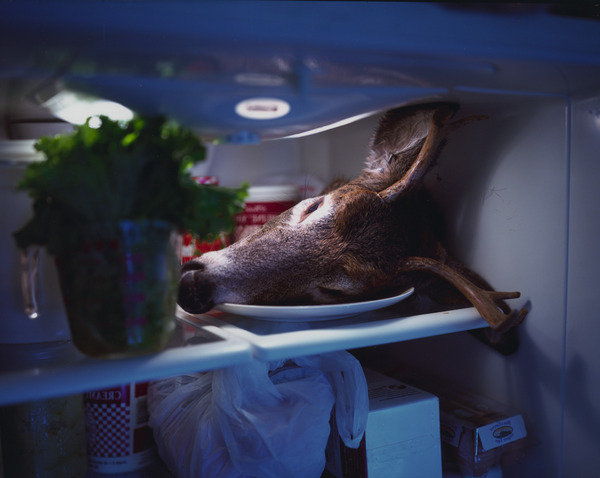 “The fact (is) that photographs — they’re mute, they don’t have any narrative ability at all. You know what something looks like, but you don’t know what’s happening… (It’s) a piece of time and space (that) is well described. But not what is happening. I think that there isn’t a photograph in the world that has any narrative ability. Any of ‘em. They do not tell stories - they show you what something looks like… It’s a picture problem. It’s part of what makes things interesting.”–Garry Winogrand

Garry Winogrand’s picture problem of how to create a complex meaning (in his case narrative) in a silent and still medium is at the heart of the art-making process, that is, turning the materials of the world into something that makes a point in a compelling manner. All the artists in Narrative Ability address this visual problem by creating seductive visual cues that establish the tenor, characters and setting of their art, in hopes of enticing the viewer into providing a solution or a story that reflects both the artist’s intention and the viewer’s desires and prejudices.

In each artist’s work, the amount of control the artists take in tilting the narrative to their respective ends varies from the eloquently subtle to the dramatically directed. Joe Lawton’s pictures skillfully establish a setting that allows the viewer to form a narrative based on the slight gestures and passing glances of a cast of unknowing strangers. Where Lawton’s dense tableaux exist only in fractions of seconds of real time, Ted Partin’s pictures appear to be taking place in infinity. The subjects seem to be seduced into laying themselves bare in the face of the camera’s never-ending glance. The pictures result in an instantaneous emotional charge created by an unseen back story built on the small details that result from staring at a person, the subtle twitches in the face, the wear on the clothes, and the nature of their settings.

While Lawton and Partin’s pictures are open narratives, Linda Gallagher takes a more abstract approach, creating her meaning from a series of visual associations among evocative objects like high heels, handbags, and penises. As unexplained as the objects are in their empty visual space, the images are so laden with content it is hard not to have a gut response to the work, a response that suggests a subconscious connection between shopping and sex that most of us wouldn’t necessarily like to acknowledge.

Amber Hawk Swanson’s project encapsulates an open narrative while taking an overt role in crafting the viewer’s experience of her work. She pairs silent and shocking images of a mangled RealDoll (a life-size silicone sex doll) of herself with a long, dense video in which she sternly reads the often over-the-top comments of an online thread about her art practice. The pictures paired with the video result in a piece of art that defies obvious explanation but provides an overly-detailed, almost academic investigation of their existence.

Narrative Ability is rounded out by the playfully agile paintings of Ryan Syrell in which he takes the most familiar of childhood motifs and sets them to the adult task of making art where cartoon turtles compete for conceptual rigor with Jessica Stockholder’s sculptural ideas. While Road Runner-less western landscapes await either the coming calamity of the chase or the peaceful moments after the childish attacks of a cartoon coyote have passed, allowing us to sit and simply enjoy how nice the cliffs look.