Inherent in each artist's practice is an exploitation of a tension between 'high' and 'low' - using ostensibly low, crude materials and techniques in the service of formally elegant and restrained results, or just the opposite, constructing a superficial elegance to hide a subversively radical gesture. Indicative of each artist's open-ended practice, the works in this show self-reflexively question their own making, taking their process as subject, while pursuing a layered social and cultural critique. 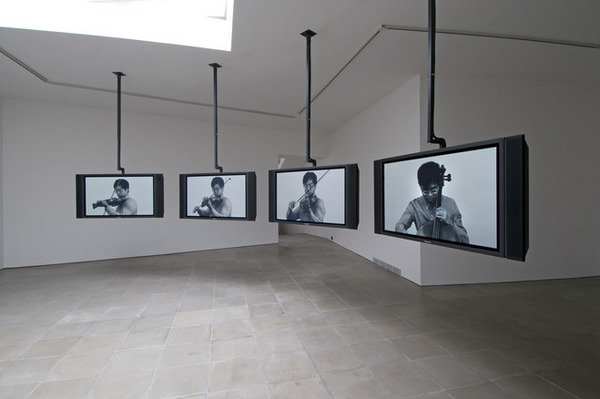 Marian Goodman Gallery Paris is pleased to announce a group exhibition titled “The devil’s fidelity”, which includes an international group of artists that have never before shown with the gallery, many of whom are making their Paris debuts. The title of the exhibition is appropriated from a poem by Emily Dickinson (“THE DEVIL, had he fidelity…”) which describes the hopeless duality and pliability of truth, and the pitfalls of faith in appearances.

While these artists represent a full range of distinct work in video, photography, sculpture and painting, they nevertheless occasionally unite and collide around certain common threads. Inherent in each artist’s practice is an exploitation of a tension between ‘high’ and ‘low’ — using ostensibly low, crude materials and techniques in the service of formally elegant and restrained results, or just the opposite, constructing a superficial elegance to hide a subversively radical gesture. Indicative of each artist’s open-ended practice, the works in this show self-reflexively question their own making, taking their process as subject, while pursuing a layered social and cultural critique.

Nina Canell (b. 1979) is based in Berlin. Her sculptural installations have the appearance of experimental apparati, testing the transitory nature of both the measurable (electricity, water) and the immeasurable (consciousness) in an open-ended research into ephemeral phenomenon and historical and cultural subjects.

“Her objects can be seen to apply their own logic of radiation in which electromagnetic shifts often act as deliberate happenings whether channeled through an array of crude conductors… or discretely bypassing human perception all together. A kind of hidden affection seems to be at work, connecting human consciousness to objects and phenomena in an almost prosaic manner. The electromagnetic nature of thinking itself is a spry component in Canell’s work… a position that places sculptural emphasis on conductive relations, shifting attention from its material aspect to that which is embedded or activated by a stream of occurrences.”

Nina Canell has been the subject of recent one-artist exhibitions at the Fridericianum, Kassel; Mumok, Vienna; Kunstverein Hamburg; Neuer Aachener Kunstverein and the Douglas Hyde Gallery, Dublin. In 2012, she will participate in the Paris Triennale (Intense Proximity) and in the Sydney Biennale.

Matias Faldbakken (b. 1973) is an artist and writer living and working in Oslo. In addition to publishing several novels, his artistic practice incorporates sculpture, installations, film and photographic interventions that employ an abstract aesthetic rooted in potentially violent and destructive gestures of negation. Faldbakken transmutes vandalism and violence, with a dose of humor, into formally seductive objects that belie their anarchic nature, created to counteract the banalities of pop culture, media and commerce.

“Both my art and my writing is fueled by the idea (and practice) of the negative as a driving force…On the art field my work mainly consists of an investigation into ’spectacular negation’ — and could be described as negativism visualized.”

Matias Faldbakken has recently had exhibitions at the Fridericianum, Kassel; The IKON Gallery, Birmingham, UK; Kunsthalle, St. Gallen; The Power Station, Dallas; and the Nordic Pavillion for the Venice Biennale in 2005.

Cyprien Gaillard (b. 1980) lives and works in Berlin, Paris and Los Angeles, where he is currently on a residency with the UCLA Hammer Museum. He makes photographs, sculptures, videos and performances that situate his unique practice somewhere between anthropology, archeology, land art, architecture and minimalism. For a recent project in Berlin, Gaillard constructed an entire ziggurat from imported Turkish beer. At the opening the audience was invited to climb the sculpture, open the boxes and drink the beer. The very experience of the work included its own destruction, and consumption, paralleling less metaphoric destruction of historic structures all over the world.

“I’m interested in things failing, in the beauty of failure, and the fall in general”

Cyprien Gaillard has been the subject of recent one-artist exhibitions at the Centre Pompidou, Paris (Prix Marcel Duchamp 2010); The KW Institute for Contemporary Art, Berlin; the Kunsthalle Basel.

Tim Lee (b. 1975) is based in Vancouver, and makes video, photographs and sculptures that allow him to inhabit, layer and recreate seminal moments in history, art, music and pop culture. This exhibition will include a 4-channel video installation called “String Quartet, Opus 1, Glenn Gould, 1955” (2010). The four monitors present a recording of the artist playing all four instruments in a recital of Glenn Gould’s only original composition. The work is, however, an elaborate fabrication. Tim Lee is a novice with the instruments, it is only through complex editing that he constructs the ruse of possessing the gifts required to actually play the work.

Mai-Thu Perret (b. 1976) lives and works in Geneva, exploring utopian societies, the history of the avant-garde and feminism through a complex practice incorporating sculpture, painting, installation and performance. In 1999 Perret began developing an extensive body of work about an imaginary community of separatist feminists living in New Mexico (USA). Perret’s written texts, sculptures, paintings, ceramics and performances are the erstwhile production of this community.

Mai-Thu Perret has recently had one-artist exhibitions at Mamco, Geneva; Aargauer Kunsthalle, Aarau; Aspen Art Museum and San Francisco Museum of Modern Art. She was also included in the 54th Venice Biennale, curated by Bice Curriger, and the ”Dancing through life” exhibition currently on view at the Centre Pompidou.

Mark Soo (b. 1977) lives and works in Berlin, and makes films, photographs, sculptures and installations that combine investigations into seemingly unrelated paradigmatic moments in cultural history, industry and music. A recent two-screen video projection juxtaposes a 19th century Louisianan steam boat with Detroit techno music, contemplating the shift from steam to combustion engines, and the rise of the industrial age. Similarly, Soo’s work in photography engages the historical shifts in the medium itself. A new series of photographs, exhibited here, have been made combining traditional techniques of printing from an exposed negative, photogram and digital photography.

Mark Soo has been the subject of recent solo shows at The Western Front, Seattle; Galerie Johann König, Berlin and museum group shows at the Vancouver Art Gallery; The CCA Wattis, San Francisco; The Nasher Museum of Art; MuKHA, Antwerp.