An Italian immigrant who moved to Los Angeles in the 1970s, Cesaretti quickly became fascinated by East Los Angeles. Inspired by the colors, people and graffiti that populated the East Side, he began to capture the vulnerability and uncensored quality of this area. 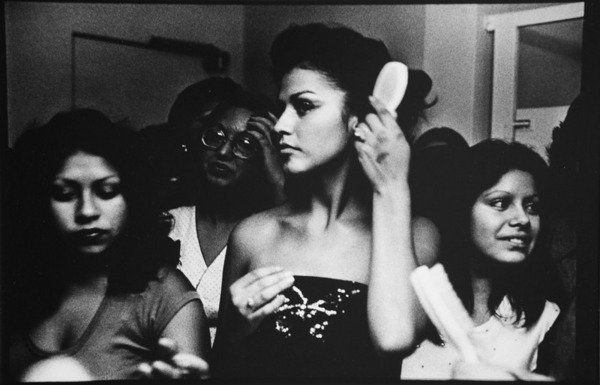 Roberts & Tilton is pleased to announce an exhibition presenting new and vintage photographs by Gusmano Cesaretti, curated by Aaron Rose.

The main gallery will feature work from the early period of Cesaretti’s career (1970s) in which he immersed himself in the East Los Angeles culture. His photographs of this era celebrated a sub-culture that had rarely been captured before. The exhibition will include twenty-four vintage, unique prints that have recently been discovered and will be shown for the first time in Los Angeles.

An Italian immigrant who moved to Los Angeles in the 1970s, Cesaretti quickly became fascinated by East Los Angeles. Inspired by the colors, people and graffiti that populated the East Side, he began to capture the vulnerability and uncensored quality of this area. Always honest when shooting his subjects, Cesaretti presents them as they are: violent, loving, confident, scared, full of life. It is this energy and conflict inherent in those who occupy the edges of society that drives his photographic investigations.

In the Project Space at Roberts & Tilton, Cesaretti visits a turbulent section of Colón, Panama. Approached with the same spirit and tenacity reflected in his previous works, these recent intimate photographs of children in an impoverished community offer a fresh perspective into this part of the world. Cesaretti, an outsider himself, became personally connected with the subjects he was shooting. The intimacy existing in the photographs is a result of the relationships that Cesaretti built with his subjects over time. Never forcing a situation, Cesaretti addresses his subjects with great concern and patience, allowing for an essential level of trust to be established. The resulting openness between Cesaretti and his subjects permeates the work, allowing the viewer access to a world that would otherwise be guarded against outsiders.

Gusmano Cesaretti was born in 1946 in Lucca, Italy and currently resides in Los Angeles, CA. Cesaretti has published two books: Street Writers – A Guided Tour of Chicano Graffiti, and Physical Graffiti-4x4=24. His photographs have been exhibited at the Los Angeles County Museum of Art and the San Francisco Museum of Modern Art. Recent exhibitions include Art in the Streets, at the Museum of Contemporary Art (Los Angeles, CA), and This Side of Paradise: Body and Landscape in Los Angeles Photographs, at The Huntington Library (San Marino, CA). His photographs are in the permanent collection at the Smithsonian Institute (Washington D.C.) and the Museum of Contemporary Art (Los Angeles, CA).

Roberts & Tilton is a Participating Gallery of Pacific Standard Time. This unprecedented collaboration, initiated by the Getty, brings together more than sixty cultural institutions from across Southern California to tell the story of the birth of the L.A. art scene.