"Requiem for the XX century. Self-Portraits in Motion". This solo exhibition showcases moving image and photographic works from the artists' Requiem series which recently toured museums in Japan. 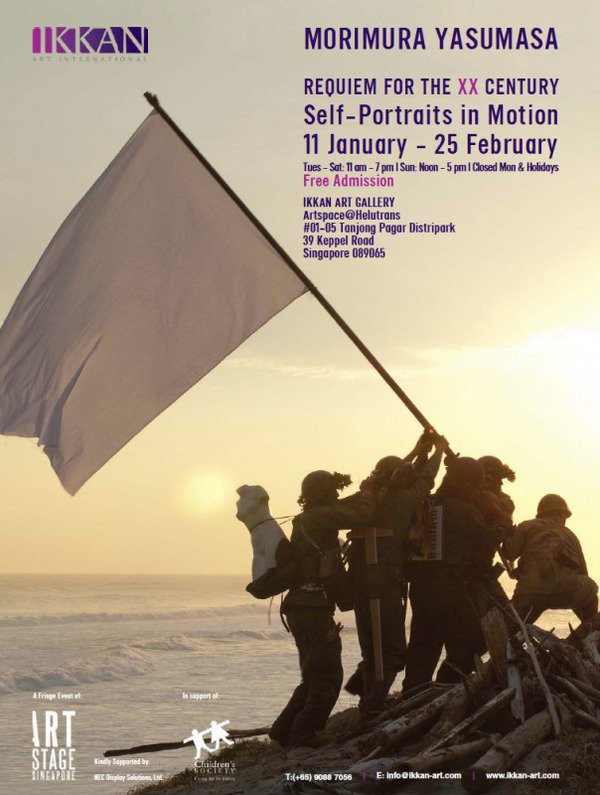 Ikkan Art International is honored to present the exhibition "Morimura Yasumasa: Requiem for the XX Century – Self-Portraits in Motion."

Morimura Yasumasa, born in 1951 in Osaka, Japan, is an internationally renowned appropriation artist. Through the extensive use of props, costumes and make-up, Morimura masterfully transforms himself into recognizable icons and subjects that punctuate the Western cultural canon. His unsettling deconstruction of iconic images challenges the assumptions already placed on such works/images while commenting on Japan's complex and conflicting absorption of Western culture. His ability to satirize and simultaneously create homage of his source material is what makes Morimura's work particularly forceful and effective.

Morimura's latest series, the Requiem, has recently been shown in multiple museums and galleries in Europe, U.S.A. and Japan and this exhibition marks his first solo exhibition in Singapore. Based on the theme of 'the men of the twentieth century' the Requiem series considers the history and significance of the construction, war and destruction that symbolized this period and attempts to answer the question; what was the twentieth century?

A requiem is a religious service for the repose of the souls of the dead. The object of these works is to look at the era of men that has now passed, to offer respect to its ideologies, and to verify the meaning of forgotten memories in order to pass them on to the twenty-first century.

In addition to his usual still photography, Morimura's recent works and the focus of this exhibition are the video works of his performances. Ikkan Art Gallery has been transformed into several mini movie theatres where audience can enjoy the room-size projected video works, Morimura's self-portraits in motion.

He was nominated for the Hugo Boss Prize in 1996. In November 2011, he received a medal from the Japanese Government for his achievements in arts – "The Medal of The Purple Ribbon"