Rumble presents a series of works investigating the roles of aggression, humor, art, neurosis, alternative languages and invisible codes in the ways identity attains shape within a larger cultural context. Among works on view, visitors will find what the artist describes as 'a creole puddle' of disparate influences drawn from high and low culture. 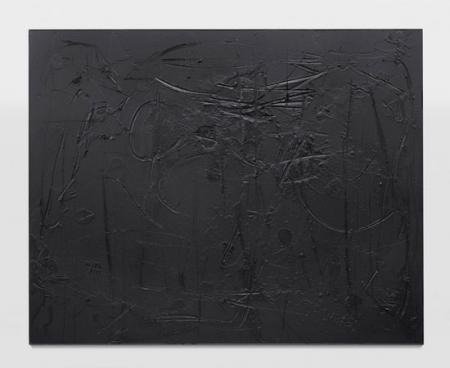 Beginning January 11, 2012, Hauser & Wirth New York will present 'RUMBLE', an exhibition of new works by artist Rashid Johnson (b. 1977, Chicago). Including painting, sculpture, installation and film, 'RUMBLE' will be the artist's first show with the gallery and a prelude to his upcoming major exhibition 'A Message To Our Folks,' opening in April at the Museum of Contemporary Art in Chicago.

Johnson's point of departure for 'RUMBLE' is the flamboyant African-American prizefight promoter Don King, who previously owned the Upper East Side townhouse now occupied by Hauser & Wirth New York. The show's title refers to King's most infamous spectacle, the legendary 1974 'Rumble in the Jungle' that matched Muhammad Ali against George Foreman in Zaire for the world heavyweight championship and served as a flashpoint for identity politics in the 1970s. At a moment when blacks across the United States were reclaiming their relationship to Africa and celebrating the triumph of Ali - a conscientious objector and advocate for black nationalism - as a major victory for civil rights, Don King's gleeful American boosterism was an anathema.

Waving flags and proclaiming himself 'the living attestation of the American dream, the extolment of this great nation,' King served up a vivid retort to the prevailing neo-African ethos. 'He was the archetype of a new Negro patriot, which was an unthinkable concept for just about every black person in America at that time,' Rashid Johnson has said. 'In the 1970s, a lot of contradictory symbols and signifiers were occupying the same space in national consciousness. One moment, everyone was wearing dashikis and looking for their African roots. Suddenly that all stopped and they were listening to hip-hop and watching shows on the Black Entertainment Network. I'm interested in exploring that sort of seismic change, looking into the space between things that came before and after. For me the undefined, in-between space is where it gets interesting.'

Engaging that 'in-between space', 'RUMBLE' will present a series of works on both floors of Hauser & Wirth New York, investigating the roles of aggression, humor, art, neurosis, alternative languages and invisible codes in the ways identity attains shape within a larger cultural context. Among works on view, visitors will find what the artist describes as 'a creole puddle' of disparate influences drawn from high and low culture. These range from the art of such Post-War abstractionists as Norman Lewis, Carl Andre and Joseph Beuys, to low-budget Blaxploitation films and the secret traditions of black college fraternities.

'RUMBLE' will include the short film 'The New Black Yoga', documenting a dance-like movement piece originally inspired by Johnson's attempts to learn yoga while in Berlin, where his inability to understand German thwarted both his physical and intellectual mastery of the poses. Awkwardly imitating the instructor and creating his own versions of yoga poses, Johnson was reminded of a martial arts-cum-dance sequence in the 1970 Martin van Peebles movie 'Watermelon Man', which tells the story of a white bigot who awakes one morning to find he has become black. Layering these and other associations, Johnson's 'The New Black Yoga' is a poignant wit-laced visual poem about improvisation, sampling and invisible codes, and the roles these play in the evolution of persona.

The theme of invisible codes courses throughout the rest of 'RUMBLE'. A still from 'The New Black Yoga' appears in another gallery alongside a monumental hanging sculpture that reads as a painting, frontal and indexical. But instead of paint on canvas, the work is an assemblage of mirrored tiles arranged in a deliberate, complex geometric pattern. This carefully ordered composition is interrupted by gestural scratches and cracks in the glass. Scratched across the surface of the work, the word 'RUMBLE' references the energy and aggression of impulses that disrupt and can lead to change.

In the gallery's central ground floor space, Johnson will present a blackened steel circular construction filled with leather-bound books, each bearing the title 'Black Yoga' in gold on its spine. Equipped with a working CB (community band) radio and antenna, this sculpture evokes both a library and a pirate radio station - a jury- rigged communications tool suggesting anonymity and interpretive freedom. In the same room visitors will find two major wall pieces. One of these is a mirrored tile composition, punctuated by small shelves. Each shelf holds an everyday object that is significant to Johnson but that, removed from context, suggests a mysterious canon. The other wall piece on view is made from red oak planks that the artist has fire branded with layers of ambiguous charred symbols. Here Johnson unveils a carefully constructed visual lexicon for which there is no literal translation. Among his burned out symbols is the icon for The Boulé, the African-American fraternal society founded in 1904 and populated by some of the most accomplished and elite black citizens of the United States (with President Barack Obama rumored to be among them).

At the rear of the gallery's ground level, a square sky lit space will be outfitted with a fragrant burned red oak floor, Rashid Johnson's sensual inversion of the language of official cool white Minimalism. Here, the artist says, he is 'giving agency to the last thing people notice, since the floor is almost always the last thing anyone considers.' On the walls above this literal and figurative platform for renewed awareness, Johnson will present a large-scale abstract painting made with melted black soap and wax. One of Johnson's ongoing 'Cosmic Slop' series, named for the landmark 1973 Funkadelic album that contained songs with such freighted titles as 'You Can't Miss What You Can't Measure', the painting will be accompanied by several bronze casts made from it. Just as Johnson's mother attempted to capture fleeting moments by bronzing her children's baby shoes, the artist attempts to capture here what cannot be measured.

Rashid Johnson was born in 1977 in Chicago IL. He received his BA in photography from Columbia College in Chicago and in 2005 was awarded his MFA by the School of the Art Institute of Chicago.

In 2001, Johnson's work was included in 'Freestyle', an exhibition at the Studio Museum in Harlem curated by Thelma Golden. The show featured 28 up-and-coming artists whose work Golden considered to be 'post-black', a term defined by Golden as 'characterized by artists who were adamant about not being labeled as 'black' artists, though their work was steeped, in fact deeply interested, in redefining complex notions of blackness'. Johnson, 24 at the time and the youngest artist in the exhibition, presented photographs from his 'Seeing in the Dark' series of portraits of homeless African-American men in Chicago. The work drew critical attention, and since then, his practice has become central to the post-black movement.

Johnson's mixed-media practice incorporates a wide-range of everyday materials and objects, including wax, wood, steel, brass, shea butter, ceramic tile, books, records, VHS tapes, live plants, and CB radios. With shamanistic inspiration from both African-American and art history, many of Johnson's more recent works employ these materials in a way that suggests an indefinite form of mysticism and a role as devotional objects. Johnson's work has been exhibited at the Museum of Contemporary Art in Chicago, the Art Institute of Chicago, the Walker Art Center, and the 54th Venice Biennale 'ILLUMInations', amongst others. In 2009, he had a solo show at Sculpture Center in New York, and he is currently preparing for his first major solo museum exhibition, opening at the Museum of Contemporary Art in Chicago in April 2012. In autumn 2012, the South London Gallery will present Johnson's first solo show in the U.K.