After two years of 'living research' residencies, home productions, town meetings and affinity actions, GDR opens up in an extensive exhibition. Casco invites all those who have a stake in transforming the conditions and status of the domestic sphere to challenge current divisions between our private and public spaces and to build new forms of living and working in common. The works produced are made up of a combination of proposals, parallel pieces, historical paradigms and situated research material that confront and actualise the thematic threads above. Some works do this through paradoxical commentary and others by mobilising movement. 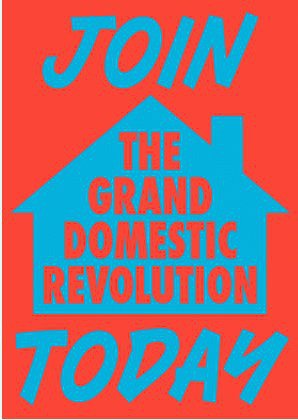 Casco – Office for Art, Design and Theory cordially invites you to join us for the opening of the project exhibition ‘The Grand Domestic Revolution – User’s Manual’.

In October 2009 Casco initiated ‘The Grand Domestic Revolution – User’s Manual’ (GDR) in response to an invitation from ‘Utrecht Manifest: Biennial for Social Design’ to develop a project that would question and challenge the very notion of social design. With the aim of re-articulating and exercising notions of the social, the public and the commons, and departing from the grounds of the domestic sphere, GDR evolved into a long-term research platform and residency exploring the urgent domestic concerns of today and the potential transformative ways to engage them. Inspired by the late nineteenth-century American “material feminist” movement which brought about what architectural historian Dolores Hayden later referred to as “the grand domestic revolution” by the communalising of kitchens, nurseries and housing, GDR focuses on the question of what difference a changed domestic sphere could bring to towns, cities and society at large today.

After two years of “living research” residencies, home productions, town meetings and affinity actions, GDR opens up in an extensive exhibition to share the resulting proposals and paradoxes for a grand domestic revolution today. Casco invites all those who have a stake in transforming the conditions and status of the domestic sphere to challenge current divisions between our private and public spaces and to build new forms of living and working in common.

OUR PROCESS
For the first year of the project, we rented an apartment in the neighbourhood of Casco as a symbolic and functional base inviting resident artists, designers, theorists, neighbours and local activists to build up an evolving and collaborative process of living research in the contemporary private domestic realm, with a special focus on the built environment and its boundaries. Growing into its second phase, GDR proceeded from the apartment base and moved further into the city of Utrecht and beyond, to connect to current social and political dynamics of private and public concern and hone our collaborative approaches in terms of collectivity, alliances, affinity and conflictual processes.

From this, four main themes emerged that have become the lines of thought for engaging the large scope of GDR research, proposals and works thus far:
- Domestic space: housing the commons and living together
- Domestic work: invisible labour and working at home
- Domestic property: struggles between ownership and usership
- Domestic relations: extended families, neighbours versus networks

The works produced, gathered and referenced for the GDR exhibition are made up of a combination of proposals, parallel pieces, historical paradigms and situated research material that confront and actualise the thematic threads above. Some works do this through paradoxical commentary and others by mobilising movement. They all work together to conceive an exhibition of elements and positions that not only suggest why and how to make a domestic revolution, but also ask what position you as the visitor might take, from and beyond your own home base.

Exhibition design is by Ruth Buchanan and Andreas Müller. Exhibition map and signage is developed by Åbäke. Curated by Binna Choi and Maiko Tanaka

LOCATIONS
The works themselves will perform their positions in dialogue with the exhibition themes across Casco and other venues shared by our neighbours:

Casco is transformed into a living and working space, functioning as “home base” of the exhibition and further actions. It is also where GDR’s cooperative sitcom ‘Our Autonomous Life?’ is produced and screened, and includes space for children and the GDR library.

The Volksbuurt Museum finds its seed in Committee Wijk C, founded in 1974 to preserve and recover the neighbourhood, where Casco is also situated, in response to rapid urban renewal and demolition projects. GDR works will be cohabiting with the various documents and objects in this local folks’ museum. A fledgling GDR apartment “museum” will be also be annexed here!

De Rooie Rat is the oldest leftist political bookstore in the Netherlands, established in 1974 just up the canal from Casco. Works that call for action mingle with the inspiring books at De Rooie Rat!

Watch out for the following activities throughout the exhibition! We kindly request you to check our website before your visit for an up-to-date schedule.

GDR’s cooperatively produced situation comedy, ‘Our Autonomous Life?’ will premiere on the occasion of exhibition opening. Future episodes will be broadcasted monthly on RTV Utrecht and at Casco.

Preview trailers will be screened at SKOR’s symposium ‘Social Housing – Housing the Social’ on 4–5 November 2011, and Impakt Festival’s Panorama Programme on 4 November 2011.

Alongside their monthly read-in actions, the Read-in collective organises a series of ‘Teach-in’s with invited respondents relating to their research. The November session is facilitated by Annie Fletcher on the topic of feminist reading groups. Check out www.read-in.info for future dates!

In conjunction with ‘The Grand Domestic Revolution – User’s Manual’, Amsterdam’s W139 transforms its premises into a communal kitchen for divergent communities in art, culture and other public sectors to exchange their concerns and knowledge and to imagine further different forms of living and working “after the revolution”, through the language of cooking and meal sharing.
http://w139.nl

Agency, a Brussels-based organisation established by artist Kobe Matthys in 1992, invites a diverse group of concerned guests to respond to the witnessing of ‘Thing 001359 (Chico Mendez Mural Garden)’ which concerns the demolition of a communal garden in New York.

Collective futurist fiction-writing conference and Home School workshops for the future of a grand domestic revolution with guest practitioners from overlapping fields of architecture, community economics, critical theory and geopolitical research and activism. The future is not far, perhaps it is right here and now! Detailed programme and call for participation will be announced soon!

'The Grand Domestic Revolution - User's Manual' is a project developed by Casco - Office for Art, Design and Theory.

For more information on the programme, please contact Vincent Wijlhuizen call 030 231 9995 or vincent@cascoprojects.org