Black and White Line Paintings 1989 - 2011. The show presents one type of painting that the artist has made and returned to making over a twenty five-year period. 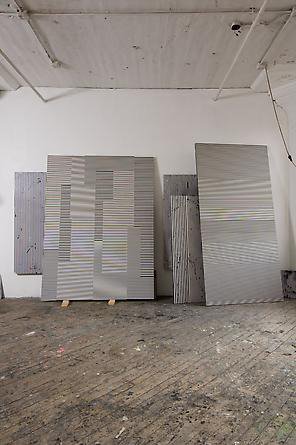 Gering and Lopez Gallery is pleased to present Michael Scott Black and White Line Paintings 1989 – 2011. This is the artist’s fourth solo exhibition with the gallery.

Scott describes the process of returning to this formula in his work over the years:

“Over the last twenty five years my work has taken several forms of expression, from concentric circle or target paintings, to black and white line paintings, to photographs, to cartoon-inspired drawings, to paintings that can be described as psychedelic ‘candyland’ themed landscapes, to small thickly painted encaustic abstractions. However, over this period of time, the most predominant works are the “highly optical” black and white line paintings done since 1989. These are probably the works for which I am best known.

In 1994 I stopped making abstract line paintings but I returned to this type of work in 2002 and 2003 and then most recently in 2010 and 2011. It is this grouping of highly optical black and white line paintings around which I have built this exhibition.

I do not intend for this exhibit to be a survey show or retrospective as it is does not attempt to explain my history as an artist. Rather it presents one type of painting that I have made and returned to making over a twenty five-year period - one that has taken different forms with each re-investigation.”
Michael Scott