The Return of the Tamagni Collection

To the Stars Through Difficult Paths. This show presents in its entirety the donation that started anew the institution's collection, curated by Felipe Chaimovich and Fernando Oliva, presenting, side by side, far past and recent past through works by artists such as Tarsila do Amaral, Aldo Bonadei, Chelpa Ferro, and Laura Lima. 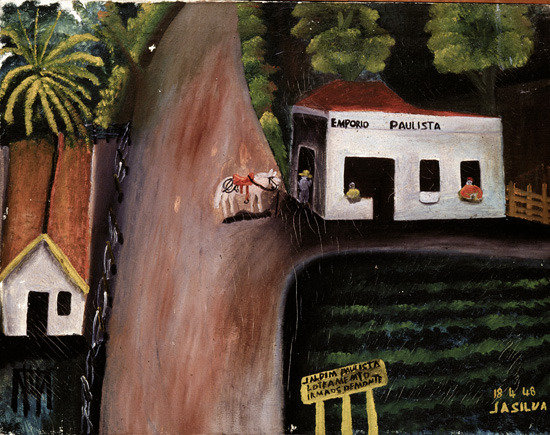 Museu de Arte Moderna de São Paulo reenacts its own history with the exhibition The Return of the Tamagni Collection: To the Stars Through Difficult Paths, opening on January 12th (Thursday), from 8 pm

This show presents in its entirety the donation that started anew the institution's collection, curated by Felipe Chaimovich and Fernando Oliva, presenting, side by side, far past and recent past through works by artists such as Tarsila do Amaral, Aldo Bonadei, Chelpa Ferro, and Laura Lima.

The Museu de Arte Moderna de São Paulo revisits its own history in an analytical manner with the exhibition The Return of the Tamagni Collection: To the Stars Through Difficult Paths (O retorno da Coleção Tamagni: até as estrelas por caminhos difíceis), opening on January 12th (Thursday), from 8pm. This is the first exhibition, since 1968, of the entire collection posthumously donated by Carlo Tamagni (art collector and board member of the museum) in 1967 to the Museu de Arte Moderna de São Paulo. This show, curated by Felipe Chaimovich and Fernando Oliva, promotes a debate about the role of MAM-SP throughout its path. That includes the period from when the institution lost its entire original collection, donated to USP in 1963, until the estate of Tamagni arrived in 1967, and the return to its own fixed location (the same building it occupies today) in 1969, to now.

The Fora do Eixo collective will be in charge of the DJ Residente 2012, a project presenting soundtracks for the different spaces at the museum, including exhibition rooms. To accompany the first exhibition of 2012, the collective explores collaborative compositions among their members and invited guests, with a performance during the opening cocktail party.

Instead of taking a descriptive or definitive stand regarding MAM-SP's trajectory, the curators had as starting point the concept of reenactment by British philosopher and historian Robin George Collingwood (1889–1943), who deems renewed literal putting together of past events as impossible, given insurmountable differences in space and time. According to Collingwood's view, it is possible to reenact past facts, that is, they can be re-assembled within their inherent restrictions, and the visitors will complete that process through their presence in the exhibition space and their participation, taking into account time distance and analyzing the many factors that contributed to the event in question. The setting of the exhibition itself contributes to this result.

A crucial aspect of the museum's history will acquire new possibilities of understanding: the period between 1963 and 1968, when, deprived from its original collection, the Museu de Arte Moderna de São Paulo existed only as a name, without any works or a true physical space other than scanty office spaces, while board members such as Giselda Leirner and Henrique Mindlin fought for the maintenance of MAM's existence, its name, and its role in the national and international artistic scenes.

This dramatic phase is presented through papers and letters resulting from research accomplished by Fernando Oliva, such as those sent by MAM's board to American tycoon and founder of MoMA, Nelson Rockefeller. A letter written by critic Mario Pedrosa is also part of the show, in which he mentions "measures to save MAM of São Paulo" and "observations aimed at the museum's future president".

These aspects of the museum's rebuilding and its return to an active and relevant role in the national artistic scene gain new dimensions with documents that were unknown for the public up until now. Now it is possible to understand not only what happened behind the curtain at MAM, but also the consolidation of a Brazilian artistic scene as a whole. Departing from Museu de Arte Moderna de São Paulo's emblematic bumpy trajectory, today committed to debating new issues arising every day in the world of art in Brazil and abroad, spectators follow a history that starts in the past and advances towards the new paths of art in the 21st Century.

Besides exhibiting the collection in its entirety for the first time in the museum's definitive location, as its first and only total exhibition happened in 1968 in a borrowed auditory at Avenida Paulista, the show enhances the heterogenic character of this estate by including contemporary works, particularly Máquina curatorial, by Nicolás Guagnini. That work, consisting of many different propeller-shaped panels, will be the support for works and papers present at the exhibition.

The predominant character of the Tamagni Colllection is modernist, with works by Tarsila do Amaral, Aldo Bonadei, and Francisco Rebolo; however, it subtly flirts with the avant-gardes of the 1940s–50s in works by Fernando Lemos, Livio Abramo, and Arnaldo Pedroso d'Horta, among others. In order to highlight even further the different paths MAM's collection has taken throughout its history, contemporary works such as Totó treme-terra, by Chelpa Ferro collective; and Palhaço com buzina reta – monte de irônicos, by Laura Lima, are scattered through the exhibition space.

Curators
Felipe Chaimovich, curator of the Museu de Arte Moderna de São Paulo since January 2007, was born in Chile and is a Brazilian settled in Brazil. He has earned a doctoral degree in Philosophy from Universidade de São Paulo and is Associate Professor of Visual Arts at FAAP. He is member of the Associação Brasileira de Críticos de Arte [Brazilian Association of Art Critics] and of the Comitê Brasileiro de História da Arte [Brazilian Commitee of Art History]. As a curator, he has realized the exhibitions Panorama of Brazilian Art 2005, Cinqüenta 50, 2080, Sono da razão, Dez dias de arte conceitual no acervo do MAM and Duchamp-me (MAM-SP), Forma perversa (Galeria Luisa Strina) e Ouro de artista (Casa Triângulo/ Projeto Leonilson), among others. He has written a book about the artist Iran do Espírito Santo (São Paulo: Cosac Naify, 2000).

Fernando Oliva is a curator and lecturer based in São Paulo. He is a member of the Videobrasil Festival Curatorial Committee; and editor of the publication Cadernos Sesc_Videobrasil. His curatorial projects include Cover = Reenactment + Repetition (Museu de Arte Moderna de São Paulo, 2008); Communism of Form - Sound+Image+Time: The Strategy of the Music Video (Galeria Vermelho, 2007) and À Chinesa/À la Chinoise + The Site Specific (Microwave New Media Arts Festival, Hong Kong, 2007).