Snohetta: Architecture, Landscape, Interior. The exhibition is made up of eight units which present the firm and its work in a varied and a vivid way. Karen Agnete - My Dreamland in the North highlights the types of paintings she concentrated on; portraits, moods of nature, flowers and still life. The show's title is a line from a poem by Einar Benediktsson. 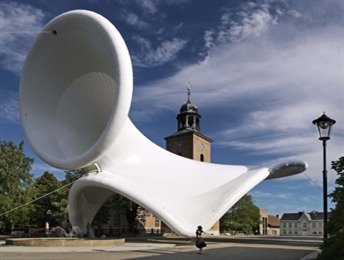 Curated by Eva E. Madshus, Senior Curator at The National Museum of Art, Architecture and Design

Norwegian National Opera and Ballet - photocredit Jens PassothThe international recognition that the architecture firm Snøhetta has received is quite unique in a Norwegian context. The firm has won two open, international competitions: Bibliotheca Alexandrina and Oslo’s new Opera House, which have become landmarks in their countries. On the firm‘s 20th anniversary in 2009 a major exhibition opened in Oslo’s new National Museum – Architecture. This exhibition at Kjarvalsstaðir displays highlights from the original exhibition. The exhibition is made up of eight units which present the firm and its work in a varied and a vivid way. The exhibition has been commissioned by the Norwegian Ministry of Foreign Affairs and is produced by Norway’s National Museum of Art, Architecture and Design in close collaboration with Snøhetta.

Karen Agnete Þórarinsson
My Dreamland in the North

The painter Karen Agnete (1903-1992) was one of many Danish women who married an Icelander and moved with their husband back to Iceland from Copenhagen in the first half of the 20th century. Both she and her husband studied at the Danish Art Academy and she was fascinated by Iceland and Icelanders. For six decades she painted and exhibited her works all over Iceland and became a respected and well known painter here. This exhibition highlights the types of paintings she concentrated on; portraits, moods of nature, flowers and still life. The exhibition’s title is a line from the poem “Bláskógavegur” by Einar Benediktsson.

Architecture and Time Travel
An open and informative art workshop for families set up in connection with the exhibitions in the West Wing. Snøhetta is a Norwegian architect firm located in Oslo and New York. Karen Agnete was a painter and the Danish wife of painter Sveinn Þórarinsson. She left the sophisticated bourgeoisie of Copenhagen and moved to Iceland and into a turf house. The characteristics of Icelandic architecture are found for instance in turf houses, houses clad with corrugated iron, and later concrete buildings.