Point of no return

Exhibited work will be destroyed or abandoned at the end of the exhibition, leaving only traces in the buildings rich history. 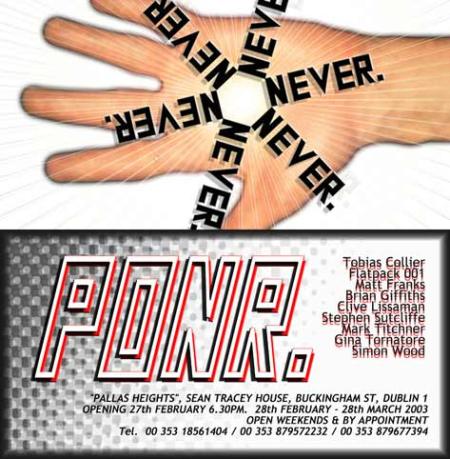 In collaboration with Pallas Studios

These are the last things, she wrote. One by one they disappear and never come back. I can tell you of the ones I have seen, of the ones that are no more, but I doubt there will be time. It is all happening too fast now, and I cannot keep up. I don't expect you to understand. You have seen none of this, and even if you tried, you could not imagine it. These are the last things. A house is there one day, and the next day it is gone. - Paul Auster, In the Country of Last Things. Two semi-derelict apartments in a north Dublin tower block form the context for the diverse range of London based artists asked to respond to the space and create work in situ, developing a dialogue with the history of a neglected area currently undergoing major regeneration.

Through the process of living and working in space originally intended as family council housing, everyday life and fiction blur; the ghosts of those who once occupied the rooms are invoked. Exhibited work will be destroyed or abandoned at the end of the exhibition, leaving only traces in the buildings rich history. " Tobias Collier s works in various media: painting, video, drawing. His practice primarily deals in man's striving toward an understanding of the universe, as in early work 'Coffee Cosmology'. His first solo show was at VTO Gallery, since then the artist has exhibited at Stephen Friedman, Lisson and Tommy Lund, Copenhagen. "


Flatpack001 are Mark Beasley, Steve Beasley and Andy Robinson.
An artist collective, their interests lie in complicating systems of art reception, often taking on the role of Art Directors or facilitators by proposing contexts in which other artists exhibit their work. Past exhibitions include The Showroom and Cubitt Gallery. " Pillaging the history of sculpture and pop culture at large, Matt Franks conflates elements of modernist sculpture, contemporary cartoons and the baroque into playful sculptural forms using everyday industrial materials such as Styrofoam and plastic rubber.

" In a twisted echo of the Victorian miniature, Clive Lissaman creates small figurative paintings with standard colours from a hobbyist model-makers range. Painted in unsettling naive clarity, his images of Wrens and Warblers evoke a contemporary bird man of Alcatraz who longs for escape. Past exhibitions include Karsten Schubert. " Stephen Sutcliffe questions consumer cultures denial of imaginative desire by combining the heritage of British social realist film with the brooding lyrics of Northern pop creating a thoroughly modern 'Saturday night, Sunday Morning' for the late night shelf-stacker. Shows include Anthony Wilkinson, Transmission and Arnolfini. " Mark Titchner conflates seemingly conflicting philosophies through a filter, reconstituting corporate structures, outmoded radical thought and neglected materials to create hybrid sculpture and installation which paraphrase the viral nature of ideology. Shows include Vilma Gold, Richard Salmon, The Approach, ICA and Royal Academy. " Gina Tornatore s recent film production Dead Finks Don t Talk suggests the residue of a volatile event in close-up. The film imitates a suicide, but is in fact the setting up of a homicide. Her work is highly choreographed; motivated by the language of gesture, it displaces action. Shows; Matteo Boetti s gallery Autori Cambi, Rome, MC Magma gallery, Milan. " Simon Wood works with found materials acquired from supermarkets and convenience stores. He converts these household consumer items into surprising and astonishing art works. Wood s ability relies in distilling an unmistakable message by shifting the everyday in his intuitive practice. Simon has shown extensively in the UK and Europe.

FREE ASSOCIATION is a mutable collective of international artists writers and curators who organize and promote projects focussing on global dialog and exchange of ideas. Current personnel are; Jari Lager, Colin Ledwith and Mark Titchner. Please contact us at: Freeassociation3@aol.com FREE ASSOCIATION 2003